LeBron/Carmelo Rivalry Yet To Live Up To Hype

Share All sharing options for: LeBron/Carmelo Rivalry Yet To Live Up To Hype

This was supposed to be it.  The NBA finally had a Bird V. Magic rivalry that turned the NBA from being a tape delay league to a league with a network of its own.  That kind of excitement surrounded NBA Draft night 2003 when the Cavaliers selected LeBron James #1 and Denver picked Carmelo Anthony at #3.  Remember, going into the draft lottery both the Nuggets and Cavs had an equal chance to win the rights to select James and a bit of animosity had been building between the franchises that many thought were tanking the end of the 2002/03 season in hopes of getting the lucky ball.

When it went down the way it did, wit James staying in his hometown and Anthony heading West, pundits proclaimed that these two guys would go back and forth at each other for the next decade.  Never mind that Toronto selected Chris Bosh, or that Miami selected Dwyane Wade, this was the LeBron/Carmelo draft. 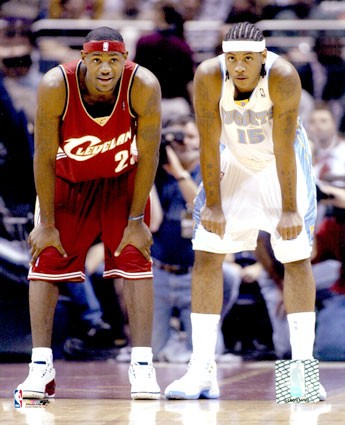 Fast forward 5 years, and everyone's dream rivalry has done very little to live up to expectations.  Part of it has to be that Carmelo's Nuggets have won 7 of 9 meetings between the two teams, staggering considering the Cavaliers have won 145 games over the past three years.  The other part is LeBron's Cavs have had much greter Post-Season success, getting to the Easter Conference Finals in 06, the NBA Finals in 07 and the Easter Conference Semi's in 08.  The Nuggets, while having solid seasons, play in the Western Conference which has meant 50 wins, a 7th or 8th seed and a 1st Round exit at the hands of a team like San Antonio.

Tonight the two teams meet again.  The Nuggets are fresh off the blockbuster deal that sent Allen Iverson to Detroit for Chauncey Billups.  The Cavaliers are 6-2, winners of 5 in a row, and at last look the part of a team that is primed to make a serious run in the Eastern Conference.

What ever the reason, the Cavaliers/Nuggets rivalry that was such a sure thing 5 years ago has fizzled.  To me it is just another game against a team from the Western Conference.  I am hoping for a win much more for what it means in the left hand column in the standings than what it means in a rivalry, made for TV, that doesn't exist.  The Nuggets have had the better of it as a team, but while Carmelo's game has seemed to plateau, LeBron continues to amaze and get better.  In that way, the Cavs have gotten the better of the deal.

A look at the numbers this year --