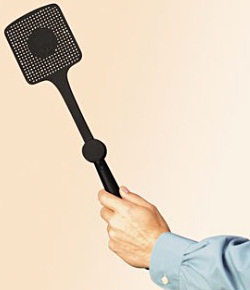 Time To Kill The Injury Bug

Nothing has stopped the Cavaliers so far this season.  At 19-3, the Cavs have the 2nd best record in the League and look to be a title contender.  Everything has been rolling along beautifully as the Wine and Gold has won 10 straight and 18 of their last 19 contests.

The waters are about to get a bit rough.

That nasty little injury bug has reared it's ugly head this week, forcing Mike Brown to alter his rotation for the foreseeable future. It started on Tuesday Night when Daniel Gibson sprained his big toe.  He is expected to miss at least two weeks.  The Cavs hardly missed a beat in jumping out to a big lead in Philadelphia on Wednesday, then that nasty little pest bit again.  With about 9 minutes to go in the game, Zydrunas Ilgauskas came down on the foot of Donyell Marshall. He limped off the court with what has been diagnosed as a moderate sprain to his left ankle.

The team has not placed a timetable for Z other than to say he would miss this weekend's back to back at home against Philly tonight and tomorrow in Atlanta.  After that is anyone's guess.  Personally, I doubt we will see Z until after the New Year - 3-4 weeks.  With all the problems Z has had with his feet the Cavs and Ilgauskas would be wise to be careful.

Mike Brown will now have to dig into the depth of the team and come up with a combination that will keep winning.  Obviously, the Cavs have some depth on the front court with Anderson Varejao and Ben Wallace, especially defensively.  What they lose is substantial offensive production.

Z was arguably having his best season since his All-Star season.  The Cavaliers were feeding the big fella and he was producing.  The Cavaliers will need to find a combination that will make up for the 15 points per game Z brings.

We'll start with Varejao and Wallace.  At the beginning of the season it was a concern how much time these two guys spent on the floor together because of the offensive limitations.  Luckily, Andy has shown a much improved offensive game, especially from the 10-15 foot range.  Let's look at the numbers --

His numbers aren't that far off from what Z was doing.  If Andy can add a couple of buckets in the extended minutes he is likely to get the Cavs should be ok.

What about the depth from the bench?  With Andy likely to start in Z's place, J.J. Hickson and Darnell Jackson are likely to see a substantial increase in minutes played.  Now is the time all of those blow-outs pay dividends.  Hickson and Jackson have seen a lot of action this season already because the Cavs have been able to rest their starters in several games this season.  Jackson even saw big-time action against the Raptors the other night.  Mike Brown has gained faith in his young big-men and now is the time for them to pay him back.

This isn't going to be an easy stretch for the Cavs.  Tonight they face the Sixers for the second straight game, a tough task to beat a team twice in a row.  After tonight the team will head out for 4-straight on the road.  Can the Cavs overcome the adversity?

That will be the big question.  Look for the Cavs to get back to what they do best, play defense.  The games might be closer, they might be a bit uglier, but the Cavs, starting with LeBron James, will take this latest "roadblock" and use it as motivation.  That's what MVP's do, that's what Championship Contenders do.  That's what the Cleveland Cavaliers will do.