Share All sharing options for: The 2001 NBA ReDraft - The Cavaliers Select....

Our friends over at Ridiculus Upside are passing the time by hosting a re-draft of the 2001 NBA Draft.  The Cavaliers, of course, select DaSagana Diop with the #8 pick in the first round.  Several other teams, like the Washington Wizards(Kwame Brown #1 Overall) were also able to right some wrongs.

Here were the picks to date --

So what did I do with my opportunity to be Jim Paxson??

Heading into the 2001 Draft, the Cavs had Andre Miller, Zydrunas Ilgauskas and little else(Ricky Davis?? Puh-lease....).  With all the real scoring threats off the board, I felt the need to go with raw size, similar to what Paxson was thinking.  I was thinking of raw talent and athleticism, where Paxson when the raw, un-athletic route --

With the 8th pick in the 2001 SBNBA ReDraft, the Cleveland Cavaliers,represented by Fear The Sword, select... 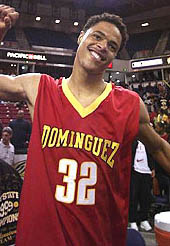 Fear the Sword says: The Cavaliers were already jockeying for position to get a young phenom what was wowing the High School circuit 35 miles to the south.  By drafting Chandler here, the Cavs would get an extremely talented, yet very raw, forward that they had the time to let grow into the player they would need.  At the time, the Cavaliers had two pieces to a puzzle that Jim Paxson couldn’t see would come together.  With Andre Miller at the point and Zydrunas Ilgauskas at center, the Cavs had a nice 1-2 punch.  What they lacked was any type of athleticism on the wing or at forward.  Chandler would give the Cavs exactly that, and since the best pure shooters were already off the board, getting more athletic size was the best option.  Of course, Paxson went after the raw, unathletic, untalented player and the rest was history.

Feel free to leave your thoughts.  Who would you have taken???