LeBron James has made the cover of Sports Illustrated for the 8th time, nearly 8 years after he graced the cover for the first time as a High School Junior at SVSM.  The cover story is entitled "The Power of LeBron" and takes a closer look at why LeBron is 'bigger, stronger and smarter' than before. 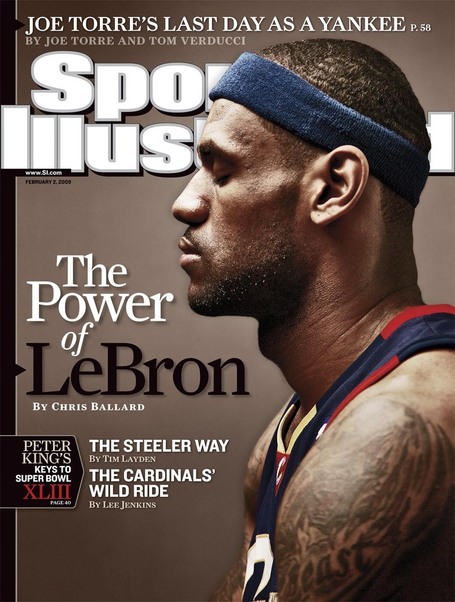 A snippet from the article, which will be seen in the February 2nd issue of SI, after the jump --

There was a moment during last Friday’s Cavaliers-Warriors game when it looked as if Golden State center Andris Biedrins, who is no small man at 6' 11" and 245 pounds, had been sucked out of an airplane hold, so forcefully was he sent flying backward. Biedrins was attempting to protect the rim when Cleveland forward LeBron James came charging down the lane in that straight-line, parting-the-waters manner of his. Gamely, Biedrins took to the air to try to block the shot, and then—whoomp!—next thing you knew he was hurtling onto his backside.

As for the 6' 8" James, he remained both on-balance and on-course, as if he’d merely hit a patch of turbulence on his solo commuter flight-nonstop from basket to basket, departing 15 times nightly-before rattling in a layup. Minutes later he took off again, only this time he toppled two Warriors, then threw down a one-­handed dunk of surpassing violence. Afterward, Golden State forward Stephen Jackson described the perils of such encounters, "As big as he is, you hope he just doesn't run you over and give you a concussion."

And just how big is James, exactly?  Well, that is a matter of intense speculation around the NBA. He came into the league in 2003 weighing 240 pounds and is listed at 250 in this year's media guide, but that number is clearly low.  There are whispers that he goes 265; one report recently had him at 274. "He's at least 260, right?" guessed Jackson, who added that D-ing up James is like "guarding a brick wall."

In an attempt to settle the matter last week I brought a scale to my interview with James at a ballroom in San Francisco's St. Regis Hotel. He laughed, but didn't get on, saying, "I can't let everybody know everything about LeBron," said James, who more than any other star understands the value of mystique. He did joke that he'd "gotten fat"-this from a man with 5% body fat whose raised veins run like tiny interstates up his arms and calves-then hemmed and hawed before confiding that he had gained eight pounds this summer "even though I was trying to lose 10." That said, a Cavs source puts James's weight "between 265 and 270."

Which, considering his extraordinary speed and skill, is staggering. There are plenty of centers who don't weigh that much, including Cleveland's own, 7' 3", 260-pound Zydrunas Ilgauskas. If Magic Johnson was the first big man to play like a point forward, then James is the league's first point linebacker. "He even makes reads like a football player," says Portland Trail Blazers coach Nate McMillan, who worked with James for the last three years on the national team. "And he has enough speed; he could probably play free safety."

Imagine that coming up to hit you on a slant pattern over the middle.  It would be one thing if James were merely an athletic marvel, but his game has grown along with his physique. He's the primary reason the Cavaliers were an Eastern Conference-best 34-8 at week's end-including 20-0 at home-and, for the first time in James's career, a championship contender. Sure, credit also goes to coach Mike Brown, who was wise enough to delegate offensive and defensive game plans to his lieutenants this season, as well as 6' 1" Mo Williams, who is the diminutive Pippen to James's Jordan. But it all comes down to the guy who through Sunday was averaging 27.8 points, 7.2 rebounds, 6.8 assists, 2.0 steals and three mother-of-God-did-you-see-that? plays a game. "You knew the Cavs would be good, but I didn't think they'd be this good," says one Eastern Conference scout. "I didn't think LeBron was going to improve that much, especially defensively. It's not usual to see a guy his age come back better and stronger every year. He really is a freak."

If so, then let us examine this freak who, it should also be noted, has scored almost 12,000 points and is barely 24. By taking the measure of the man, perhaps we can calculate his impact on the game.

For the rest, check out the February 2nd edition of SI.