Share All sharing options for: A win is a win, right? Cavs beat Blazers in OT 97-92 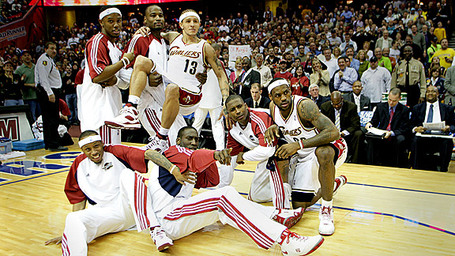 Mama always said there would be games like this. It was ugly at times, unwatchable at others, but the Cavaliers once again found a way, though just in the nick of time, to get a win at The Q, beating a beat up Portland Trailblazers team 97-92 in Overtime.

For the Cavs, the recipe for the win followed many others during their current 7 game winning streak - sleep walk through large portions of the game, keep it close, take control in the 4th quarter. This time, however, the Blazers, behind 24 points from Brandon Roy, kept on coming back, including 4 straight points in the final 25 seconds of regulation to force the OT.

LeBron James, who seemed to take much of the 1st half off, got into the game late and ended up with his 7th Triple-Double of the season(24th of his career).  He also made three straight plays in the OT that sealed the deal for the Cavs.  Leading by 2, James hit a running 5 foot hook shot, LeBron blocked a Travis Outlaw 3, then went inside again drilling an 8-foot hook shot for a 6-point lead and a Blazer timeout.

Relying on jump shots, the Cavs looked sluggish for much of the first half.  Shooting 19%(4-21) in the 1st, the Cavs only scored 12 points and fell behind by 11 early in the 2nd.  That is when the Cavs made an effort to get to the rim.  In the 3rd quarter, the Cavaliers decided the paint was the place to go and stayed there.  The team scored just 8 points in the paint in the first half, then 34 points in the paint in the 2nd half and overtime.  It was definitely the difference.

This is not a game the Cavaliers will put on any type of highlight reel but it is a win and right now that is all that matters.

Next up for Cleveland is another team riding a 7-game winning streak, the Atlanta Hawks, Saturday at The Q.