Share All sharing options for: NBA players want LeBron James on their team

The MVP debate of 2009 is in full force, but one factor that I don't think should be overlooked is what other players feel about the candidates.  Sure, ask them a question about who the best players is, and you are likely to get guarded responses.  Ask a question that is a bit more subtle, such as "Which opposing player would you most like to have on your team?", and, well, the answers are a bit more direct, and to me give a strong indication of who the MVP should be.

Sports Illustrated asked that very question of NBA players as part of their weekly player poll.  While the results will be included in this week's issue, set to hit newsstands tomorrow, FTS was sent a preview of the results --


Not even close.  LeBron James gets 32% of the vote.  That is why LeBron is so valuable.  Players want him because he makes them better.  He trusts them and puts them in a position to succeed.  The Cavaliers know that all too well as the team looks to break the franchise record for win tomorrow night against New Jersey. 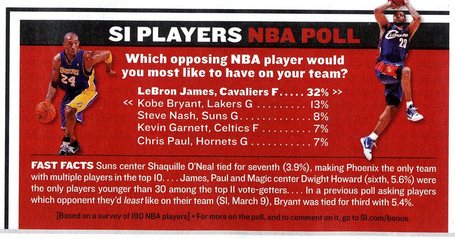 LeBron is about more than individual accolades, but it always has to be special when your peers think highly of you.