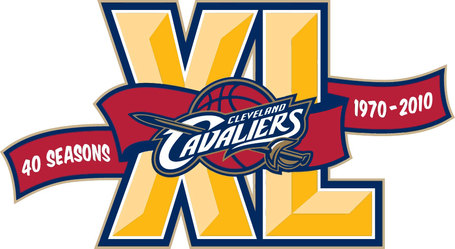 via www.logoshak.com
The 2009-10 Cavaliers season is just around the corner and as the franchise commemorates its 40th anniversary, the future is in focus with an excitement, energy and passion for a season that’s simply XL! The Cavs are hitting the court in an XL way with a season-long lineup of special theme nights, premium fan giveaways and the return of Hardwood Classics Nights (HWC). This year will also boast an All-Star cast of player bobbleheads featuring LeBron James, Shaquille O’Neal and Mo Williams.

Fan Giveaways
Fan favorite giveaways are part of Cavaliers games throughout the year, but they won’t have to wait long to receive their incredible collectibles, with six great giveaways slated for the first half of the season.

Fans won’t want to miss the last regular-season game tradition of Fan Appreciation Day on Sunday, April 11th. It’s the ultimate day of giveaways, when every fan in attendance gets something! At the popular game finale, players will give away the "shirts off their backs and shoes off their feet" as well.

The Cavaliers will remember many great moments and significant milestones with a special series of Hardwood Classic events throughout the 2009-2010 season that commemorate the 40th anniversary of the franchise. Each HWC night will feature an in-game celebration of Cavaliers history, including today’s Cavs wearing classic uniforms.

Theme Nights
Every Sunday home game means it’s "Kids Day" at The Q! Presented by KeyBank, kids will have the chance to shoot postgame free throws on the Cavs court after each game.

Back by popular demand, Guys Nite Out presented by Arby’s is returning! Six games throughout the season offer a specially priced ticket package designed for groups of friends to attend a Cavs game! Each package includes tickets in Loudville, a pregame buffet on the Cavs practice court, a Q&A session with a special guest and Cavalier Girls calendars or 40th anniversary Cavs t-shirts.

McFamily Nights
Cavs fans will be lovin’ it when McFamily Nights return to The Q for 15 Cavaliers home games. The McFamily Night package includes four Cavs tickets and four McDonald’s Meals starting as low as $80 – or $20 per person, that’s a $44 savings! These special nights offer families an affordable way to be a part of the Cavaliers excitement this season!

For a complete schedule of 2009-10 promotional giveaways and theme nights click here.