Share All sharing options for: LeBron James among players named to Team USA 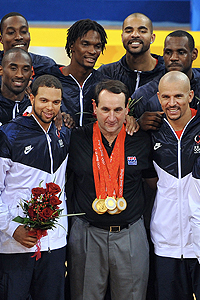 Featuring nine members of  the gold medalist 2008 U.S. Olympic Team and a total of 11 Olympians who  have captured a combined 15 Olympic medals (nine gold medals and six  bronze medals), USA Basketball revealed today 27 players who have been  named to the 2010-2012 USA Men's National Team program.  The selections  were announced by USA Basketball ChairmanJerry Colangelo.

"This is another important step in the reassembling of the USA National  Team for the next three years of competitions that will include the FIBA World  Championship in 2010, and if we qualify, the 2012 Olympics in London.   Unlike 2006-08 when we were first starting the program, this time we have the  benefit of including players who were members of the last national team,  while also incorporating players who were involved in our pipeline the last  couple of summers," said Colangelo, who also served as Managing Director  of the 2006-08 USA National Team.

James, Wade and Bosh are all questionable to actually play this summer, though. All three can become free agents and have said their contract situations are their first priority.

"Special recognition and acknowledgement needs to go to the nine players  returning from our 2008 Olympic Team. They have demonstrated that they are  the heart and soul of our program and their commitment to continue to  represent their country should not be overlooked.

"Just as was the case in 2006-08, the composition of the USA National Team will be fluid and by that I mean there could be additions to this group.  We've learned to expect that you may have injuries; there may be special circumstances where players can't perform, so you need flexibility with regards to the addition and deletion of players in the program.

"This is the group from which we will build our 2010 World Championship squad. We are taking the Worlds very seriously and know that this is the most important basketball competition in international basketball and it needs to be respected accordingly.  We won gold at the 2008 Olympics because of the team we were able to assemble and build and we'll all be hard at work to do that again, and finish on top in Turkey this summer."

"I'm really excited about the players who were selected and who committed to be part of the 2010-12 USA National Team.  I'm especially pleased that so many members of the 2006-08 team wanted and were able to return," said USA and Duke University Hall of Fame head coach Mike Krzyzewski. "We know from our prior experiences that continuity, team work, and player versatility are critical parts to assembling a team that will be successful.

"With these 27 players we've got a great mix of players who are now experienced in the international game and some of the most promising and exciting players coming up though the USA Basketball program. I know I speak for the entire coaching staff when I say we're excited about this group of players and we're eager to begin our preparations for the 2010 World Championship."