Cavaliers Go Small to get Big Win, 108-88 over Celtics

Share All sharing options for: Cavaliers Go Small to get Big Win, 108-88 over Celtics 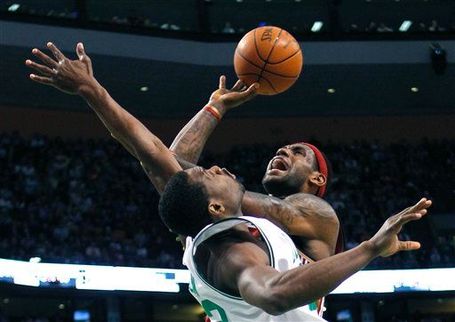 **The following game recap was posted by FTS member WaveOcean**

It could not have started off any worse for the Cleveland Cavaliers.

It could not have ended any better.

The Cleveland Cavaliers came into Boston, having not won since January 3, 2007, overcame a 13-point deficit, and shut down the Boston Celtics 108-88.

This has to be our best win of the season. More than the win at the LA Lakers. In that game, we dominated almost the entire afternoon. Also more than the win in Miami, because we came back immediately at end of the 2nd quarter and stayed with the Heat all game long.

1st quarter notes: A miserable defensive effort all around. I hardly recognized the Cavs as the Celtics were getting multiple fastbreak opportunities andRajon Rondo was in the middle of every possession. Players weren't communicating properly and the Celtics were getting shot after shot in the paint simply by passing to either a wide open KG or a wide open Kendrick Perkins. It didn't help that our offense was poor, with the starting lineup giving very little help to LeBron and missing lots of shots. Boston raced out to a 21-12 lead and finished 31-21.

2nd quarter notes: Things didn't improve much in this quarter. The Celtics handed the ball to Nate Robinson, Rasheed Wallace, or Ray Allen, and no Cavalier could get to them in time to stop them from scoring 3 pointers at will. Boston was shooting 73% and 100% from beyond 3 point range while the Cavs were stuck in the 40s. They stretched the lead to 12 and Cleveland called a timeout. Our only scoring options were Shaq or Varejao, who by themselves kept Cleveland in the game. Although we cut the lead to 7, Shaq was hit in the thumb and had to sit out the rest of the game. Cleveland was on the verge of getting blown out of the building. My only thought in the second quarter was, "Get it to 9. Get it to 9." And they did, with LeBron finally connecting from 3 point range to cut the deficit to 8 at halftime. There was still hope.

3rd quarter notes: I'll admit it, we had some help. The Celtics cooled off and started missing shots they would have made in the first half. But our defense improved significantly, as we started filling the paint with more bodies, grabbing more rebounds, and making things harder for the Celtics. With the Boston lead at 7, Antwan Jamison, who had been a train wreck for most of the night, hit 3 straight shots, catching the Celtics completely off guard and helping to fuel a Cavs run that brought us back all the way to within 1. Heading into the 4th quarter, an unfamiliar feeling came over the Celtics: we had the momentum approaching the homestretch, not them.

4th quarter notes: There's no sugarcoating it: Cleveland exploded and Boston fled in terror. Playing suffocating defense, we forced steals and bad shots, making the Celtics miss 6 of their first 7 shots. They would finish with a meager 14 fourth quarter points. And the Cavs? You want offense? First, the Cavs took the lead for the first time since leading 6-4 and stretched it to a 6-point margin without LeBron, thanks to some timely shots by JJ Hickson andDelonte West. During that stretch, Mo Williams made a shot. He had been struggling all night long, but that 20-point jumper finally awoke him from a deep slump he'd been playing through since he came back from injury. Second, when LeBron checked back in, the Cavs decided to try and help Mo regain his confidence, so they gave the ball to him and let him shoot. And Mo hit three straight 3-pointers to push the lead to 10. Timeout Boston By this point, there weren't many Celtic fans in attendance  with any air left in them, and the Garden crowd grew smaller and smaller throughout the 4th quarter. Likewise, the Celtics shrunk to shells of their first half selves, missing every basket and getting outraced to every loose ball. But Cleveland was riding a magic carpet of emotion and never let up, stretching the lead to 20 and going out with a bang.

Am I missing anything?

Oh yeah: To anyone who wants to make the excuse for Boston that they played without Paul Pierce, I don't want to hear about it. We played with no centers for almost 3/4s of the game. You can't win this argument.

I'll just wrap it up with the usual stats:

LeBron James: 11-23, 3-6 3PM-A, 11-15 FTM-A, 36 points, 7 rebounds, 9 assists. LeBron was sensational tonight. He would not let anyone contain him, willing himself to the line and the basket. He refused to settle for quick 3s, which is a welcome sight to all Cavs fans. No matter how poor the Cavs offense looked, LeBron never stopped chugging along.

Anderson Varejao: 6-7, 14 points, 10 rebounds, 3 blocks, 36 minutes. It is my opinion that without Varejao, we would not have won that game. His scoring and movement was the one bright spot in what was otherwise a gloomy second quarter and his presence on the boards was so good, he looked like the 2004 version of Ben Wallace.

JJ Hickson: 4-6, 8 points, 4 rebounds, +27 in 23 minutes. In case anyone was wondering, that's why I'm so peeved that Hickson may be getting robbed of his normal minutes in the rotation. He's a dominant forward with amazing amounts of energy and can provide great sparks. This was one of his better road games, too.