The Cavaliers will unveil their new uniforms later today in Cleveland, but the NBA Store just can't wait to get the design out. 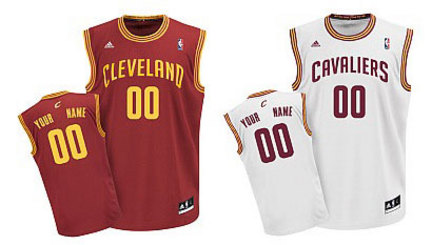 The uniform release comes a day after Cavaliers Owner Dan Gilbery tweeted that the uniforms would include the Comic Sans font, a small dig at himself for the LeBron letter which was released in Gilbert's favorite font - Comic Sans.

Anyone know if Twittr will be offering Comic Sans font option soon? Cuz this Lucida Grande is killing me..btw new @cavs unis r in Comic Sansless than a minute ago via web

The block-lettering seems more likely, but you have to love a millionaire with a sense of humor!

What do you think?