The Cleveland Cavaliers unveiled the team’s new authentic uniforms for the 2010-11 season in front of an enthusiastic crowd of Twitter followers and others who attended the "Tweetup" event on Tuesday evening, hosted by the team. They were the first to see the "new expression of wine and gold" home and road authentic uniforms that reflect the colors and style elements from the earliest years of the Cavs. 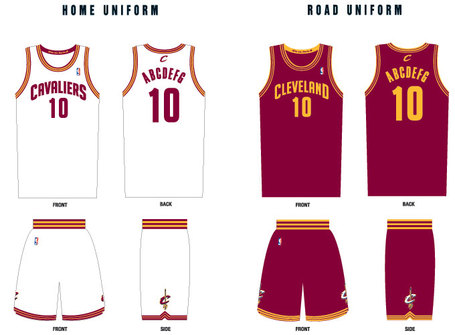 The authentic adidas® uniforms feature a deep wine and bright gold that echo the hues from the early 1970s, with a simplistic, yet bold, design and introduce several new and unique design elements. The front of the home white jersey displays a new official team wordmark "CAVALIERS" in wine across the chest, and the front of the road wine jersey the new wordmark reads "CLEVELAND" in white.

On both uniforms, special details make them distinctive. The Cavaliers DNA statement: "All for One. One for All." is printed along the back of the inner-collar of the crew neck jersey, and the Cavaliers secondary logo "C-sword" appears on both sides of the shorts. The team will debut the uniforms when they take the court for the first 2010-11 preseason game on Tuesday, October 5th at 7:00 p.m. vs. the Charlotte Bobcats at Quicken Loans Arena.

For the "Tweetup," @CavsDan (Cavaliers majority owner Dan Gilbert’s Twitter handle) invited Twitter followers to come together for the unveiling at Cadillac Ranch, a bar and eatery in downtown Cleveland, at 5:30 p.m. on Tuesday, August 17th. His tweet was immediately "re-tweeted" by many followers and the news of the special event spread across numerous social media platforms. The reveal took place as Cavs Legends Austin Carr and Campy Russell opened large gift boxes to lift out the new authentic uniforms for display.

"The ‘Tweetup’ was a fun and exciting way for the team to connect with some of our most passionate fans in a very direct way and reward them. Social media is a rapidly expanding space and we’re always looking for ways to use these fan-friendly, cool and effective new communications tools," said Cavaliers and Quicken Loans Arena President, Len Komoroski. "We now have over 50,000 followers on Twitter and over 300,000 on Facebook alone. As an organization, we want to embrace new technology, break the traditional models and try new things. This is an example of that."

The new team colors update and uniform designs also reflect the considerable feedback the team has received from fans and the popularity of the Cavaliers’ Hardwood Classic line of merchandise and uniforms. Those designs have featured retro styles and colors from the team’s earlier years. Replica player jerseys are available now at the Cavaliers Team Shop at The Q and online at cavs.com. The opportunity to purchase and/or order additional "swingman" and "authentic" game jerseys and shorts at cavs.com and the Cavaliers Team Shop will be available as soon as these versions are available from adidas®. (The team shop is temporarily located on the main concourse of The Q near the Time Warner Cable Entrance to the arena while the permanent team shop is undergoing an extensive renovation and expansion this summer.)

The 2003-04 season was the last time the Cavaliers introduced a new jersey, which featured a "new expression of wine and gold" with the crimson-hued wine color and a metallic gold reverting from the blue, black and orange team colors during the mid 1980s, 1990s and early 2000s. A full history of team colors and logos can be found here on cavs.com.