The Cavaliers broke out a new court for the 2010-11 NBA season. It appears as though they are changing it once again for this upcoming season.

Once that guy took his talents to South Beach, the Cavaliers underwent an enormous rebranding project. They changed uniforms and redid their home court. According to a tweet from Cavs owner, Dan Gilbert, Quicken Loans Arena will have a new-look court once again this 2012-13 season.

The previous court had the crossing swords and wrote out the word 'Cavaliers'. This one just swapped it out with a simple "C". I think this one looks pretty clean and has a lot less going on. What do you think? 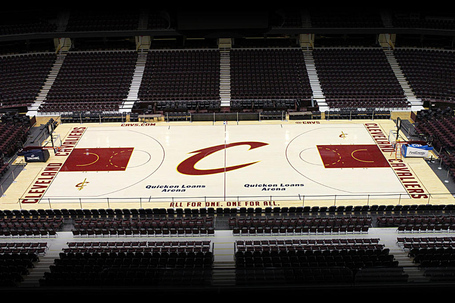