The Cleveland Cavaliers welcomed the Washington WIzards to Quicken Loans Arena for the very first game of the 2012-13 NBA season. Both teams were trying to kick the season off on a good note, but in the end, the Cavs took down the Wiz by a score of 94-84.

One game, one win. Just 81 left in order to be the first team in NBA history to have an undefeated season. The Cavaliers started this potentially historic campaign with a 94-84 victory over the Washington Wizards. The Cavs dominated for a good portion of the game, but the Wizards made a big run in the early fourth quarter to take the lead. There was never a doubt, however, as with eight minutes left Kyrie Irving tapped Byron Scott on the leg and said "Don't worry, Coach, I got this." And he did. Kyrie led the Cavs back and they closed out a comfortable 10-point win in front of a packed Quicken Loans Arena.

Man, where to start? I guess I'll start by saying that it is awesome to have basketball back. We'll have to wait for David to comment on the atmosphere within the Q, but it seemed pretty great. The intro video with Machine Gun Kelly was sweet (sorry, Angelo) and the gold uniforms looked slick.

Now let's get to the actually basketball that was played, I suppose. First and foremost, Anderson Varejao was an absolute beast. He was a nightmare for the Wizards all night long en route to grabbing a career-high 23 rebounds, 12 of which were on the offensive glass. TWENTY THREE. TWELVE. He didn't stop there, however. Varejao also added 9 points and 9 assists to come painfully close to a triple-double. His domination cannot be overstated -- it really cant. He out-rebounded the entire Wizards starting lineup, 23-16. Ridiculous. I'm sure we'll have plenty of conversations about the benefits and costs of trading Andy, but if he plays like he did last night, there's NO WAY I'm trading him. He might be capable of changing the game more than anybody else in the league without scoring the ball. He's only 30 years old. He shows no signs of slowing down. The Wild Thing is everything that is great about Cleveland. His energy is contagious. With Varejao and Tristan Thompson in the front court, I wouldn't be surprised at all if the Cavs are the best offensive rebounding team in the league this year. In order to find the last game in which a player put up 9 points, 9 assists, and 23 rebounds, you have to go all the way back to 1987 by Charles Barkley.

In other news, Kyrie Irving is still a stud. The reigning Rookie of the Year kicked off his 2nd season by matching his career-high in points with 29, including several key buckets in the fourth quarter. I forgot how much fun it was to watch Kyrie play basketball. He may have the best handle in the entire NBA and is able to change speeds and find space like no one else can. He also tossed up a lefty hook from 12 feet out at one point. Did anybody know he could do that? I sure didn't. He didn't rack up the assists like Andy did, but his passing appeared to be on point. Furthermore, his defensive effort was far better than we saw last year. You've heard me rave about how good Kyrie is, and I will continue to do so. He's going to be a top-10 player in the league by year's end, book it.

Byron Scott said that this last week of practice had been dominated by Dion Waiters. He said that at one point Waiters came up to him and said "coach, I've got the offense down now." Last night, it showed. With John Wall and Nene out for the Wizards, the biggest matchup storyline was the battle of the shooting guards selected in the top-4 of the 2012 Draft. Bradley Beal was picked 3rd by the Wizards and Waiters was picked 4th by Cleveland. In their first head-to-head battle, Waiters was the unquestioned victor. Any concerns of a rough Summer League or preseason were seemingly tossed out the window. Waiters was aggressive, yet played within the offense. Explosive, yet under control. Obviously we're not going to overreact to one game, but this ought to give us a good idea of what Waiters can do. He won't do it every night, of course, but his 17 points on 6-14 shooting with 3 steals and a couple clutch rebounds is a very impressive debut. His jumper (for the most part) looked good and he seems confident taking threes when he's open. He got lost on defense a couple of times, but you can already see how his strength is going to create several steal opportunities. I wrote about it after Summer League, but Waiters had the same problem of finishing at the rim. He shot 8 of his 14 shots inside the paint, but was able to finish only three of them. 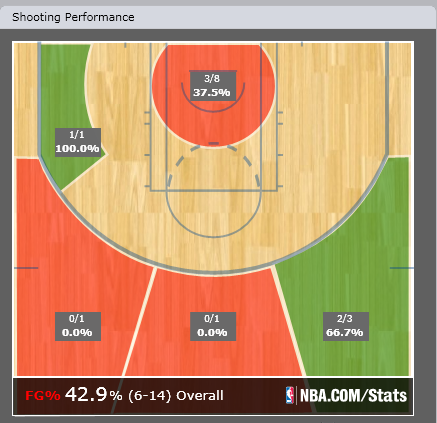 That percentage needs to improve -- and it will. It looked as if Waiters was trying to adjust his shot too much once he got to the rim. He goes for scoop shots when he could just go up strong and lay it in. My personal opinion is that he is still not used to the size and quickness of NBA big men. It seems as though he is trying to avoid getting his shot blocked so badly that he ends up missing the shot on his own. It's kind of like the Dwight Howard effect, except Dwight Howard wasn't playing in this game. I expect it to improve, and once it does, Waiters is going to be really dangerous. He's so quick off the dribble and penetrates at will. In related news, Harrison Barnes scored zero points last night.

Tristan Thompson recorded a double-double in the first game of his 2nd year in the league. Most, if not all, of his points came off dunks - and that's the way it should be. He dunked on three straight possessions in the fourth quarter to help put away the Wizards and also contribute 5 assists. What is it with the big men dropping dimes all over the place? I talked about it earlier, but the dominance on the offensive glass needs to be emphasized again. When Tristan and Varejao were on the floor, the Cavs rebounded an ungodly 60.9% of their own misses. In related news, Jonas Valanciunas scored zero points last night.

On the defensive end, the Cavs were pretty solid as well. The Wizards were held to just 36% shooting, but that probably has something to do with them chucking up 32 three-pointers. The defensive rebounding wasn't particularly good, as the Wizards got 18 offensive boards. Waiters and Irving were a hundred times better defensively than the Cavs backcourt last year and it sure is nice not having to watch Antawn Jamison not play defense. Personally, I'm not buying the defensive numbers. The defensive efficiency of just over 89 points allowed per 100 possessions is not going to happen often. I do think this team will struggle defensively, but against the Wizards without John Wall or Nene, they were just fine.

Things that were not fine, however: the bench. Great Odin's Raven, the bench looked horrible. For whatever reason, Byron Scott felt the need to play Luke Walton with the second unit. Sam is going to have a post about this later, but Scott claimed that he thought the offense ran better with Walton out there instead of his other bench options. Maybe it was something that he saw in practice. Maybe it was wanting to have a veteran presence out there to calm everybody down on Opening Night. I don't think it's something that we will see very often. The bench allowed the Wizards to go on a 16-0 run in the fourth quarter and take a two-point lead. This led to me screaming at my TV for Byron to put Kyrie back in the game. Eventually, he did and everything was okay. I guess they wanted to make it a bit more suspenseful.

Neither C.J. Miles nor Alonzo Gee played particularly well, and that needs to change. The Cavs desperately need one of those guys to step up and claim the bulk of the small forward minutes. Coach Scott did, however, note that Gee played well defensively.

Tyler Zeller looked like he got pushed around a little bit. He was basically a non-factor in the 14 minutes that he played. I expect him to get better as he adjusts to the physicality of the NBA game.

Daniel Gibson hit some threes, which was nice to see. This team could really use some extra shooting.

This could go to Andy or Ky, but Varejao gets the nod for the historic performance. He provided enough energy to restore power to the entire East coast. It was a pleasure watching him play (and watching Wizards fans tweet profanities every time he grabbed an offensive rebound).

The Cavaliers continue the quest for 82-0 when they host the Chicago Bulls on Friday night at 7:30 Eastern. Go Cavs!