Dion Waiters has had an up and down rookie season thus far. His talent on the offensive side of the ball is apparent, if not always consistent. Take a look at where he is struggling on the defensive end.

While watching the Cleveland Cavaliers game against the Memphis Grizzlies, I made a conscious effort to watch Dion Waiters on the defensive end of the floor.

Byron Scott has repeatedly talked about his struggles on defense, but I haven't really noticed Waiters getting blown by very often. That's because his problem isn't staying in front of his man. Instead, it's just staying on his man and recognizing his assignment. I don't have very man questions about Waiters' ability to play defense in the NBA from a physical standpoint. He has enough length and strength to compensate for whatever he may lack in pure height. Thus far, Waiters' defensive struggles are primarily mental (and not entirely his fault). Look at this series of screen shots from last night's game (I tweeted these during the game, but this is worth repeating). 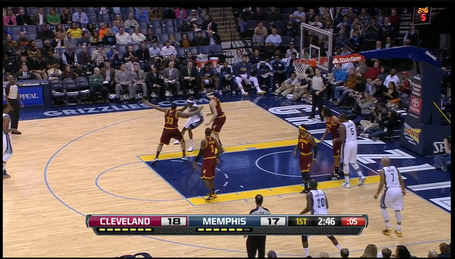 Here you see Zach Randolph backing down Tyler Zeller. That's an obvious mismatch and I assume that the plan was to double him if that occurred. Alonzo Gee comes on the double to force Randolph to either shoot a bad shot or pass the ball out. However, what is Dion Waiters looking at? Why is he just standing there? His man, (Pondexter, #20) is out on the wing and Waiters isn't even looking at him. It doesn't happen in this play, but if Pondexter cut to that area between Waiters and Daniel Gibson, Randolph could hit him with an easy bounce pass for a layup. Here's what happens instead. 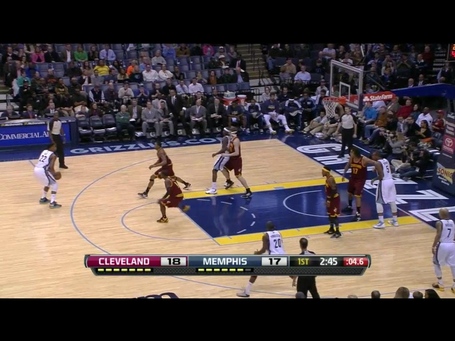 The double-team on Randolph works and it forces him to pass it out to Rudy Gay on the perimeter. Up until this point, this is a pretty good defensive possession for the Cavaliers. Rudy Gay receives the ball at the top of the three-point line with under 5 seconds on the shot clock. Alonzo Gee steps out to guard him (because that's his man). However, for whatever reason, Dion also feels the need to go out to Gay, which means he is leaving his man (Quincy Pondexter, number 20). 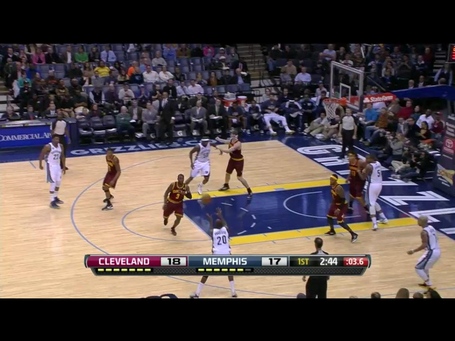 Gay makes a great pass and swings it over to the now wide open Pondexter. Waiters tries to recover as his man receives the ball. 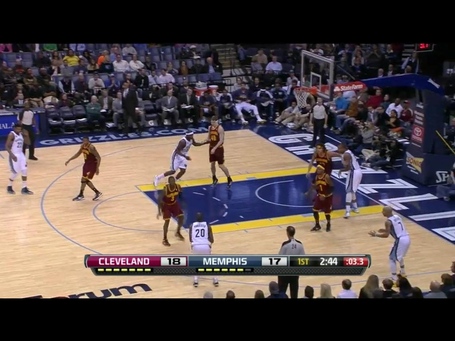 Waiters obviously doesn't have time to recover before Pondexter receives the ball (remember kids, nobody moves faster than the ball) and Memphis drains an open three. An otherwise good defensive possession is thwarted because of a simple breakdown.

Upon first seeing this play, I assumed that it was all Dion's fault. My thinking was that this mental lapse was due to remnants of his habits that he picked up while playing zone at Syracuse. But after watching it again and remembering what Byron Scott has said, I'm not so sure. Obviously, Dion is partially to blame simply because he was in the wrong place and left his man wide open, but it may be more complicated than that. In virtually every postgame press conference, Byron talks about defense. It's been the Cavaliers' biggest problem thus far and while it's gradually improving, they still rank 27th in defensive efficiency. And every time that Byron talks about defense, he talks about communication. Lack of communication or just poor communication is what he points to as the reason for Cleveland's inability to defend. Since we can't really hear what they are saying on the court during games, it's hard to recognize what he means by this or to point to specific examples. Well, I think this is probably a good example of that communication breakdown.

There is no doubt that Dion makes a mistake when Alonzo goes to double Randolph. He's just watching the play happen and completely ignoring Pondexter. However, once the ball gets passed out to Gay, the blame is a bit more ambiguous. At that point, Gee needs to communicate to Dion that he is able to get back out to guard Gay and that Dion doesn't need to help. If there's no communication, you can see why Dion's instincts would simply be to move towards Gay, under the assumption that Gee was still busy with Randolph and wouldn't recover in time. If you can see if the 2nd screenshot, Dion and Gee are approximately the same distance away from Gay. It's not as if Gee was already there and then Dion joined in or watched (like in the first screenshot). It seems like a genuine effort to compensate for the previous double-team.

This lack of communication from Gee and overall bad positioning by Waiters leads to a wide open three for Pondexter. In order for the Cavs to become a good defensive team, they need to work seamlessly as a unit. Waiters needs to know that Gee has Gay covered and that he ought to stay on his own man. Even a slight movement towards Gay makes it difficult for Waiters to change direction and recover in time to contest Pondexter's shot.

The Cavaliers have a long way to go before they become a good (or even average) defensive squad, but many of the mistakes seem rather fixable. Team communication will improve as the season goes on and breakdowns like this will hopefully become less frequent. The Cavs still lack some of the necessary personnel to be above average defensively, but that's for a different article. Until then, practice, familiarity, communication, and ridding themselves of some bad habits should make an enormous difference.