Cleveland Cavaliers vs. Atlanta Hawks: To Suck or Not To Suck?

The Cleveland Cavaliers are on the road one more time in the month of November and this time it's in Hotlanta (people still call it that, right?). Let's see if the Cavs can end the month with a victory.

Share All sharing options for: Cleveland Cavaliers vs. Atlanta Hawks: To Suck or Not To Suck?

I can't really figure this team out. The Cleveland Cavaliers took the Miami Heat and Memphis Grizzlies to the brink of upset, but then collapsed down the stretch. The collapsing down the stretch portion is very Cleveland of them. But the competing with a far superior team without Kyrie Irving? What's that about? Then, they return home from that quick road trip to play a very "meh" Phoenix Suns team --- and get demolished. It's like a fun grab bag. Which Cavs team are we going to get tonight? It could be a fun 2 and a half hours on a Friday night or it could be a thorough waste of time that simply accelerate the weekend drinking process.

Where on my eyeballs? Fox Sports Ohio/ NBA League Pass

Can I still get tickets? Yessir. Cleveland Cavaliers tickets.

Who should win this game? Hawks by 9, according to Vegas.

Music? Gody is gone. But Kevin Jones is on the Cavs now. Is there a Mrs. Jones..?

The Gody Will Watch Over Us:

I'll admit, I miss Luke Harangody. Even though he's still rehabbing his knee from surgery and wasn't traveling with the team (I don't think?), I still felt as though he was with us. And now, he's gone. Whatever will we do?

Fortunately, we do still have Anderson Varejao. And he's an absolute freak. Not only has he been the Cavs' best player, he's been one of the best players in the entire NBA. He's in the top-10 in PER, leads the league in total rebounding and offensive rebounding. He's a monster. Similarly, his offensive game has improved significantly. He doesn't hesitate to take that mid-range jumper that opposing teams repeatedly give him -- and he's hitting them. And his bounce passes are a thing of beauty. I basically love Andy Varejao.

Last night on Inside the NBA on TNT, Charles Barkley said that Varejao has been the 2nd best forward in the Eastern Conference this year. I agree.

As I said a second ago, much of The Wild Thing's improvement on the offensive end is thanks to the fact that he is freely taking that midrange jump shot. And teams keep leaving him wide freakin' open. Here's his shot chart so far this year. 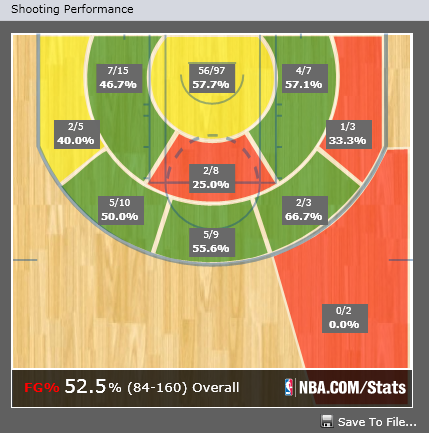 He's not taking a *ton* of those shots, but when he does, he's making them. When the opposing team finally decides to close out, he pump fakes and drives to the hoop for a layup or dishes to someone else. We love Varejao for his rebounding and defense, but his offense has been spectacular this year as well. 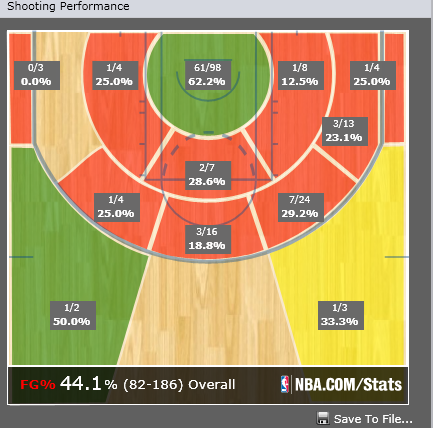 SO MUCH BLOOD. For as ridiculously talented as Josh Smith is, he's probably about 60% of the player that he could be. If he wants to take jumpers tonight, let him. He's devastating on the low block and in transition. But spotting up from 17 feet? Not so much.

The Hawks are actually a pretty damn good team. I mean, they have been for the past several years, but they are probably even better now. By getting rid of iso-Joe Johnson and filling out the roster with skilled role players to surround J Smoove and Al Horford, the Hawks have launched themselves to the best defensive efficiency in the NBA. They're in pretty good position to compete in an extremely weak Eastern Conference. And they have flexibility going forward to try and lure Atlanta native Dwight Howard back to the ATL over the summer. And who do they have to thank for this? None other than the Cavaliers' former general manager, Danny Ferry. I love what he's done with the place and really like the direction of the team. Horford is an all-star big man and Josh Smith has super star talent (he probably just needs to find that perfect coach to get it out of him). Ferry basically took the exact opposite approach as he took in Cleveland. Instead of inking non-stars to big contracts, he ditched all of Atlanta's bad deals and gave the team flexibility. Of course, there isn't overwhelming pressure to win now in Atlanta like there was when he was in Cleveland.

As long as we don't have Kyrie Irving on the court, the keys to victory are going to be the same. They simply need to play hard, defend, make shots, and get a little lucky. That's all. Sounds easy, right?

Dion Waiters will hopefully not settle for jumpers and instead will attack the basket. Smoove is a great shot blocker and we know that Waiters has had trouble finishing at the rim. Keep an eye on that.

The bench will need to continue to step up and Anderson Varejao needs to dominate.

Byron Scott has had two days off to work on the things that went so horribly wrong in the trainwreck against Phoenix, so hopefully that will be apparent when they take the court tonight.

Kevin Jones is still with the Canton Charge and will not be available tonight. Kyle Korver is out for the Hawks and Devin Harris will start in his place.

The Cavaliers have been highly competitive in most games. With a couple days of rest, I think the Cavs will continue that trend and push the Hawks to the brink. In the end, they fall short once again and the Hawks win, 91-87.