The Cavaliers lost a heartbreaker to the Milwaukee Bucks on Saturday night. After a hard-fought game and a ridiculous layup by Kyrie, Brandon Jennings crushed their dreams to send them to 1-2 on the season.

The Cleveland Cavaliers fell to 1-2 on this young season when the Milwaukee Bucks took them down by a final score of 105-102. Kyrie Irving had a sensational fourth quarter and tied the game with 0.7 seconds to play only to see Brandon Jennings hit the game winning three at the buzzer. I has sad.

Get your Bucks analysis over at Brew Hoop

What the heck happened?

If you have watched the first three games of the Cavaliers season thus far, you know one thing for sure: this bench is absolute garbage. I don't really feel the need to write about how awesome Kyrie Irving is (I'll do it plenty this year, trust me) or about how relentless Anderson Varejao is going after boards. The bench, on the other hand, deserves to be torched.

Take a gander at this box score. (click to enlarge)

Now, single game plus-minus is a horribly flawed stat. It provides very little context and is often not representative of what is happening in a game at all. That said, JUST LOOK AT THOSE NUMBERS. All five starters had significant positive numbers. All five bench players were miserably negative. Luke Walton managed a negative 16 in SEVEN MINUTES. HOW IS THAT POSSIBLE?

Two things that need to be complained about -- 1) how awful the bench is playing and 2) Byron Scott's substitution choices. The first point is fairly obvious. Tyler Zeller looked better, but still wasn't particularly effective. Daniel Gibson was a non-factor and C.J. Miles was atrocious. Donald Sloan was actually almost decent, but it wasn't enough to save that entire unit. Save for Walton and Sloan, I think we all had some pretty high expectations for these players. Gibson ought to be able to make more shots than that and C.J. Miles shouldn't be THAT bad. I'm not going to panic about them just yet. I don't think there's anyway that Miles and Zeller continue to be this bad. The bench unit allowed Mike Dunleavy to go off for 29 points and post a plus-minus of +24. The Milwaukee bench outscored the Cleveland bench 62-15. It was ugly.

I really can't explain why Luke Walton is getting minutes. I can, however, explain why he is STILL getting minutes. Those are two different questions. Why is Walton ever in Byron Scott's rotation? I don't know. But once we accept that he is in the rotation, I can explain why he remains there, for now. Unlike most fans, Byron Scott doesn't overreact to one game. Or two games. Or three games. He trusts what he sees in practice and he gives it time to work itself out. He already decided that Walton is going to get minutes, so he won't simply stop giving him minutes based on such limited performance. Everybody calling for Samardo Samuels and Jon Leuer will likely have to wait a bit longer.

I don't really expect Byron Scott to make fundamental changes to the 10-man rotation that he's using right now. Not yet, at least. However, I do want him to make changes in his substitutions within the game. I said it many times last night: you cannot sit Kyrie Irving and Dion Waiters at the same time, for long stretches. Until C.J. Miles starts playing actual basketball, you just simply cannot do it. You don't need to sit ALL FIVE STARTERS at once. Stagger the subs, do something different. It's clear that the 5-man bench cannot compete as one whole unit. If you leave that group out there to fend for themselves for 5-8 minutes at a time, you will dig yourself an enormous hole for the starters to climb out of. I don't think the bench players are useless, but when it's all five of them out there at once, they're pretty damn useless.

We'll discuss this at a later date but: should C.J. Miles be starting, simply so Alonzo Gee can provide some relief for the second unit? Just a thought.

Finally, it's worth mentioning that Byron Scott got pretty pissed off about the clock at the end of the game. If you watch the replay of Brandon Jennings' game winning three, it's obvious that the clock started late. Now, I can't tell if it would have made a difference. 0.7 seconds is typically plenty of time for a catch and shoot, but the video and screenshot make it clear that the clock was late to start. Jennings caught, turned, and jumped with the ball -- all without any time coming off the clock. Personally, I think he probably still gets it off in time. And the Cavaliers could have easily won this game if they didn't missed 11 free throws or if they had even pretended to guard Mike Dunleavy or not let Brandon Jennings get a straight on look to win the game. But Byron Scott was pissed and he has a point -- the clock started late. 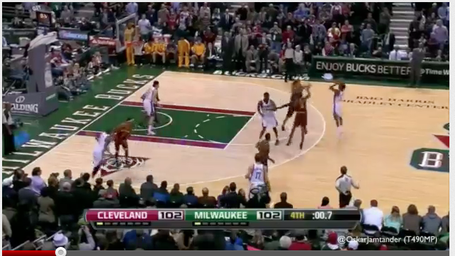 He was spectacular once again. He split the defense and attacked the rim at will. His wide array of offensive moves make him damn near impossible to defend. He dropped a cool 27 points to go along with 7 assists, 4 rebounds, and 2 steals. Anderson Varejao also had 20 points and 17 rebounds, so he's a good option too.