The Cleveland Cavaliers notched a surprising win against the Los Angeles Clippers on the road Monday night. In what may have been the most exciting game of the young season, the Cavs' young guns stepped up big time.

I have seen the future. That's right, I have seen the future and the future is full of Dion Waiters and Kyrie Irving. The Cleveland Cavaliers entered last night's game as big time underdogs, but the two young bloods exploded for a combined 52 points to lead the Cavs to an unexpected 108-101 victory over the Los Angeles Clippers.

I had zero expectations of winning this game. Dion Waiters and Kyrie Irving had other ideas. The two 20-year olds decided that they wanted to win this game and we just went along for the ride. And it was a damn fun ride. Dion Waiters dropped a cool 28 points (easily a career high) and Kyrie scored 24 points with 10 assists. I said this last night on Twitter but their combined age is 40. They scored 52 points. That's insane.

Kyrie Irving got off to a ridiculous start, scoring 16 points in the first quarter and then went quiet. Instead of coming out of the game and letting the bench collapse, Dion Waiters played some with the second unit and went to work. Irving struggled for much of the second half scoring the ball, but still ended with 24 points and hit an enormous dagger three at the end. On the night, Irving struggled with Deandre Jordan's length and went just 2 of 10 at the rim. That's not something Kyrie Irving typically does. I'm more and more impressed with Kyrie's handle every day. And that's scary. And this is impossible:

How does he do that? He slithers through the double team and then finds Tyler Zeller for the jam. Amazing

Speaking of Zeller, he had his first really good game as a pro. In his 24 minutes, Zeller scored 15 points on 6 of 10 shooting and grabbed 7 rebounds. Four of those rebounds were offensive. Zeller caught an inadvertent elbow from Jordan late in the game and would not return. The x-rays on his face were negative, but he may be out a couple days depending how much his eye swells. Hopefully we're not without Zeller for too long, because he showed flashes of really good play last night.

I talked to Clips Nation before the game and identified how the Cavs could win this game. I don't mean to brag, but I totally nailed it. Offensive rebounds and heavy doses of Kyrie would give Cleveland a decent shot at the upset. Well, that's exactly what we got. The Cavs snagged 18 offensive boards compared to the Clippers' 9 o-boards. Anderson Varejao continued his ridiculous play on both ends of floor, grabbing 15 rebounds to go along with 15 points. His midrange jumper has gotten really good and teams probably need to stop leaving him open off the pick and pop. Tristan Thompson added 8 boards (four offensive), but otherwise had a pretty rough game. He went 0 for 6 from the field and just 1 of 4 from the free throw line. Thompson did, however, have three steals and played solid defense on Blake Griffin for much of the game.

We finally got some production from C.J. Miles off the bench. Mas Fresco contributed 10 points and a couple of steals in his 14 minutes of playing time. That's what we need to see from him.

Byron Scott continues to sing the praises of Alonzo Gee's defensive efforts. His overwhelming confidence in Gee showed again when he gave him the task of guarding Chris Paul for much of the game. Having already coached Paul, I assume Byron knew something about CP3's weaknesses. Putting the bigger Gee on Paul seemed to slow him down just enough for the Cavs to have a chance to win. Paul still scored 17 points and had 9 assists, but he never really took over the game like we know he's capable of.

All in all, there's plenty of reason to be excited about the Cavaliers going forward and this game was a preview of that. You should definitely read Kevin Arnovitz's article about the young backcourt in Cleveland. He recognizes what I've been saying about two ball handlers being a huge advantage.

Fear The Sword's Player of the Game

Dion hit 7 of his 11 three pointers. That's somewhat ridiculous. He's not a great shooter, but he's a pretty good one. Last night, he was in a zone and just kept shooting and kept making them. He made some good decisions driving to the rim when he needed to and made a great pass off a pick and pop to hit Varejao. DW craves those big moments and definitely comes alive when the game is on the line. In short, he gets buckets. 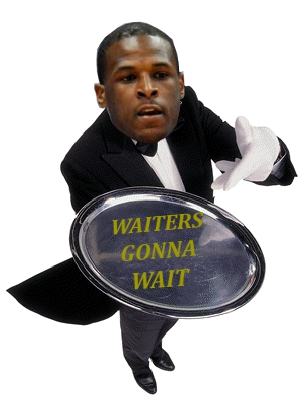