Jeremy Pargo's Emergence as an NBA Player for the Cleveland Cavaliers

Jeremy Pargo has been a surprising success since being inserted into the starting lineup due to Kyrie Irving’s injury. How has he succeeded, and what improvements has he made most in his game?

Share All sharing options for: Jeremy Pargo's Emergence as an NBA Player for the Cleveland Cavaliers

Last season, one could make the argument that Jeremy Pargo was the worst point guard in the NBA. For the Memphis Grizzlies, he shot 33 percent from the field, including 26 percent from three-point range, to finish with a true-shooting percentage of .389. What's worse, he also had a turnover rate that hovered around 18 and a 1.3:1 assist-to-turnover ratio, meaning that along with being a bad shooter he was an extremely ineffective distributor and initiator of the offense.

It seemed to be much of the same for Pargo throughout the preseason for his new team. He seemed to be pressing, which led to an identical result for him as he was turnover-prone and an inefficient shooter. Some were even wondering if he was going to make the team coming out of camp. Obviously, Coach Byron Scott opted to keep three point guards to the chagrin of some, but since then it has worked out swimmingly for the Cavaliers.

Pargo has surprisingly been a quite effective point guard since entering the lineup due to the Kyrie Irving injury. He was a revelation in his first start for the Cavs, scoring 28 points with five rebounds and four assists in leading the Cavs to victory against the 76ers. Since he's been starting, he has settled in at 14.5 points and 4.4 assists while shooting 35 percent from three point range with a PER of 13.0, which are staggering improvements across the board for a player who was among the worst at his position last season. He's shown to be a streaky spark plug that can carry the offense for stretches (along with sometimes disintegrate the offense with a wild drive).

So where has Pargo made his improvements? They have come in two ways specifically.

1. Driving with a purpose, leading to fewer turnovers

Pargo has made a concerted effort to turn the ball over less this season. His turnover rate has gone from 17.5 down to 12.4 this season even though his usage rate has gone up from 21.4 to 23.8. The biggest thing I've noticed is that he is more purposeful with his drives into the lane. He uses screens to get mismatches against the defense as opposed to using them to get into the lane with his head down. Also with the increased playing time, it seems he has gained confidence to play within himself, which has led to better decision-making. While he does still make bad decisions from time-to-time, his decisions have been better. Here is an example of a play from last year that shows his lack of purpose when driving, followed by an example of his improvement in this regard. 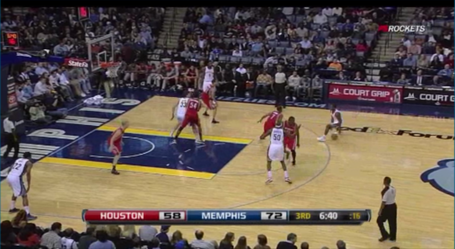 So here we see Pargo with the ball playing for Memphis. Zach Randolph has set a screen earlier in the play to get Pargo a little space at the three-point line. 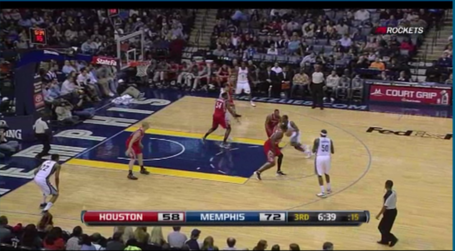 Pargo starts his drive. It looks like he's about to have his shoulders even with the defender, which means he's got him beat. Also, look at how much Rudy Gay's defender, Chase Budinger, is already cheating to help on the drive. With one foot in the lane, it is going to be difficult for him to get back to Gay, who is an adept three-point shooter. Pargo should be looking to draw Budinger to him here in order to kick it out to Gay. 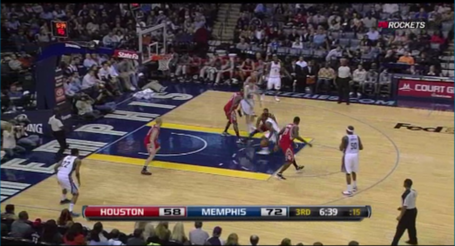 Just one step later, Pargo beaten his man and Budinger is now facing the bucket with his momentum going towards Pargo. Again this should be a simple pass out to Gay for an open three. 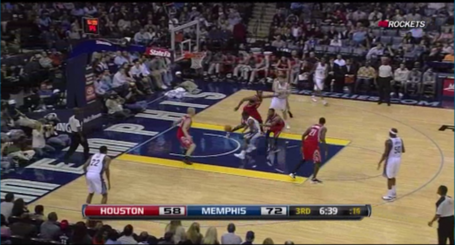 Pargo is now square with the hoop. The problem is though that no one, not even Jeremy, knows what he's going to do. He still hasn't taken a look at the wide-open Gay in the corner. As he gathers, he loses the ball out of bounds to turn the ball over. As we've seen with the Cavs this year, Pargo does have tremendous quickness that allows him to get into the lane. Unlike last year though, this year he drives with a purpose. Here is a strong example of what he does with the ball now. 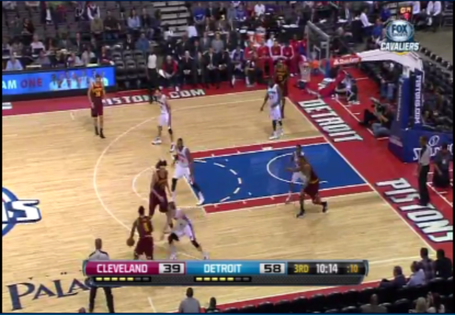 This is from the first Cavs-Pistons game this season. Here, we see Andy come up to set a screen for Pargo, who is going to use the screen to get around defender Kyle Singler (a sneaky quick and long defender) and get into the lane. 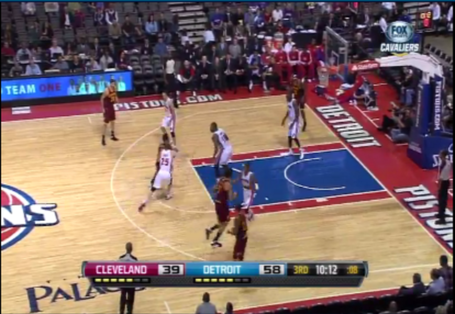 Pargo must now decide whether he's going to attempt to split the defender trying to catch up off the screen (Singler) and the help defender (Greg Monroe), or attempt to simply draw Monroe towards him in an effort to get Varejao an easy bucket. This should be an easy decision to attempt to draw Monroe toward him, as that would lead to an mismatched right side of the floor, with only Brandon Knight left to guard one of Gee at the three point line or Andy at the basket. However, we just saw an example of his poor decision-making from last year. Let's see what Pargo does this year. 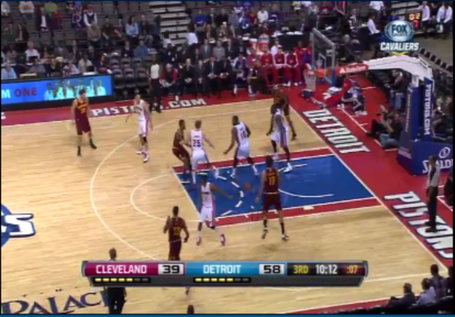 Pargo decides to make a few purposeful horizontal dribbles, which brings Monroe over to him. Knight has decided to guard Gee at the three-point line (probably a wise decision even though Varejao is right at the bucket, as Varejao's height makes him a prohibitive favorite in a lob situation as it is), leaving Varejao wide open on the overloaded side of the court. Pargo wisely makes the bounce pass to Varejao, who gets the easy bucket. Here, by not recklessly attacking the bucket with the horizontal dribbles, he was able to force Monroe over and create an open player, as opposed to only working to get himself open. This play leads directly into our second situation that Pargo has shown improvement in.

2. An improved ability in pick-and-roll situations

With the point guard being a pick-and-roll-driven position in today's NBA, an improvement here was essential to Pargo's success. According to Synergy, Pargo has gone from .7 PPP in pick-and-roll situations to .83 PPP, which puts him at 30th in the NBA. His shooting in this situation has gone up from 40.4 percent to 45.7 percent. Along with that, as we saw in the play discussed earlier, he has built quite a rapport with Anderson Varejao in this situation. Nearly 31 percent of Pargo's assists this year have been to Varejao, with most of them coming in pick-and-roll situations with Varejao rolling to the hoop. This connection with Varejao in the pick-and-roll situation has been a major aspect of why he's been able to hold off Donald Sloan recently for the starting PG job with Kyrie out (Sloan still hasn't assisted on a Varejao bucket this season despite playing nearly 70 minutes with him).

Pargo's revelatory play this season hasn't been without its issues though. Coach Scott acknowledged that even though Jeremy has been a good performer in Kyrie's absence, he still has to stop making bad decisions:

"Jeremy is taking some shots that are ill-advised and we've talked to him about it and we've shown him the tape," Scott said. "He has to do a better job of making decisions, but combined, I thought those guys played pretty well."

His inconsistency recently has led to some speculation as to whether or not he's going to keep the temporary starting point guard job, but with his outburst Saturday night against the Pistons it looks like it is again his job to run with. His continued capacity to play within himself and make the right decision will be essential to his success. Also, let's keep in mind that despite being 26, he has only played 58 career NBA games. It takes a little bit of time and experience to become a PG in this league, age be damned. Not everyone steps in like Damian Lillard has and is able to seemingly make the right decision with every move he makes. While not every PG learns, turnovers fall and better shots rise the more an inexperienced PG plays. Hopefully Pargo will continue to get better in this regard the more he plays.

While he has been arguably (along with Alonzo Gee) the second best player on the Cavs while Dion Waiters and Irving are out, Pargo probably profiles best as a spark-plug backup PG in this league because of his streaky scoring ability. He does not provide the normal steadying hand of a backup PG, but he does provide the offensive outbursts that are necessary from a second unit. But this season he has at least proven to be an NBA player, which is something that was in doubt as recently as this preseason. The Cavs do have the ability to retain Pargo's rights this offseason by extending a $1.25 million qualifying offer, so if he continues to impress and progress as a player, he might be a decent option as a backup PG for the Cavaliers moving forward.