Analyzing Tyler Zeller and the Changes in His Offensive Game

While watching the Raptors-Cavs game Tuesday night, I started to notice some troubling trends and habits that Tyler Zeller is developing on offense.

Share All sharing options for: Analyzing Tyler Zeller and the Changes in His Offensive Game

(all stats taken from basketball-reference.com unless noted otherwise)

Since turning pro, Tyler Zeller has pretty much entirely changed his offensive game. He's been relegated to becoming a jump shooter so far during his Cavaliers' tenure. This is something I was curious about, as I remembered Zeller as an adequate jump shooter in college, but more of a post presence. Jonathan Givony's (of DraftExpress.com) scouting report of Zeller from last year seemed to echo that:

In the half-court, Zeller does much of his damage in the post, where he looked to be more assertive and confident as a senior, fighting to establish position and calling for the ball. His bread and butter is still his right-handed jump hook turning to his left shoulder, which he executes effectively from either block and can even shoot from a bit further out, depending on how deep he catches the ball.

After watching some highlights and games, I saw that Zeller had a pretty refined post game in college. He was able to show solid (if unspectacular) footwork and a knowledge of how to get space to get his shot off in college. Here is an example of something Givony was talking about as far as a right-handed hook shot over his left shoulder:

Here, Zeller receives the ball on the left block against Mike Scott (now playing for the Atlanta Hawks).

Zeller takes a few purposeful dribbles to the left in order to try to get a better angle at the hoop to take a better post shot. Notice that Zeller is actually a little bit further from the hoop now than he was, meaning Scott is doing a pretty good job of pushing him away from the hoop in order to make the shot more difficult. This is also something Zeller has to deal with in the NBA, as most defenders are stronger than him. However, in the next shot Zeller shows how he's able to create space despite the strength disadvantage.

Zeller now tries to create some space by bending and using his butt to push the defender a bit further back. This is something that is essential for Zeller, as even though he is 7'0" his wingspan is very average for a big man. These few inches of space are vital for Zeller, as they will allow him to proceed into his next maneuver.

Zeller goes straight from the crouch (difficult to see via picture, but there is no wasted movement from the crouch to going up for the hook) to leaping straight up for a right-handed hook shot. Notice here how that little bit of space he got by forcing his butt into Scott (who is leaping from exactly where he was standing in the previous shot) gave him the space to go up for the hook. With the left shoulder guarding the ball and the full extension that Zeller gets as a seven-footer, this shot is nearly unblockable. Zeller has taken this hook shot while posting up twice in his first 22 games with the Cavs (neither time from the left block). His lack of strength was even evident here, but he still managed to get a highly effective shot off despite it against an NBA-level talent. This is something Zeller needs to do more of in Cleveland, especially with the dearth of post-up options the Cavs have right now.

So far this season, Zeller has taken 54 jump shots from 10-23 feet away as opposed to only 53 shots at the rim. In fact, Zeller has more than tripled the amount of jump shots he's taken per game from a little bit below one per game (according to DraftExpress.com) last season at UNC to 3.13 per game this season despite receiving six less minutes per game this season for the Cavs than he was at UNC last year. Because of that, he is the owner of a .467 effective shooting percentage, which is good for 64th out of 95 qualified forwards or centers 6'9" or taller. Why has this happened? And why has his efficiency been sapped? I think it is a two-fold problem.

1. Zeller's unwillingness to mix it up in the post.

The most troubling trend I've seen offensively from Zeller is his reluctance to create contact in the post. Zeller, especially over the last few games, has started to float around the perimeter in order to take more jumpers. Here is an example from Tuesday's Raptors-Cavs game: 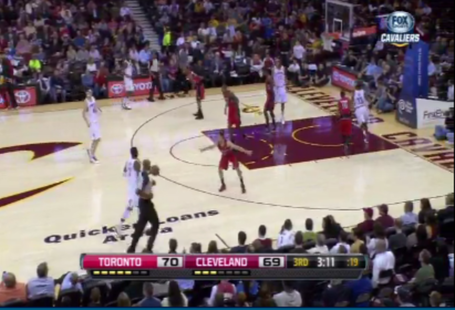 Zeller is coming down the floor with Kyrie Irving. I'm assuming he'll probably try to set a pick at some point in order to free up Kyrie or someone else. 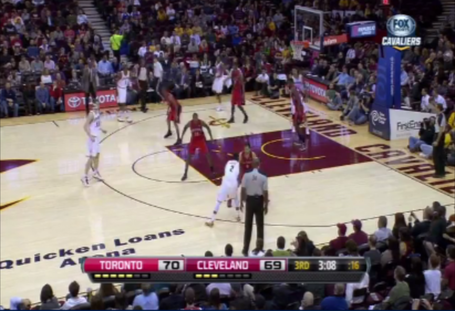 Still waiting. Maybe he'll go set a screen for Dion Waiters or something. Or maybe he'll just follow Kyrie into the paint after he gets by Calderon in order to clean up on the offensive rebound (something he's been very effective at this year, averaging 3.2 offensive rebounds per 36 minutes). To be fair, with how he's standing on the edge of the three-point line, maybe he's just nervous that all of the area inside of the three-point line is molten hot magma and he'll burn his foot off by stepping inside of it. 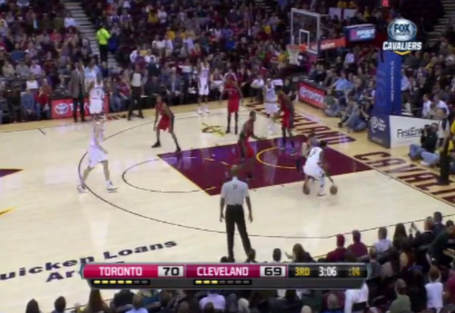 Oh look, a couple of seconds later and Zeller has decided to join the play and step in front of the three-point line. Looks like he made his decision that the area inside the three-point line was safe to venture into. Good. Maybe he'll step into that 15 foot range where he's comfortable instead of the 20 foot range where I'm not sure I ever saw him take a collegiate shot. With his defender going down to help on Kyrie, the 15-foot range should be open for him here. 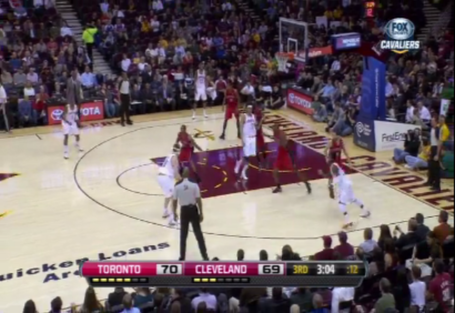 Nahh, I think he'll just settle into that 20-foot range and take a jumper, despite no one being within 15 feet of Dion if he makes the smart pass around the horn here. Unfortunately, Zeller has never been a particularly strong passer even in college (only 7% of his used possessions his senior year generated an assist according to DraftExpress.com), but it still would seem that a three-pointer by Dion would be the more effective and efficient shot than a 20-footer by Zeller. And it's an easy pass to make there. However, Zeller seems to be set into taking that long jump shot, which he missed, leading to a rebound out to DeRozan who starts a fast-break and gets fouled by Kyrie to go to the line, where he made two free-throws. I'm not sure if it's a confidence thing or what with him, but most of the time he doesn't even attempt to establish post position in any way. Last night I actually noticed a situation where he had it if he wanted to establish it, then vacated the area to go back to the perimeter. This is an entirely different Tyler Zeller than the one that played for North Carolina last year. That one fought for his post position in order to get shots closer to the bucket.

So far this year, Zeller has posted up and taken six shots in 22 games. In fact, post possessions have only made up five percent of his offensive possessions (put it this way, it's such a low percentage of his output I have to write out the words "five percent"). Last season, he posted up on just over 42% of his possessions according to DraftExpress.com. This is a staggering difference in his playing style. Not only is he more efficient scoring closer to the bucket, but also this directly leads into another problem that he's faced since he hasn't been going into the post.

His lack of desire to mix it up in the paint has hurt him in his ability to draw fouls. Zeller drew fouls at an extremely impressive rate in college (in fact, his 8.4 free throw attempts per 40 minutes were the highest total in the ACC last season). At the free throw line, Zeller also knocked down about 81% of his free throws, meaning not only did he get to the line a lot, but also he took advantage when he was there. However, this season he is taking under two free throws per game, meaning some of what made him such an efficient college player has been rendered moot because of his lack of desire to go into the paint.

2. The Cavaliers' inefficiency in transition

Zeller was the best big man in the draft at running the floor and finishing in transition. Period. He's a gazelle in the open floor. He's able to run past guards even to get down the floor if his guards get it to him. However, to this point he hasn't been unleashed in the open floor. This may partially have to do with the Cavs' inefficiency and inability to run the floor. According to Synergy, the Cavs have only gotten out in transition on 12% of their possessions this season, which is tied for 20thin the NBA. And on those transition plays, the Cavs only average 1.04 points per possession, which is 27th in the NBA, which means not only are they getting out in transition infrequently, but also they are not efficient when they do so. This has bitten Zeller as well. While his 1.07 points per possession in transition are above the team's average, they are still below average for the league. Also, he is actually getting out in transition less than the rest of the team at only 8.3% of his possessions (in college, he they made up 10% of his possessions).

Last night's 20-point effort was an encouraging sign for Zeller, however these problems still persisted. Zeller scored 10 of his points from 16-23 feet, 4 off of offensive rebounds, 4 near the hoop on rolls or cuts to the bucket, and 2 on free throws. Notice that, again, zero of his points came in post-up or in transition situations, which throughout his career have been his best attributes. There is a chance that both of these things mentioned above are systemic things that Byron Scott is doing as opposed to what Zeller is doing, especially as far as the transition play is concerned. Coach Scott seemed to have an emphasis on rebounding well in the preseason and in the early going of the regular season, meaning that Zeller simply might be forced to stay in the paint and rebound as opposed to getting out and running more.

However, while Scott may not see much of a post player in Zeller (This is entirely possible. Maybe Scott is telling him to stay out of the post), I do find it hard to believe that he is totally responsible for the complete lack of post play that we've seen from Zeller thus far. Post play is where Zeller was at his most effective in the half-court setting in college. He needs to get back to doing that if he is to reach his full professional potential with the Cavs. Zeller has the ability to score in the post, even despite the strength that he needs to add to be more effective defensively. He needs to regain the confidence to at least make the attempt to establish position in the post in order to become a better player.

Zeller was always a hard worker in college and I don't think I ever saw him float around the perimeter for a jumper in his four years there. If he stops floating, and starts to get into the post more along with the Cavs starting to get out to run more, I think we'll see a better, more efficient scorer at the pro level.