Why Shaun Livingston Makes Sense for the Cleveland Cavaliers

Shaun Livingston was just signed by the Cavaliers on Christmas Day. Why does he make sense for the Cavs?

Share All sharing options for: Why Shaun Livingston Makes Sense for the Cleveland Cavaliers

So, if you follow me on Twitter you've probably noticed my love for Shaun Livingston. You're probably wondering why I so badly wanted the Cavaliers to sign a guy that has been cut twice since October 29.

Well part of it is simply a personal thing: I really want Shaun Livingston to succeed. Livingston was committed to Duke University prior to turning to turning professional straight out of high school in 2004, and as a Duke basketball fan I've always considered him part of the family. Why I not only never felt ill will towards him for not playing at Duke, but also embraced him as an NBA player immediately, I'm not entirely sure. It probably had to do with the fact that he was just so damn fun to watch play early on in his career.

Livingston was simply electric with the ball in his hands while playing for the Clippers early in his career. He was lightning fast for a 6'7" player, and just saw the floor differently than others did because of his height and passing acumen. He wasn't the best player yet (hell, with PERs of 10.4, 10.2, and 13.7 it's pretty evident he wasn't even an above average player), but he was clearly starting to turn the corner when "it" happened.

"It" refers to the most gruesome, debilitating knee injury I've ever seen. While driving for a layup on a fast break, (and I'm doing this off of a 5 year old memory because I don't want to watch it again), he went up for a layup and came down on his knee. Yes, I mean he tried to land on his foot, and came down on his knee. Livingston dislocated his kneecap on top of tearing his ACL, PCL and lateral meniscus. This was an injury I honestly never expected him to come back from.

It took a full three years for Livingston to return to being an NBA contributor, which occurred for Washington back in 2010. Since then, he has bounced from Washington, to Charlotte, to Milwaukee, to Houston, back to Washington, and now to Cleveland. Livingston went from being a sure-thing, point-guard of the future to a journeyman NBA point guard in a flash, and it really sucks.

Meaning your second question probably is: what can Shaun Livingston bring to the Cavaliers if he's just a 27-year-old journeyman?

Well, Livingston is an entirely different player than he was early in his career. He has gone from being a flashy point-guard who fed off getting out in transition to becoming something more of a combo-guard. Livingston is still a very capable ball-handler, but he's transformed himself into a smart scorer by using his size and smarts. He now has a pretty solid post game that comprises about 15% of his offensive output. But having him on this roster makes sense first and foremost because of his intelligence when cutting to the hoop.

According to Synergy, last season Livingston shot 26-31 (!!!!) off of cuts, two-thirds of which were dunks or layups. He was the best player in their entire database last year on offense off of cuts. This makes him perfect fit for Byron Scott's Princeton offense, which relies on guys who can make smart, decisive cuts to the basket in order to get easy scores. Livingston should be able to make a living for the Cavs on offense off of backdoor cuts to the hoop where he can get those easy layups and dunks. While not exactly a Princeton set, here's an example of something that the Bucks did last year that is quite similar to what the Cavs do this year: 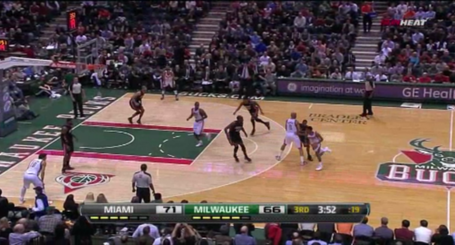 Here, the play starts with a high screen by Drew Gooden for Brandon Jennings. Livingston is the corner at the top of your picture.The high screen is something that we see employed pretty often by the Cavaliers with Anderson Varejao as the screener and Kyrie Irving as the ball handler. 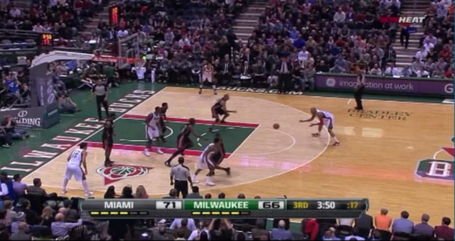 The Heat defense has collapsed towards Jennings who has now passed the ball to Gooden. Livingston is still sitting the corner. This is because he wants Battier (the only guy on the right side of the floor for Miami) to flash up to Gooden. If he starts his cut too early, Battier will slide down to him, and allow Anthony to either attempt to contest a 20 footer from Gooden (which is a very beneficial for the Heat because Drew Gooden is Drew Gooden), or be able to simply step up and guard him once he receives the ball. 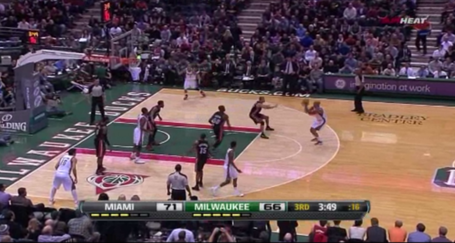 Gooden has flashed the jumper here, pretending he's going to shoot. Since Livingston stayed in the corner that extra split second, Battier has rotated up to the elbow now in order to contest Gooden's shot (not the best moment for an intelligent defender like Battier) instead of rotating to the left and letting Anthony, who is right next to him now, try to contest it. Livingston has started his cut now and there is no one in front of him and the hoop. 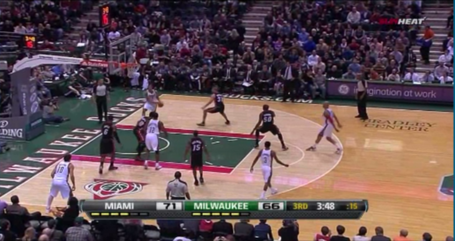 Livingston has now caught the pass where he gets an easy layup as Battier is caught in no man's land on defense. Knowing when to smartly make a cut is one of the most important things in the Princeton sets that Scott employs. This scenario is easily imaginable with Cavaliers, as Varejao is a much better passer than Gooden and the Cavs have guys in Irving and Dion Waiters that can force a defense to rotate over like Miami did in the first picture. Livingston's backdoor cutting ability will be something the Cavs find useful throughout the season.

The next question is where does Livingston fit on defense. That is the place I most thought that Livingston would be a perfect fit. Livingston now allows the undersized Daniel Gibson to slide over to defend point guards instead of being forced to defend guys 5 inches taller than he is. Gibson is a fine defender that simply just isn't big enough to guard shooting guards when the Cavs went small with both he and one of Jeremy Pargo or Donald Sloan in the back court. Livingston is not the best defender (the knee injury did sap some of his quickness and movement) but with his length he's at least able to close out on shooters more effectively than Gibson can. Livingston has also been one of the better isolation defenders in the NBA since returning from his knee injury (this can probably be attributed to his length as he also has a near 7'0" wingspan), where until this season he has always posted above-average points-per-possession marks according to Synergy.

After watching a lot of his possessions this year, the place where Livingston struggles most defensively is fighting through screens. He seems to get either caught up in the screen and unable to recover, or he goes under the screen (in order to make up for his sapped quickness) and isn't quick enough to contest the pull-up jumper off of the screen. That may be the biggest problem for Livingston, but if the Cavs keep him as an off-ball defender, that may be mitigated as he won't have to fight through as many on-ball screens.

Okay, so signing Shaun Livingston yesterday is not necessarily a Christmas miracle. He's still a 27-year-old journeyman point guard at this point in his career. I miss that 6'7", 175 pound kid that was able to make behind the back passes in transition. I would be excited if he's able to give the Cavaliers a solid 15 minutes a night off the bench, which is a sad indictment of where his career ended up because of the injury. But he does seem to be a guy that can pay dividends for the Cavs if they utilize him properly. Livingston is a smart player that I wish nothing but the best in the future, and hopefully he has finally found a place he can call home in Cleveland.