Share All sharing options for: Contest To Win Cavaliers Tickets From TiqIQ

Alright guys, here's the deal. SBNation has a partnership with TiqIQ, a site that puts together some great deals for tickets. They put together deals from ebay, Stubhub, etc. If you haven't noticed, there's a "tickets" tab across the top of the FearTheSword homepage.

If you haven't noticed this tab before, make sure you check it out. It'll definitely give you guys the chance to go to the Q and see Kyrie Irving and company in person. Here's the link if you're too lazy to find the tab.

Okay, so now here's the good part: we're giving away some tickets. The Boston Celtics come to town for February 28th and FearTheSword and TiqIq are teaming up to give away two tickets to that game. All you've gotta do to win is go to the TiqIQ facebook page, write "FearTheSword" and then write who your all-time favorite Cavalier is and why. The guys at TiqIQ will pick a winner once the contest ends, contact you, and send you on your merry way to watch the Cavs sink the Celtics again.

"FearTheSword: Ryan Hollins, because he is easily the best center of all time and dominated great players such as Semih Erden and Samardo Samuels during a Cavaliers scrimmage."

(Don't write that, you'll probably lose. Just write who your favorite Cavalier is and why, it's not that hard.)

There are some other solid deals that TiqIQ is offering for Cavaliers home games in February.

One game is 2/21 vs. the Pistons. The average ticket price for that game is $75 but via TiqIQ's "make an offer" feature, you can get really nice seats for $60. Check it out here.

The last game is the next night, 2/22 against the Hornets. The average ticket price for that game is $84, but you can get pretty awesome seats for $60. Check it out here.

I strongly encourage you guys to at least check out these deals and definitely enter the contest to win the Cavaliers-Celtics tickets. 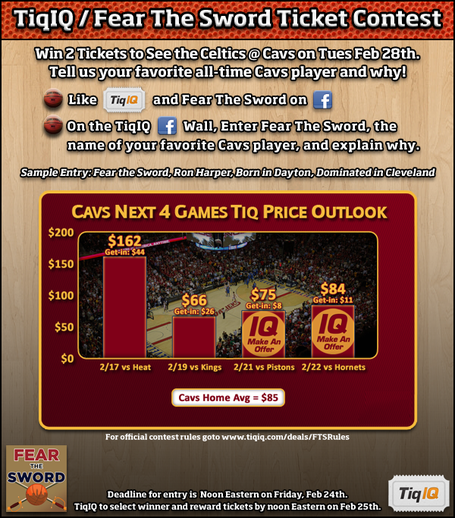