I don't know about you, but I'm really excited about playing the Memphis Grizzlies the night after playing the San Antonio Spurs. Another really deep, really good team that will likely stomp the Cavaliers into oblivion. Fun fun fun.

You know who else loves Memphis? Chris Broussard. So much so that he decided to freestyle the spelling. He and Memphis are super tight. Only Memphis' closest friends know the super-duper secret nickname "Mempis". 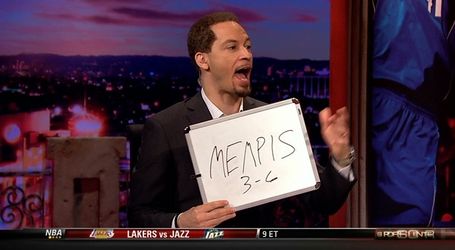 Song of the Day: Pretty Fly (For A White Guy) - The Offspring

Lucky us, this game starts at 8 PM Eastern! You know what that means? Yeah, you do (it means nothing).

We know that the Grizzlies are a really solid team and right now they will mostly likely face off against the Los Angeles Clippers in the first round of the playoffs. We also know that the Cavaliers are not a good team and are duking it out with the Sacramento Kings, New Orleans Hornets, and Toronto Raptors for draft lottery positioning. What we don't know is what the heck Tony Allen is ever trying to say on Twitter. Let's try to figure it out.

Here's one of Allen's tweets, we'll start off simple.

Now, these next tweets are from last night.

First he says good night to the world. That's a relatively normal thing to do. I won't criticize him for that. Although I do wonder about the lack of exclamation points. He's not nearly as excited about saying good night as he was about golf n games. Maybe he's just tired.

A few minutes after he says good night world, he laughs at it. Allow yourself to wonder what exactly he's laughing about, because I have no idea. Just laughing for the sake of laughing -- a jolly fellow.

Just a couple minutes later, Tony decides to get out of bed and tweet about the game going on between the Hornets and Clippers. I'm assuming that he's saying "2 thumbs down 2 the hornets" because a Clippers loss would have helped the Grizzlies get home court advantage in the playoffs. Some other interesting things about this tweet: first, he feels the need to explain himself. He doesn't want anybody to get mad at him for tweeting after he already said goodnight. It's courteous, albeit a bit unnecessary. Second, his grasp of punctuation is questionable at best. Are apostrophes and commas interchangeable? Why would you put a comma there anyway? Why would you use the number 2 to represent both the actual number and the word "to" in the same sentence? Isn't that confusing? So many questions.

Here we see Tony Allen weighing in on the situation in Orlando involving Stan Van Gundy and Dwight Howard. Once again, his use of punctuation is intriguing. Why the random periods in the middle of sentences but not at the end of the sentence? It would appear that Tony thinks Dwight indeed asked for Stan to be fired.

If you follow Tony Allen, you'll know that he uses a crap load of exclamation points. Well, used to use them. This tweet is his official announcement that he is switching from exclamation points to quotation marks. For whatever reason, he felt the need to mix it up.

Yeah. There's lots of """" and !!!! in this tweet. Also, a really deep message. You can't make everybody happy. I assume he's referring to the people that like exclamation points versus quotation marks. Or something.