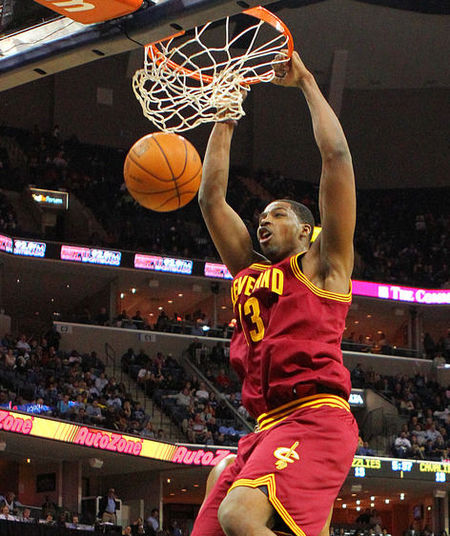 I was at a West Toledo bar playing shuffleboard with my friends the night the Cleveland Cavaliers began to turn the page from LeBron James by selecting Kyrie Irving and Tristan Thompson. I was already relieved that the Cavaliers were apparently going to select Mr. Irving. After watching him dismantle the Michigan State Spartans in a November game as part of the Big Ten/ACC challenge, I was on board. But there were some who wanted to take Derrick Williams, and either Kemba Walker or Brandon Knight. Chris Grant didn't go down that road, and he deserves a lot of commendation. So in analyzing how we used the fourth pick, I am going to assume that Kemba and Brandon were not the right picks. I was hoping for Enes Kanter, but he went off the board at 3. When the Cavaliers took Mr. Thompson, however, I was deeply disappointed. My friends, who follow the Cavaliers really only as far as I do, asked me who he was, what he was good at. I had no idea.

We are familiar with the things that were immediately said about Mr. Thompson, and it seems like most of the scouts were right on. Tristan is very athletic, very raw, and works hard, especially on the offensive end rebounding. And the free throws. Oh, did we hear about the free throws. He had his first full season, and I think now it is fair to start analyzing Chris Grant's choice. We won't be able to come to any hard and fast conclusions just yet. I don't believe we will really know until 2014. But we all know that in the NBA, for a small-market team, the window to succeed is small, and the draft is the lifeblood of a rebuilding team.

First, a few things that should be taken into account when judging Tristan against his 2011 draft peers. No serious fan, and certainly not Chris Grant, looked at Thompson with the idea that he would be an immediate difference maker that would show why he was worthy of a top 5 pick. He was a project. The Cavaliers, with Byron Scott, are a disciplined team that focuses on defense and smart play. As good as Tristan's motor is, he simply wasn't going to be able to play the type of basketball Coach Scott wanted right away. And this was part of the allure of Grant bringing him to Cleveland in the first place. A strong, disciplined environment, where winning wasn't seen as immediately necessary, and he could be brought along slowly, was always the plan for Tristan.

Next, the lockout happened. There was no summer league, there was a shortened training camp, and for a long time Coach Scott wasn't even allowed to contact Thompson. Thompson clearly worked out, and worked to improve, and it isn't exactly a secret the areas in which he needed to get better, but without the Cavaliers staff working with him consistently, it was a wasted summer and fall.

There was a factor this season this really helped Tristan, though. Imagine Kyrie Irving never came to Cleveland. The Cavaliers still had Mo Williams, and the Clippers trade never happened. Tristan is made the 4th pick of the draft and all eyes are on the rookie out of Texas as the great hope to lead the Cavaliers back to respectability. The media focus might have been hurtful. As a project, it was really helpful for the Cavaliers to have the pressure off of Thompson, and on the shoulders of Kyrie Irving, who handled all the pressure in a way that was simply amazing for a 19 year old.

I will analyze three issues; how did Tristan Thompson fare, how does this compare to players drafted after him, and what does this mean going forward?

How did Tristan Thompson play this year?

What we actually saw: The motor is certainly there. He actually seemed to be blocking more shots early on in the year, when he knew less about his positioning on the floor, and where he was actually supposed to be. Understandably, when he played on instincts, his athleticism allowed him to fly all over the floor contesting shots, grabbing offensive rebounds, and trying to make an impact on the game. But this won't make him an effective player on a contending basketball team, and he seems to understand this. The coaching staff is certainly doing everything they can to get it in his head. While trying to play the game with his head is a key part of his growth, especially if he is going to fulfill his potential as an all-world defender, it led to some growing pains. Early on in the season you might see two or three blocks that made you say wow, but you also watched blown assignments and guards get through the lane without any help coming. Some of this was Antawn Jamison, Semih Erden, and Ryan Hollins, no doubt about it. And Kyrie, Ramon Sessions, and Anthony Parker weren't exactly defensive stars on the perimeter. Ultimately, he has all the tools to put his game together and be a great shot blocker and contester, while playing excellent on ball defense, and giving help to his teammates when they get beat off the dribble.

Offensively, he was just as raw as advertised. There is no post up game to speak of. He has a baby hook with decent touch on it, but has no clue how to get himself in position to use it. He travels when he does get the ball with his back to the basket (though his turnover rate isn't terrible, all things considered), and if a stronger Power Forward is on him, he can get bullied a bit and shoot falling away from the basket. This would be bad for a good shooter, and Tristan Thompson is not a good shooter. Eventually his athleticism should allow him to spin off stronger post players and attack the basket, but this isn't a part of his game at the moment.

He seems to be most comfortable facing up opposing post players, and early in the season surprised some of us by having a strong first step and decent touch. Due to his relative speed, he should also be successful cutting towards the basket. Unfortunately, he is just not comfortable yet and his hands are a liability. When the Cavs went to him on cutting plays, he averaged .89 points per possession, which was in the bottom 11% of all NBA players.

In Sebastian Pruiti's final rookie rankings for the season, Tristan didn't crack the top 10. In David Thorpe's rankings, he finished right at 10. His Player Efficiency rating ranked 18 among rookies. But these rankings don't happen in a vaccuum. The Cavs didn't need Tristan Thompson to be the second best rookie in basketball this year. They need him to be the second best player in the draft in 5 years, and, in fairness to Chris Grant, it may only be right to expect him to be the fourth best player from the 2011 draft.

How did players taken behind Tristan fare?

As I struggled at shuffleboard, I was pretty certain the Cavs would select Jonas Valanciunas. The team was certainly comfortable with overseas players, as Zydrunas Ilgauskas had been a beloved member of the franchise for what seemed liked forever. There was no way to know if Jonas would come over immediately, but it seemed immaterial. The Cavaliers weren't going to win immediately anyways, and expecting a 19 year old 7 footer to contribute seemed silly anyways. If they didnt get Valanciunas, I thought Kawhi Leonard would be a good addition. Athletic, big, strong, and some scoring to go along with strong defense. I wasn't quite sure why his stock seemed to be dipping.

Jonas will ultimately be the guy that Tristan gets compared to, for better or worse. Valanciunas didn't come over from Europe, but that doesn't mean much. From the sounds of it, he is super talented and is producing in a big way for his Lithuanian team. While his numbers, 10.8 ppg and 7.6 rpg dont blow you away, the Raptors continue to fawn over the big man. Toronto coach Dwane Casey is on the record saying "At the worst, we are getting a Joakim Noah". It is impossible to really compare the fourth and fifth picks in the draft at this stage, but this doesn't make the outcome any less important.

For rookies who did play this year, there are arguments to be made that Iman Shumpert, Kenneth Faried, Marshon Brooks, Klay Thompson, Alec Burks, and Leonard could ultimately end up as better players than Tristan. With Kyrie Irving in the fold, it really doesn't seem relevant to even consider the futures of other point guards like Isaiah Thomas or Brandon Knight. Klay Thompson. Not a bad time to point out that Chris Grant could have taken Jan Vesely, which would have already been raising major red flags. And, with a different owner, there may have been pressure to take Jimmer Fredette in hopes of selling tickets.

It is fair to wonder, however, how Iman Shumpert would look with Kyrie Irving in the backcourt. Outstanding defense to mix with outstanding offense. Kawhi Leonard ended up being a better scorer than anyone could have imagined, and still has the tools to develop into a great defender as well. Playing for the Spurs, he really couldn't be in a better position to succeed. Brooks can score, but what else?

Kenneth Faried is also fair game. He was the only rookie with a higher PER than Kyrie, due mainly to outstanding rebounding. He isn't as athletic as Tristan, and is similarly limited offensively. It is easier to see Tristan improving offensively, and becoming a true defensive force. Still, if Ken Faried is already capable of being the 5th or 6th best player on a good playoff team, Tristan Thompson is definitely not. You want a bit more than that with the fourth pick in the draft.

Tristan goes to work with the aforementioned Zydrunas Ilgauskas. Full summer session in Las Vegas with Kyrie Irving and the team's 2012 draft picks. Free throws, free throws, free throws. David Thorpe towards the end of the season imagined a re-draft, knowing all the information we have now about the players. Tristan Thompson was the second pick of the draft. Thompson seems coachable, is not content to just be an athletic dunker, and seems committed to the team winning. It will be interesting to see the 2011 draft class grow; it is clearly full of better players than the experts were prepared for. Our second selection seems a lot better than it did when I was losing at shuffleboard, and that is enough.

"I want to thank Cleveland for supporting us through a tough year, we promise to keep getting better, I'll see you next season!" - Tristan Thompson. I love the attitude. Thanks for reading.