Until the NBA Draft on June 28th, I'll be giving you guys a daily blog post. I plan on giving you guys the number of days left before the incredibly exciting day and then just some scattered thoughts about the draft, Cavs, and NBA playoffs in general. Hopefully this helps kill some time before the draft and gives us all something to talk about/look forward to.

Russell Westbrook and the Oklahoma City Thunder ousted the Lakers last night in part because of this absurd and-1. The Thunder were really just an overall better than the Lakers. Kobe Bryant scored his points, but Mike Brown and company just failed to utilize their two huge advantages in Pau Gasol and Andrew Bynum. Furthermore, former Cavalier Ramon Sessions really failed to live up to expectations for the Lakers. It was a smart trade for the Lakers to make, but did he really help them get any further than they would have otherwise? Lots of the time it was Steve Blake playing during crunch time. The Lakers are a mess and the Cavaliers have the right to swap Miami's first round pick with the Lakers' first round pick in 2013. Considering how good Miami likely will be, that could be a difference of about 7 or 8 draft spots.

PS: I am DYING to have Quicken Loans absolutely ROCKING like this arena was last night. Goosebumps.

I spun the ESPN Lottery Machine once and this is what came up. I'm not so sure that the Cavs would take Andre Drummond if they end up with the fourth pick and Bradley Beal is gone. Harrison Barnes is still on the board. This situation would cause for an interesting debate and it's one that I don't have a really strong opinion on yet. I think both players will be good. It's the debate between a potentially dominant big man and the scorer that the Cavs so desperately need. 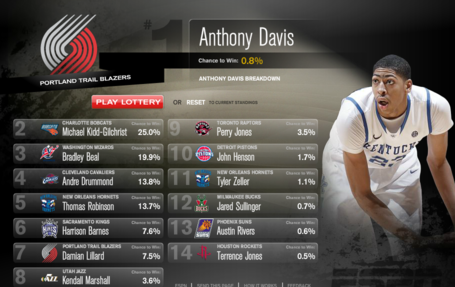 If you read one thing (other than this) today, you ought to read Kyrie Irving's interview with GQ Magazine. Once again, he comes off as really mature, humble, and honest. He doesn't want to replace any former Cavaliers players -- he just wants to be his own player. Check it out.

GQ: Who were the other tough guys to play against?
Kyrie Irving: Everybody. Everybody in the NBA is good. And then you have the really good ones and the great ones. The great ones I find myself watching, which is bad. When we were in L.A. playing the Lakers, I was watching Kobe go to work on my teammates. And then playing KD, against LeBron...the same thing. But at the same time, when I was playing out there, I felt like I belonged out there. That was the defining moment for me. When I really felt like I belonged.

The Orlando Magic fired their head coach Stan Van Gundy on Monday. He's an elite coach who has developed an incredibly effective offensive and defensive system. He had five great years in Orlando. My question is: would you consider getting rid of Byron Scott if you had the opportunity to replace him with Stan Van Gundy?

I'd consider it -- because SVG is such a great coach. He's proven and he could do great things with the Cavs' defense, especially if they draft a big man like Drummond or Anthony Davis. I would pause when I consider the great relationship between Byron Scott and Kyrie Irving. The two seem to really get along and Scott has a pretty solid track record with point guards. Ultimately, I'd end up sticking with Scott and letting him ride out this rebuilding process. Some team, however, is going to hire SVG and get a fantastic head coach.