How's it going, everybody? You guys ready for the NBA Draft? Having a good summer so far? Good.

Days until the NBA Draft: 37 Days

Days until the NBA Lottery: 8 Days

Getting pumped yet? I booked my train down to NYC for the Lottery on the 30th. Can't wait.

Wanna see something disgusting? I introduce to you -- Dexter Pittman. The Miami Heat's useless big man (who for some reason started Game 3 of this series) threw his entire weight and elbow into Indiana's Lance Stephenson during garbage time of Miami's win last night. Stephenson had made a choke gesture in response to LeBron James missing some free throws earlier in the series and apparently LeBron didn't like that. So, in response, Miami retaliates by having one of their scrubs cheap shot Stephenson in the throat with an elbow. Classy. Stephenson had x-rays on his collarbone and they were negative. Going at a guy's throat is completely ridiculous and totally unnecessary. Not that it matters, but Pittman should be gone for 10+ games. Just when you thought you couldn't hate Miami anymore...

Ah, this is perfect because it leads directly into the next section. I spun the ESPN Mock Draft machine once and this is what came up. The Cavs got the second pick and selected Michael-Kidd Gilchrist from the University of Kentucky. Now, between things that I've heard and my own personal feelings, I have reason to believe that Bradley Beal and MKG are practically neck and neck on many draft boards. It's interesting to see that Chad Ford still has the Cavaliers selecting MKG if he is available. This leads me to my next link.... 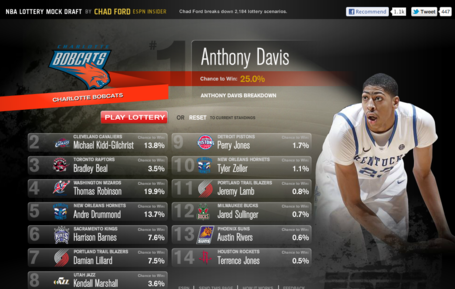 As most of you know, I've been a huge fan of Bradley Beal long before he shot up draft boards. When the Cavaliers were around 8th or 9th in the draft position, I thought there was a chance that Beal would fall to Cleveland and it'd be a fantastic steal. At this point, Beal is easily in everybody's top-5 prospects and could go as high as No. 2 in June. Anthony Davis is the clear No. 1 pick, but between MKG and Beal -- who do you take? Well as much as I love what Beal offers, Brendan Bowers' article from SLAMOnline yesterday reminded me why MKG was there in the first place. He's incredibly versatile and has fantastic character. If the Cavaliers land the second pick in the draft, you've got to take Michael Kidd-Gilchrist. Read this to find out why.

"That’s my best friend," Kidd-Gilchrist said of last year’s No. 1 overall pick. "I talked with him earlier today actually, and he just told me that the NBA is a man’s League. He said to just take my time with everything, off the court and on the court stuff, and just take my time in general. But most importantly, he just said to continue to keep working hard."

After Bowers' article got me thinking about MKG, it brought me to the Cavaliers' current situation at small forward. About this time last year, the Cavs traded J.J. Hickson for Omri Casspi and a conditional first round pick. The Sacramento Kings will eventually get good and the Cavs will eventually see that first round pick sent their way. But the other part of that deal -- Omri Casspi -- will he ever help the Cavs? He had a downright terrible season in his first year with the organization and lost his starting job to Alonzo Gee. My question to you is: do you think Omri Casspi will ever play a significant role on this team? He's still young and still has a lot of the tools that made him a first round draft pick. Will he develop those skills and become a solid rotation player on a good team?