Good morning folks. Let's get right into this.

Days until the NBA Draft: 36 Days

Days until the NBA Lottery: 6 Days

There was just one game in the NBA playoffs last night. The Sixers welcomed the Celtics trying to force a Game 7 in what has been one of the most unwatchable playoff series in recent memory. Sure enough, Philly pulled off the Game 6 win and will play the Celtics in a decisive Game 7. One of my favorite players in the league, Andre Iguodala, provided the biggest highlight from last night's limited basketball action. For your viewing pleasure, here is Iggy obliterating the rim and some of Paul Pierce's face with his sad excuse for a beard.

Nothing super interesting here today. Things got shaken up around the Cavs, but the team with the 3rd best odds ended up just sitting at third. That means Anthony Davis and Michael-Kidd Gilchrist are off the board, so Bradley Beal is the obvious choice. Nothing wrong with Bradley Beal at all. That'd be a damn nice draft. 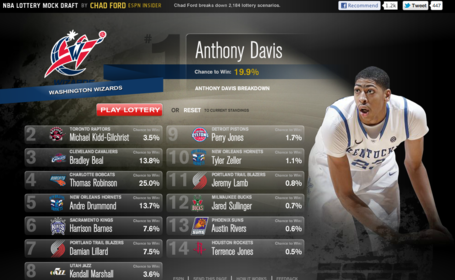 The NBA All-Defensive teams were announced yesterday. As expected, the voting was absolute trash once again. Andre Iguodala was not on either team and Kobe Bryant made the 2nd team. Both of those things are absolutely insane. Serge Ibaka made the first team despite biting on literally any pump-fake that you throw at him. COUNT TEH BLOCKZZ, apparently. Zach Lowe from Sports Illustrated points out how ridiculous it is that Iguodala didn't get recognition. Also, Tyson Chandler, the winning of the Defensive Player of the Year award, was not on the All-Defense 1st Team. Wait, what? Yeah. So apparently the best defender in the league is not one of the top five defenders in the league. Makes sense, right?

Rondo is a pest, but his defense has dropped off a bit this season. That’s partly because Avery Bradley emerged in Boston to guard the ball, and also because Rondo has had to assume a larger and larger burden on offense as the Celtics’ Big Three age. Rondo has been more vulnerable to one-on-one blow-bys this season, and he is always a bit prone to gambling. He’s a fine defender, but if we can remove him (or even Paul, also a fine defender) to find Iguodala a slot, we should. Opposing small forwards registered a microscopic Player Efficiency Rating of 8.7 when Iguodala was on the floor for the Sixers, a fancy way of saying that Iguodala turned his counterparts to mush as the lead star of a top-three defense.

So, basically when your small forward goes against Andre Iguodala, he turns into Omri Casspi. Think about that for a second. On average, he held opposing small forwards to a PER similar to that of Omri Casspi. I can only imagine what would happen if he were guarding Casspi. *shudders*

The Cavaliers called up a bunch of guys from the D-League this past season. Some of them were decent, but nobody really stood out. Lester Hudson is gone, so that leaves us with DJ Kennedy, Donald Sloan, and Manny Harris going into next year. If you had to guess, which of those D-League guys do you think has the best chance of sticking around with the Cavaliers past training camp next season? My best guess is that it would be Sloan because there is a wide open chance for him to be the backup point guard. There are no other point guards on this roster after Kyrie Irving. He simply has the best opportunity. If Manny Harris can learn to play at a consistent level, maybe he can be a contributor. But I have my doubts.