We're closing in on the NBA Draft Lottery and the final four for the NBA playoffs are almost set. The Miami Heat beat the Pacers last night and advanced to the Eastern Conference Finals and await the winner of Celtics-Sixers Game 7 on Saturday night.

Days until the NBA Draft: 35 Days

Days until the NBA Lottery: 5 days

Want to see LeBron James miss an open layup and fall down? Of course you do. Every other highlight from this game was just Dwyane Wade dunking and making ridiculous bank shots. I figured you'd like to see this more.

Poor Bobcats, falling to the fourth pick. Like I've said before, if this happens and we get the 2nd pick and take Michael-Kidd Gilchrist, I'll be a very happy Cavs fan. 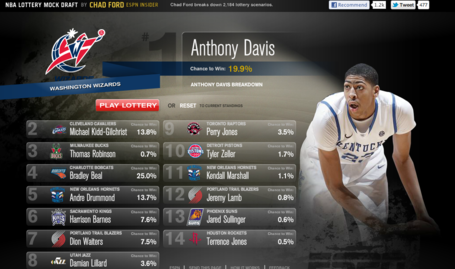 This is a good one. From SBNation's very own Mike Prada, this article explains to you how the Boston Celtics could end up in a Game 7 with the Sixers. The bottom line is: the Celtics aren't very good. Their offense stinks and the reason that they looked so good temporarily was that Kevin Garnett was playing like he was 29 years old again. He's not 29 years old. He's much older than that. He's come down to earth significantly and so have the Celtics. If they advance and face the Heat in the ECF, I expect a Miami victory in 5 games.

Boston is now 7-5 in the playoffs following the Game 6 loss, and that's against two relatively mediocre teams (by playoff standards at least) in the Atlanta Hawks and 76ers. They've dominated from start to finish in just two of those games (Game 4 against the Hawks, Game 3 against the 76ers). Take away those two games, and the Celtics have outscored their opponents by a total of six points in this postseason. If Al Horford returns three games sooner from injury, the Celtics may not even be here right now.

The All-NBA teams were released yesterday and not surprisingly, no Cavaliers were on any of the three teams. Kyrie Irving is obviously the closest Cavalier to making one of the those teams, so my question to you is: will Kyrie Irving make an All-NBA team next season? I tend to think he won't, but he'll at least get some votes for them. Although, I wouldn't at all be surprised if he makes the second or third All-NBA team. He's that good.