So there wasn't any NBA basketball last night, which is lame. Also, the Indians lost. So that wasn't very fun. But I can cheer you up by letting you know that there are just 4 days left until the Lottery. Also, we've got new people to comment on articles and talk about the Cavs because the lurkers aren't going to lurk anymore. Right? RIGHT?

Days until the NBA Draft: 34 Days

Days until the NBA Lottery: 4 Days

No basketball last night. Indians lost. There was hockey that sent the New Jersey Devils to the Stanley Cup Finals but...who cares? Instead, I've got Bradley Beal putting someone on a poster. Even though he had a little bit of trouble with his shooting stroke at Florida, all the scouts are convinced that he's going to be a phenomenal shooter in his NBA career. But did you know that he can also do this?

Hey, what do you know? Our good friend Bradley Beal. I think we have established one thing with all of this draft preparation: Any of the top three players (Davis, MKG, or Beal) will be an awesome addition to the Cavaliers. After that, there are plenty of good players but it gets a little murky. The top three are pretty much locks to be good pros. 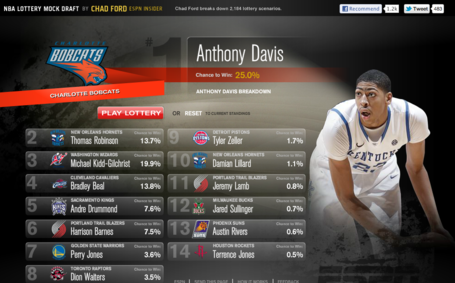 We've all agreed to just ignore the Eastern Conference, right? Good. The Western Conference Finals are basically the NBA Finals because I think Oklahoma City and San Antonio are just that much better than all the other teams. In order to get ready for the WCF that starts Sunday, we've got a roundtable discussion about it on Hardwood Paroxysm. I took part in this, so this is a bit of shameless self-promotion. Regardless, it's a good read.

1. Which 6th man will have a bigger impact – James Harden or Manu Ginobili?

Amin Vafa: I saw someone say a while back (can’t remember who, sorry) that Harden reminded them of Ginobili from a few years ago. These two guys are so integral to the success of both teams that it’s nearly impossible to tell who’ll have a bigger impact. I think I’m going to have to go with Ginobili, though. He’s been healthy this year (NOT TRYING TO JINX HIM I SWEAR. I LOVE YOU MANU), and you can already tell they’re a vastly different team with him around.

Matt Moore: Manu. Harden is aggressive and pushes to the rim, but Ginobili is able to take over the game without needing turnovers that Harden doesn’t have. Ginobili’s craftiness with his experience means he always manages to sneak into those spots for a three, to find that breakdown in coverage, to make the steal, the swipe, to draw the foul. It’s a great -, but Ginobili is due for a huge series, and as we saw against L.A., Harden isn’t up to to the task defensively. This will be the first series where the opponent has a weapon defensively against Harden. Manu’s like a Swiss Army Knife. Really versatile and really annoying with everything it can do.

As you probably know, Kyrie Irving was named to the USA Select Team and has a chance to play for Team USA in the Olympics in the future. Similarly, Anderson Varejao will likely play for the Brazilian national team in the upcoming Olympics. The Cavs organization doesn't appear to have any problem with Andy playing in the Olympics but with him coming off of that wrist fracture, there may be some reason for pause. Would you have any problem with Varejao playing for Brazil in the Olympics? I don't think I would, but I really don't want him to get hurt again. Stay safe out there, Wild Thing.