The Cavaliers have a lot of decisions to make this off-season. Who do they draft? What key free agents do they target? And finally, the point of this series, who from this current squad to they bring back? Today we kick things off with the only player up for a team option next year, Daniel "Boobie" Gibson. Today, I spell out the contract situation, dig into some stats and then open up some discussion for you all below (with a poll!). On Monday, I'll be back to share my opinion.

Before we go any further, I'd like to say that all the contract data from courtesy of HoopsHype, and player statistics are from Basketball-Reference. Graphs are my doing. Now, let's figure this out.

The Money: After six years with the Cavaliers, Boobie is due a pretty massive payday of $4,792,332 next season. That is, if the Cavaliers decide to pick up his contract. Only $2.3M of his contract is guaranteed, so the remaining $2.5 is up in the air. While the salary cap for the 2012-2013 season won't be known until July, we can look at the impact of picking up Gibson's contract using the 2011-2012 salary cap of $58M as an estimate. Right now, the Cavaliers only have six players guaranteed next year, Anderson Varejao, Luke Walton, Kyrie Irving, Tristan Thompson, Donald Sloan and Omri Casspi. Those six contracts sum to just slightly more than $22, which would leave an additional $35M to resign guys like Alonzo Gee, Samardo Samuels and Manny Harris and to go after any free agents the Cavaliers may have their eyes on. If the Cavaliers were to resign Gibson, that would drop that amount to around $33M.

Now you might be wondering about the two rookies the Cavaliers will be selecting in the first round. Thanks to the Rookie Exception Clause, the Cavaliers will be able to exceed the salary cap in order to sign them to their rookie contracts, so I'm not counting these two contracts towards that total. That would not be the case with any second round picks they acquire, however.

Now, onto the fun stuff. Let's take a deep look at Boobie Gibson from a statistical standpoint.

The Stats: The first thing I was immediately concerned about when it comes to Boobie is injuries. After sitting what felt like a substantial amount of games last season, he then followed it up by missing another substantial chunk of games this year. But, how does this look compared to his career?

Despite his injury problems in the 2010-2011 season, Gibson suited up for more games that season in his career other than 2008-2009. This year however, was another story entirely, with Gibson only playing in a little over half of the Cavaliers games. Of course, there's more to this than just how many games Gibson is hitting the floor for. 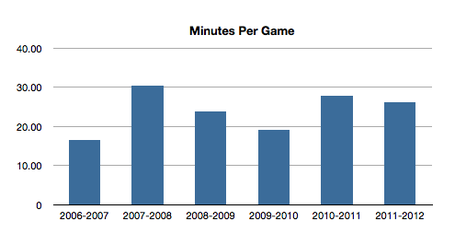 Outside of the 2007-2008 season, Gibson's been playing the most minutes of his career in the past two seasons. This will become important soon.

Despite playing some of the most minutes of his career in the past two years, as Daniel Gibson has had to shoulder more of the Cavaliers offensive burden, he's posted the two worst effective FG percentages of his career. In 2009-2010, when he posted the best EFG% of his career, he was also playing the lowest minutes of his career. Looking at this, it's not hard to draw the following conclusion, Daniel Gibson should be coming off the bench. The less minutes he plays, the better he shoots. While I know correlation does not equal causation, anecdotally, Cleveland fans know that Gibson's a streaky shooter. If he's on, he can put up 18 and help the Cavaliers get back into a game or seal a victory. If he's off, you'll be screaming every time he launches a three. That's not what you want from a starter.

Now what about his much-vaunted defensive capabilities? Well, he's improved, but at a cost.

In blue, we have Daniel Gibson's offensive rating. In green, his defensive rating. While the first four years of his career were relatively consistent, since Byron Scott has taken over for Mike Brown, Gibson's defense has improved slightly. However, this has come at the cost of a significant decline in his offensive potency. More worrying, Gibson had a drop-off in his defensive rating between the 2010-2011 season and now. If that season was a fluke and he returns to his previous level of iffy defense, you suddenly have a player who's regressing significantly offensively and is no longer making up for that by keeping his man in check.

Conclusions to Keep in Mind:

So what do you think Cavs fans? Do you take a roll the dice and pick up Boobie's team option? Or are you hesitant enough where you let him walk and go all-in on Manny Harris and rookies/free agents? Are there intangibles I'm missing that sways your decision either way?