Harrison Barnes, Bradley Beal to Workout for Cavaliers on Saturday

Share All sharing options for: Harrison Barnes, Bradley Beal to Workout for Cavaliers on Saturday

According to Jeff Goodman from CBS Sports, the Cavaliers will bring in both Harrison Barnes and Bradley Beal for workouts on Saturday. It's relatively unusual for agents to let two top prospects actually compete against one another in a workout, but that sounds like what will happen on Saturday in Cleveland. The Cavs will get their own private look at the two players and it's pretty likely that one of the two will be wearing Wine and Gold next season. 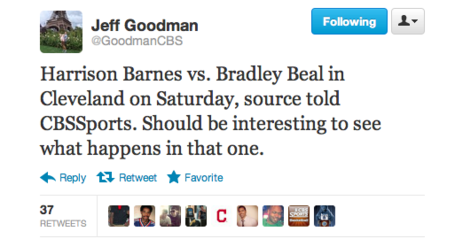 Just as they did for Bradley Beal and the other top prospects, DraftExpress produced an awesome scouting video on Harrison Barnes. They break down his game and highlight some of his strengths and weaknesses. For those of you that like comparisons, they liken him to Luol Deng, but I tend to disagree with that to a certain extent. I think he'll be a far better scorer in the league than that, truthfully. Check out the video here.