I intend for this to be a fairly quick post based on some brief research that I did this morning. Whether or not it ends up being quick remains to be seen. I know lots of people have been freaking out about Dion Waiters' shooting percentage and efficiency during his three games of Summer League. I preface this post by pointing out that this is an extremely small sample size and isn't really an indicator of anything as far as statistics are concerned. Regardless, I studied the film and the numbers to get a better idea of what was going on. I'm not sure if it will make you feel better or worse about his performance, but here's what I found.

Note: all stats and data are from Hoopdata.com and nba.com/stats

Over his three games, Waiters shot 12 of 40 from the field, or 30%. That's...not good. But when I was watching the games, I honestly didn't think he played that poorly. He wasn't good, don't get me wrong. But I didn't think he was quite that bad. So I looked into where his shots were coming from.

Here are Waiters' shot charts from the three games that he played in Las Vegas. 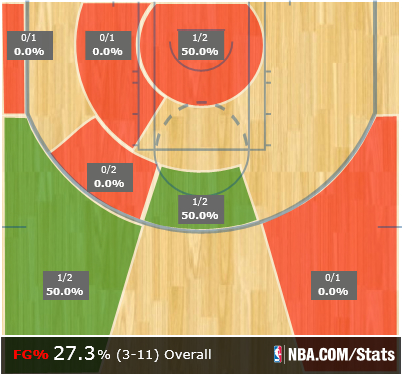 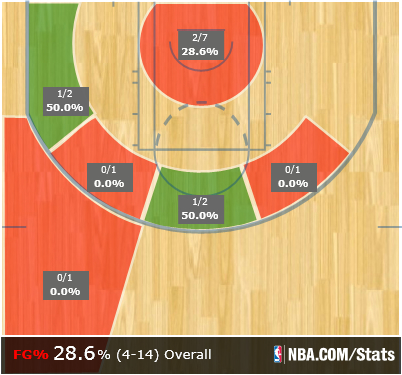 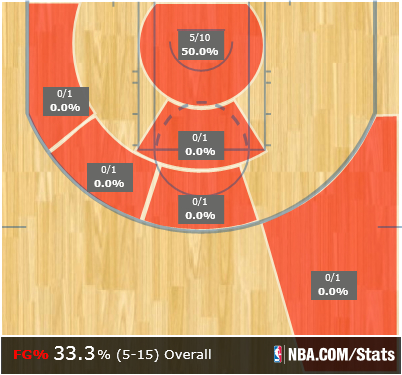 As you can see, his first game was pretty terrible. He took shots from all over the place, but that's kind of expected from a player's first NBA game.

In the 2nd and 3rd games, however, exactly half of Waiters' shot attempts were right inside that restricted area under the basket. In other words, he was taking shots in close proximity to the rim and not settling for jumpshots. He was getting to the rim -- that's important. Overall, he took 19 of his 40 shots (47.5%) at the rim or in the restricted area. The bad part is that he converted just 8 of those 19 shots (42.1%). According to Hoopdata.com, the league average last year on shots at the rim was 62.7%. For guards it was a bit lower, at 60.4%. As you can see, Waiters wasn't even close to that. Instead of shooting the relatively normal 60%-ish, Waiters shot 42.1% or just slightly higher than Derek Fisher's 41.4%.

This isn't shocking. By just watching the games, you could see that Waiters was having a hard time finishing at the rim. There were many times when he'd make a great move to get past a guy and then blow a relatively easy layup. So how is any of this encouraging? Well, I tend to think that it's pretty significant that he was able to get to those spots and take those shots (which are generally pretty high-percentage shots). As a matter of fact, he got there 6.33 times per game. (I know this is an unfair comparison because it's NBA regular season vs. NBA Summer League, so take it with a grain of salt). When you look at guards that got to the rim 6.33 times per game last season, there's roughly two of them -- Tyreke Evans and Dwyane Wade. The difference is that those guys both converted more than 60% of their attempts while Waiters made just 42.1% of them.

In short, during his very brief stint in Summer League, Dion Waiters attacked and drove like Dwyane Wade, but finished like Derek Fisher. I have to think that his atrocious shooting percentage on those shots is somewhat of a statistical anomaly. Nobody can be THAT bad at the rim and the fact that he's able to penetrate and get that deep into a defense is certainly that should translate to the NBA -- at least to a certain degree.

Of course, this means that on his other shot attempts, he was an absolutely horrific 4 of 21 (19%). I have to believe that is somewhat of a statistical outlier as well. I think if Shaq took those shots, he'd shoot better than 19%. Waiters' jump shot certainly didn't look good, but he's not a guy who came out of college with scouts and experts tearing apart his perimeter game. He has a decent jumper -- but he didn't bring it to Las Vegas. He shot just 1 of 6 from three (16.7%). That's also terrible. But it's also a tiny, insignificant sample size. But then again, all of these numbers are. He shot 36.3% from three in college. I'd expect him to be closer to that number than 16.7% from three in the NBA.

I've maintained that it's really hard to draw any solid conclusions from three games of work, but if you want to, you might as well take the time to look at how the numbers got there. Yes, he shot 30%, but it wasn't as bad as it looks -- at least not in my opinion.

If you have questions, comments, or just want to insult me, feel free to email me at ConradFTS@gmail.com. Be sure to follow us on Twitter at both @FearTheSword and @ConradKaczmarek. Also, like us on Facebook.