Want another mind-blowing rumor? You got it. Along with the last post that I put up about the Cavaliers potentially helping facilitate a Dwight Howard trade, there was another thing that made me do a double-take when I saw it. Andrew Bynum is one of the pieces that could get the Magic to deal Howard to the Lakers. However, Bynum is an unrestricted free agent after this season and reports indicate that he will not automatically sign an extension when his contract ends. Yahoo! Sports' Adrian Wojnarowski reported that Bynum may test free agency next summer and the Cavaliers could be on his radar. 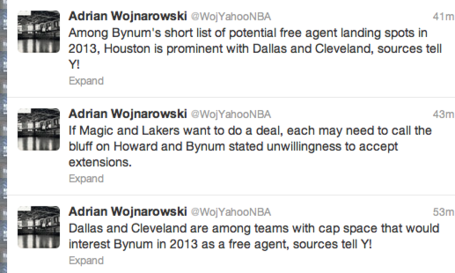 I kind of understand it. The Cavs have lots of cap room and Kyrie Irving could be pretty fun to play with. The only problem is that wherever he is at the end of this season, be it Orlando or Los Angeles, they'll have his Bird Rights. Therefore, if he were to leave in free agency, he'd lose roughly $25 million. Is he going to take a $25 million pay cut to come to Cleveland? That doesn't seem likely.