So all of SBNation NBA blogs are doing this thing where we write about the best trade ever made by our franchise. My mind immediately jumped to Chris Grant's best move so far -- the time he traded Mo Williams and Jamario Moon for Baron Davis and an unprotected 1st round draft pick. As you may know, we later amnestied Baron Davis and that draft pick turned into the first overall pick in the 2011 NBA draft, the 2011-12 NBA Rookie of the Year, and my Macbook's desktop background: Kyrie Irving.

Now, I'm going to continue as if this is the best trade ever made by the Cavaliers, but I asked on Twitter (shield your eyes, John!) and got some other responses. Perhaps you disagree with me, so argue your case in the comments. Remember, I'm pretty young so maybe there's something from before my time that I'm forgetting. Let me know. I want to argue with you. It will be fun and I'm bored.

Anyway, here's the trade that went down:

February 24, 2011: Traded by the Los Angeles Clippers (as a 2011 1st round draft pick) with Baron Davis to the Cleveland Cavaliers forJamario Moon and Mo Williams.

I've already written about the deeper history of this trade, so I urge you to read that as well. Here's the final paragraph of that post if you're lazy:

Cavaliers signed David Wesley as a free agent in 2006. Wesley then got traded to the Hornets for Cedric Simmons. Simmons then got traded to the Bulls in exchange for Joe Smith. Smith got paired up with free agent signing Damon Jones and shipped off to Milwaukee in exchange for Mo Williams. Mo Williams makes the trip out to Hollywood and the Clippers send the first overall pick in the NBA draft, future ROY winner, and owner of the 20th best PER in the NBA right now......

Pretty sweet, right? The Cavaliers didn't really give up anything and now they have one of the best young players in the league.

How did the Cavs get such a steal in this trade? Surely no team would simply give away Kyrie Irving for a veteran like Mo Williams, right? (Yeah, but it's the Clippers...) Still, even the Clippers aren't that dumb. At first, the trade didn't look like it overwhelmingly helped the Cavs, although getting a first round pick seemed like a good idea for a rebuilding team. Heck, even some basketball bloggers thought the Cavs made a dumb move.

The original deal was basically that the Cavs would take on the big remainder of Baron Davis' contract in exchange for a mid-lottery first round pick. Sounds pretty fair, right? Except that with the new CBA being worked out in that following offseason, each team got an amnesty clause to wipe one bad contract from their cap. Perhaps Chris Grant knew this would be coming or at least expected it. In that case, kudos to him. The other part about the trade that worked out so well was that the Cavs didn't get a mid-lottery pick. The Clippers pick had the 8th best odds in the lottery and happened to jump all the way up to the first overall pick. So instead of drafting Donatas Motiejunas with the 8th pick like Kelly Dwyer said they would (Motiejunas ended up going 20th, actually), the Cavs had the first and fourth picks which let them take Irving. Pretty solid, if you ask me.

Yeah, this one is pretty good. In 1986, the Cavs traded Roy Hinson to the Philadelphia 76ers for a first round draft pick. That pick ended up being the first pick overall and landing Brad Daugherty. As you probably know, Daugherty went on to have a pretty awesome, albeit relatively short NBA career for the Cavs. This trade was really a classic case of selling high on Hinson and getting a little lucky with Daugherty. Hinson posted a career high 17.4 PER in his last season with the Cavs.

Let's start with the last suggestion in this tweet, because it all ties together. To answer his question, yes, we did trade for Mark Price. Price was drafted in the 2nd round by the Dallas Mavericks in 1986. The Cavs then traded for Price by sending Dallas a 1989 2nd round draft pick, which later turned out to be used on Jeff Hodge. Now, Jeff Hodge doesn't have a basketball-reference page -- so that's a pretty good trade in and of itself. After a stellar career with the Cavs, Price was then traded to the Washington Bullets for a 1996 1st round pick in 1995. That first round pick in the 1996 draft was 12th overall and the Cavs used it to select The Ukraine Train -- Vitaly Potapenko. Potapenko is better known as "not Kobe Bryant", who was selected 13th overall in 1996. Some prefer to call Potapenko "not Steve Nash", who was selected 15h overall in 1996.

Anyway, the Cavs whiffed on that draft pick in 1996, but somehow managed to redeem themselves in March of 1999 when they traded Potapenko to the Boston Celtics for a first round draft pick. That pick turned out to be the 8th overall pick and was later used to take Andre Miller. Miller spent three seasons with the Cavs and had a PER of 20.2 during that time. Pretty solid.

That brings us to the Miller for Darius Miles trade. According to basketball-reference.com, this was the whole trade:

July 30, 2002: Traded by the Cleveland Cavaliers with Bryant Stith to the Los Angeles Clippers for Harold Jamison and Darius Miles.

Both Harold Jamison and Bryant Stith are equally irrelevant as neither played a single game with their new team in this trade. So basically, it was just Andre Miller for Darius Miles. In the 2002-03 season, Miles posted a PER of 9.7 while Miller recorded a PER of 15.2. Meanwhile, the Cavs' win total dropped from 29 wins to 17 wins from 2001-02 to 2002-03. This terrible trade ended up working in the Cavs favor because they were horrible enough in 2002-03 to land some guy named LeBron James. I've been told that he's okay at basketball.

In short (and somewhat simplified) it goes like this:

And now my favorite trade in Cavaliers' history: 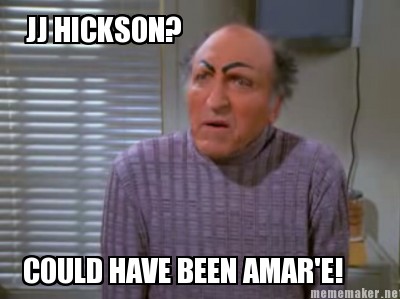 Ah yes, the trade that everybody thinks the Cavs turned down but never actually happened. If you don't get the Uncle Leo reference, ask Angelo on Twitter.

Here's the interview of Steve Kerr on the Dan Patrick show where he rejects the idea that the Cavs wouldn't offer J.J. Hickson. Also, have you seen Amar'e Stoudemire lately? He's not all that much better than Hickson and he's signed to a max deal. In your face, Uncle Leo!