Brace Yourselves Cavs Fans, Cavs Zine is Back!

In what's quickly becoming Cleveland's favorite annual sports tradition, the Bible of Cavs Fandom known as Cavs Zine is returning for it's third issue. This time, it's gonna be #TERRELMATIC

Share All sharing options for: Brace Yourselves Cavs Fans, Cavs Zine is Back!

That's right, the Bible of Cavs Fandom known as Cavs Zine is coming back just in time for the 2012-2013 season to begin. What's Cavs Zine? It's simple. Every year, a mysterious man known only as Cleveland Jackson assembles the greatest team of sports writers ever assembled to write about the greatest professional basketball team to ever play the game, the Cleveland Cavaliers. Who makes up this team you ask? Brace yourselves to be blown away and take a quick peek:

Artists
So yeah, pretty much anyone who's anyone in the Cleveland writing/art/food scene will be involved in some way in Cavs Zine 3. And, while I don't want to tip my hand and spoil what anyone's writing about, let's just say that I squealed in delight when I got the official article assignments this time around. Seriously, you have no idea how amazingly awesome this thing is going to be. The one thing that I can tell you is that Brandon Bowers scored an absolutely awesome interview with #TERRELLMATIC himself, Terrell Brandon. It's great stuff, like I said, you really have no idea how great this is going to be.
Did I also mention that Cavs Zine is absolutely free for Cavs fan? What about the fact that it will be coming with your official "UNCLE DREW ARMY" patch to sew over those awful ad patches the NBA is going to start putting on jerseys next season? Or that there are absolutely limited copies, so you'll have to act fast to insure you get a copy? Yup, all those things are true. Don't worry though, there will also be online distribution for those of you not in Cleveland. We're thoughtful like that.
There will be more information coming soon including where and when you can get your grubby little mitts on a copy. Until then, just wait patiently and sleep patiently while dreaming of Terrell Brandon carving up suckers at the Gund wearing the black and orange. Cavs Zine will be here soon enough, and it won't disappoint. 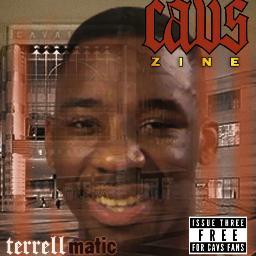