The Cleveland Cavaliers are in the midst of a rough road trip. They traveled to Sacramento for a fairly winnable game. Unfortunately, the defense decided not to show up and the result was an ugly loss.

The Cleveland Cavaliers and Sacramento Kings own the 27th and 30th ranked defenses, respectively. So basically, this is actually what we should have expected. Neither team played any defense and the Cavs simply played less defense. At the end of the day, the Kings walked away with a 124-118 win over Cleveland.

The good came from a man named Dion Waiters. He's a rookie shooting guard and he's had a pretty rough season up to this point. There's no doubt that Waiters is super talented, but he's struggling to use that talent appropriately. His shot selection is poor and he doesn't really seem to know how to play within an offense when he doesn't have the ball in his hands yet. Now, although his body of work up to this point isn't impressive and has some fans (cough WitMi cough) freaking out, the words "super talented" still mean something. When you have a super talented player, such as Dion Waiters, you will sometimes get glorious flashes of what could be. You briefly peek into the future and see the beautiful results that could eventually become regular occurrences. That is what we saw Monday night against the Kings. Nevermind the fact that he was playing against Jimmer Fredette and the worst defense in the NBA. At times, the best defense against Dion has been Dion himself. On Monday, he channeled all of that talent and used it for good instead of evil. He used it to relentlessly attack the rim instead of hoisting step-back 20 footers.

And the result, you ask?

Dion got some love from the refs (finally) and that seemed to encourage him to continue attacking. He also hit all three of his three-point attempts because they were good shots and they were within the flow of the offense. His shot chart should be printed out and taped to the inside of his locker. 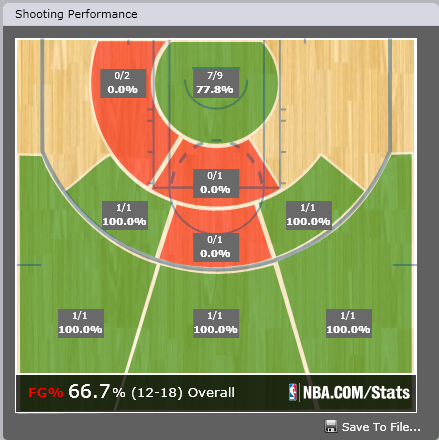 There were still some crappy jumpers that we could do without but for the most part, it was a much better style of play for the Cavs' rookie shooting guard.

Similarly good was Tristan Thompson. In Monday's game preview, I asked that Tristan get back to his dominance on the boards and have something like a 15 rebound game against Sacramento. I'm not saying Tristan reads FearTheSword, but it's probably his homepage. TT responded with 17 points and 15 rebounds. 8 of his rebounds were on the offensive glass and certainly helped the Cavaliers get some extra chance points. Although his defense wasn't quite up to his regular standards, he still had a solid game. Tristan just keeps producing in Anderson Varejao's absence and his work on the offensive boards would make the big Brazilian proud.

Omri Casspi is still loved in Sacramento, apparently. He talked to a group of fans before the game and had a relatively solid game. He scored 10 points on 4 of 5 shooting in his 11 minutes of playing time. Maybe Omri deserves some more minutes?

Man, what was up with Kyrie Irving last night? He seemed to be in a funk all evening and simply could not get himself going. We've gotten pretty used to Kyrie taking over in the fourth quarter of games, but he didn't have it Monday night. He shot just 6 of 19 from the field and committed some really bad turnovers down the stretch. He over-dribbled at times and failed to recognize when the Kings' defense was sending hard traps and double-teams at him. Sometimes you forget that Kyrie is just 20 years old and by no means a finished product, but games like this remind you of that. It's a shame that we got a rare bad game from Kyrie on a night that saw Dion and Tristan be so effective.

I guess I'll forgive him.

Defensive rebounding also falls into the category of bad. The Kings had 16 offensive rebounds. That is way too many. Tyler Zeller only had 1 defense rebound. How is that possible? The Cavs cannot be giving other teams so many second-chance opportunities. They will lose games. It's rare enough that the defense gets a stop. They cannot then turn around and give the opposing team a mulligan.

Speaking of the defense....

This freaking defense, man. As I said before, the Cavs entered the game with the 27th ranked defense in the NBA. I have to figure that that number is going up after last night. The Sacramento Kings scored 124 points in regulation! They shot 51% from the field and 47% from behind the arc. Their offensive efficiency was 129.8 points per 100 possessions. That's really not good. DeMarcus Cousins did whatever he wanted en route to 26 points on 14 shots. Tyreke Evans scored 18 points on 6 of 6 shooting! Marcus Thornton scored 20 points and Jimmer scored 16 points! That's a lot of points!

The Kings scored 69 points in the first half. The Atlanta Hawks scored 58 points in the ENTIRE GAME against the Chicago Bulls last night

The Cavaliers have a day off today (Tuesday) and then take on the Portland Trail Blazers on Wednesday night. It's another late game for those of us in the Eastern time zone -- tip off is at 10:00 PM. The Blazers are fairly hot right now and we might get to see the two worst benches in the NBA square off. Should be fun.