Then and Now: A look at the post-Decision Cleveland Cavaliers

The Cleveland Cavaliers are still sitting at the bottom of the Eastern Conference. They have just 11 wins. But that doesn't mean they haven't made progress over the past two season. Let's see how far they've come.

Share All sharing options for: Then and Now: A look at the post-Decision Cleveland Cavaliers

Step into my time machine.

(waits for you to step in)

Okay, welcome to my time machine. I am going to take you back in time. It's going to be ugly. How far are we going back? We'll go back exactly two years -- January 25th, 2011.

It's the first season following LeBron James' decision to leave the Cavaliers and sign with the Miami Heat. The Cavs are in the middle of an epic losing streak. Last night, Cleveland lost its 17th game in a row to the Brooklyn New Jersey Nets. This loss sent the Cavs to 8-36 on the season. 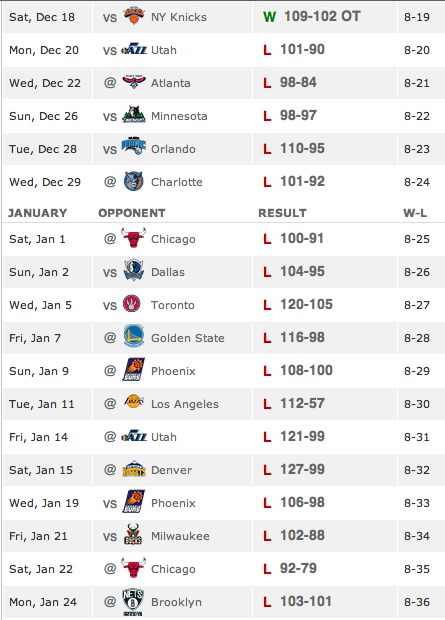 Now, you might look at that record and think "Hey, Conrad -- the Cavs only have 3 more wins this year. They are teh sucks. Why dont they trade for some all stars? Duh." But you would be wrong.

Sure, they only have three more wins but improving a rebuilding team is so much more complicated than pure wins and losses. For starters, let's look at this box score.

The Cavs lost LeBron and then their starting small forward was Christian Eyenga. He played just 19 minutes in this game. Wait, why would our starting small forward only play 19 minutes? Surely that means we have some super-sub off the bench that we play instead? Yeah. Joey Graham played 29 minutes. Joey Graham. In 2013, Joey Graham is playing for the prestigious Guaynabo Mets, a professional basketball team in Puerto Rico. Ryan Hollins played 22 minutes. Manny Harris played 21 minutes. This team was atrocious. This is actually right around when I started blogging about basketball. What the hell was I thinking?

Anyway, that's where we are in 2011. The Cavs are being led to a narrow loss after Ryan Hollins was desperately trying to foul Brook Lopez on the final shot, but the refs didn't call it and the Nets won. Daniel Gibson clanks a three pointer at the buzzer and the Cavs lose their 17th straight. They then go on to lose 9 more games before beating the Clippers and ending the streak at 26 games. I remember where I was when I watched both of these games. How sad is that? Anyway, back to the Cavs.

So the Cavs are being led by Antawn Jamison and J.J. Hickson and getting major contributions from five players who are no longer in the league just two years later. They have one draft pick in the upcoming draft, which is considered to be one of the weakest in the past 10 years. Anderson Varejao is hurt (some things never change, unfortunately) and they don't really have financial flexibility. Jamison has another year on his deal. Hickson is set to get a decent pay day thanks to his inflated stats on this awful team. I remember being upset that Anthony Parker was out for this game against the Nets. Think about that.

Get back in the time machine, leave that nightmare, and come back to 2013.

The Cavaliers have just 11 wins and are still in last place in the Central Division, but it's nothing like 2011.

What's the difference? Chris Grant and the Cavs' front office traded Mo Williams to the Los Angeles Clippers for Baron Davis and a first round pick. The Cavs would amnesty Davis and free up more cap space. That first round pick would turn into a kid named Kyrie Irving. In 2013, Kyrie Irving is the 6th youngest All Star in NBA history and the 6th leading scorer in the NBA. The Cavs also made some other smart trades to position themselves nicely for the future. They avoided paying J.J. Hickson any money by trading him to the Sacramento Kings for Omri Casspi and a future first round pick. They drafted Tristan Thompson -- a young, athletic power forward who has built on his game restlessly and is emerging as a very good NBA player. They acquired a crapload more draft picks, 6 of them in fact. The Cavaliers acquired six first round draft picks since the time that LeBron James left Cleveland. They are getting meaningful contributions from talented 20-year olds and veterans on affordable contracts. They have $20 million in cap space to work with.

If you want to look at the win totals from 2011 to 2013, you won't see much change. But if you look just a tiny bit deeper, you'll see that there are massive differences. The Cavs were one of the worst teams in NBA history, lost 26 games in a row, and had absolutely no sense of hope for the future. But thanks to a savvy general manager and a patient owner, the Cavs have completely reloaded their assets and have plenty of options for the future. Chris Grant managed to trade for so many first round picks that it's literally getting hard to keep track of all of them.

Walk into Quicken Loans Arena and you can find hope by the truckload. Watch Kyrie explode for 41 points at Madison Square Garden. Watch Dion Waiters drive to the basket at will and ooze with untapped potential. Watch Tristan Thompson develop from a goofy, clumsy one-dimensional player into a double-double machine over the course of a few months. The Cavaliers have managed to shed all bad contracts and every win comes only from players who are directly tied to the team's future. No more Anthony Parker winning meaningless games with random 27 point outbursts. No more empty triple-doubles from J.J. Hickson (points, rebounds, and missed rotations).

Today on January 25th, 2013, the Cavaliers will go for their 12th win of the season against the Milwaukee Bucks. You can choose to look at the win totals and think that the Cavs haven't made any progress. You can think that this is a "slow rebuild." You can demand that they stop trading for future lottery picks and start trading for current All Stars. But that's your choice.

Today, I see a team that was at the absolute bottom of the NBA just two years ago. They had nothing. I watched them lose 26 times in a row. Twenty six. If you had told me on January 25th, 2011 that the Cavaliers would be chock full of young talent and have one of the youngest All Stars in NBA history in just two years, I'd have called you insane.

When the Cavs beat the Miami Heat in 2011, I told you that the worst days were behind us, that there were better days on the horizon for our beloved Cleveland Cavaliers. When Kyrie Irving steps onto that court in Houston this February, I'll think about how much progress this franchise has made over the past two seasons. More importantly, I'll think about how much more it can accomplish over the next two seasons.

Cavs fans had their hearts ripped out and then endured one of the worst seasons in the history of the sport. But finally, I think there's a light at the end of the tunnel. Finally, there seems to be some sort of redemption coming for this proud franchise, this resilient city, and these passionate fans. I can't wait to see what the future has in store for us.