Analyzing some of the criticism regarding Dion Waiters

Coach David Thorpe of ESPN's Insider released his newest set of rookie rankings today, and Dion Waiters does not rank highly. I look into some of the places where Waiters can improve.

Share All sharing options for: Analyzing some of the criticism regarding Dion Waiters

Dion Waiters has been the subject of divided opinions so far this season. A lot of people in Cleveland really like what he's done. However, most national reporters are less than impressed with how Waiters has developed. One of the most outspoken critics of Waiters so far has been Coach David Thorpe of ESPN Insider.

Today, Thorpe released his most recent thoughts on Waiters and they weren't promising.

No rookie is giving off the appearance of success but actually not doing so well more than Waiters. He is full of highlight plays and exciting moves, but he is not helping his team win games. Waiters played in eight games in December, and in seven of them he scored fewer points than the number of shots he took.

In the one game in which he scored more than he shot, it was 18 points on 17 shots. He's still struggling with shot selection. His quick trigger for bad shots is keeping him from creating driving opportunities to get fouled and make free throws, which is the best way to drive up his bad "points per shot" number.

Some experts thought he had a lot of Dwyane Wade in him, and on some plays I can see why. But in reality they are worlds apart. Wade took 13.1 shots a game as a rookie -- 0.9 of those shots came from 3, and he earned over five free throws a game. Waiters is currently taking 14.7 shots per game, 4.8 coming from 3 and just 2.7 free throws per game. There is a lot of time for him to figure things out, and working to get better shots and more free throws is a great place to start.

As I said, Thorpe has been one of the most outspoken critics on Waiters this season. He has him at 17th in his rankings even though going by counting statistics Waiters looks to be an All-Rookie team possibility at the end of the season. But right now, Thorpe is right. According to 82games.com, Waiters does have positive on-court/off-court stats, with a net rating of +6.3. The offense in particular has been much stronger with Waiters on the floor, as they average 107.8 points per 48 minutes compared to only 98.0 with him off the floor. However, His comparative PER ratings at the SG position (where he gets most of his time) are very weak. He has a PER of 10.5 at the SG spot, while his opponents have a 16.2 rating, meaning his net PER rating is a -5.6. This says to me that even though his on-court/off-court stats are strong, this might be due more to his teammates than to his play, especially when it comes to defense, where the Cavs are actually better with him off the floor.

Even though the offense is stronger with him on the floor, his stats don't really bear that out. Right now, Waiters is 90th out of 92 qualified guards (only Norris Cole and Austin Rivers below him) in true shooting percentage. The guy simply takes too many bad shots. We can only ignore his shot selection for so long. So far, he has two big issues as far as his shooting: settling for jumpers and inefficiency at the rim. Both of these issues are highly correctable though as I'll go into here.

1. Settling for outside jumpers

His biggest issue is settling for too many jumpers. So far this year, he's taken 207 shots from 16 feet or farther out, and only 144 shots within nine feet. For driving guards like Wade and James Harden, this is normally much closer to a 50-50 split (or in Wade's case, actually reversed in terms of getting to the rim). This is something that will probably be corrected as he gets more experienced or even gets better teammates. Pretty much, he just needs to stop shooting as much from out there. When Ben Swanson (@CardboardGerald to Twitter folk and Rufus On Fire of SBNation's editor) is making jokes like this one earlier today, you know it's a problem:

@CardboardGerald: you probably don't have to do this to force Dion Waiters into a bad shot, but it probably might helpcdn2.sbnation.com/uploads/chorus... 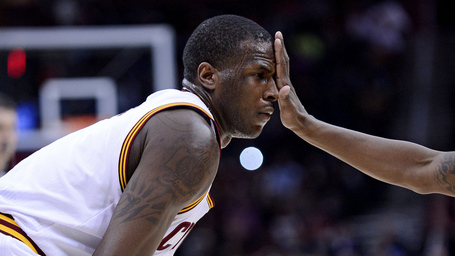 And that's pretty much true. Right now, Waiters is pulling up from just about everywhere. I'd give you a picture-by-picture breakdown, but you can already see it I think. Sometimes he has an open lane and just passes on it for jumpers. It would be the most boring breakdown of a play ever. He does it constantly. As he continues to get older, I think this stops. But right now, Thorpe is right and Waiters settles too much. I still maintain that I'd rather have this problem than the one Washington is having right now with Bradley Beal, where he takes the right shots but can't seem to even make open shots. Waiters' problem seems much more correctable than that one to me.

2. Problems with inefficiency at the rim

However, his settling for jumpers is NOT related to his driving ability. According to HoopData.com, Waiters is attempting 4.0 shots at the rim per game, which is fifth in the NBA among shooting guards. So Waiters is clearly getting to the rim just fine. He does have a problem finishing once he gets to the rim, but his 49.5% mark at the rim is trending upwards from where it was a month ago and is getting closer to the league average of 63% for shooting guards. The most problematic thing he seems to do is avoid contact when he gets to the rim, which leads to less foul calls (something that Thorpe alluded to in his piece). This leads to a worse shooting efficiency at the rim, which therefore is part of the reason his TS% ranks so poorly. Here's an example of that from the Atlanta game on December 28th: 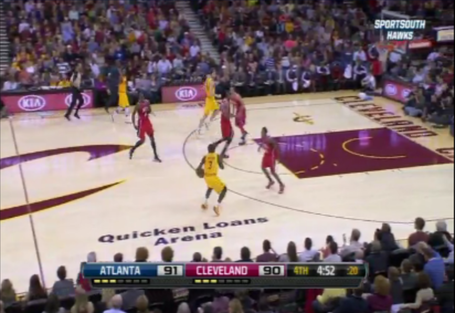 Waiters has the ball in transition here and he's about to make a quick crossover dribble to get past Lou Williams. The Hawks defense is getting back but this isn't the worst idea as the lane is still clear. 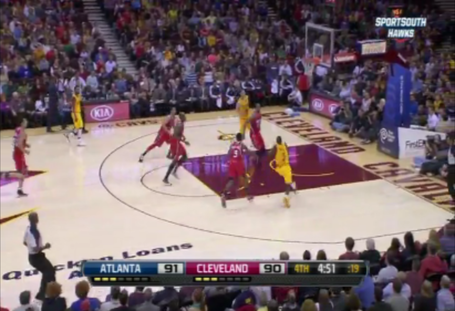 Waiters is now gathering to go to the hoop with one thing in mind: score. However, now Al Horford has gotten back and is going to make things a little bit difficult for Waiters. The best option for Waiters would be to look up and hit Kyrie Irving at the top left corner of the shot for a trailing three-pointer. But Waiters hasn't noticed and is going up. Here's where we'll see his biggest issue when going to the rim. 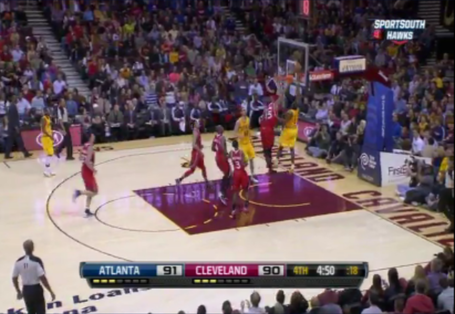 Waiters goes up for the bucket and certainly has beaten Horford to the spot. However, instead of going at the shot blocker's body, he goes away from him for avoid contact. This is problematic for two reasons. First, this obviously lets Horford's length become a factor. As you can see from the picture. Horford has made full extension of his arm, which makes for a much more difficult shot for the 6'4" Waiters to get off. Second, and most importantly, Horford has made no illusion of going straight up. He basically leapt into where Waiters took off from, and this is an easy foul for Waiters to draw if he just straight at the hoop. Basically, Horford is conceding the foul here in order to make Waiters earn it from the line. By leaning away, Waiters misses the shot, and misses an opportunity to go to the line and pick up a couple of free points. If Waiters starts drawing more foul calls, you'll see a spike in his TS% and overall effectiveness.

Luckily, this problem is also pretty correctable with experience. The more he plays, the more he's going to figure out to lean into shot blockers in order to draw fouls. Also, with more professional experience, the stronger he will become which should give him more confidence to go straight into these shot blockers and finish with contact. That should help get him up to league average when it comes to finishing at the rim.

Overall, I see Thorpe's criticisms of Waiters as fair. I don't think that Waiters has been only the 17th best rookie this season, but whatever. It's just a ranking based off of 25 games. That's not the important part. The important part is what Thorpe says about Waiters and how he can improve. The thing I'll be most looking forward to watching tonight is if Waiters adjusts his game at all to coming off the bench. As I stated earlier, he did seem to try to get to the bucket more in the game against the Kings, so maybe we'll see a more attack-oriented Dion as he comes off the bench. That would be a more effective Waiters in my opinion, as that would lead to less pull-ups and hopefully more foul shots for Waiters in the future.