The Cleveland Cavaliers are incredibly bad at transition defense

The Cavaliers have not been able to play transition defense at all this year. I take a look at why.

Share All sharing options for: The Cleveland Cavaliers are incredibly bad at transition defense

To say the Cavaliers have been a disaster in transition this season would be an understatement. With the team they presently have constructed, including Kyrie Irving, Dion Waiters, Alonzo Gee and Tyler Zeller all starting and being strong transition players, this is a team that you would think plays more uptempo than they do. Unfortunately, they have only gotten out into transition offensively 12.4% of the time, which is still in the bottom half of the league. And their inefficiencies there are well chronicled, as Synergy has the Cavaliers as the third-worst team in the NBA at 1.04 points-per-possession in transition on offense.

However, their transition offense has not been nearly as maddening to watch as their transition defense. I've used the term "dumpster fire" to describe it on Twitter this season, but I'm not sure that even covers it. According to Synergy, they're at 24th in the league statistically at stopping the fast break, giving up 1.18 points-per-possession. While that's problematic in its own right, the biggest issue is that they have allowed the second highest percentage of their defensive possessions to be turned into fast breaks, at 14.2%. When you combine these two numbers together, the Cavaliers have given up more points in transition than any team in the NBA so far this season.

So why is that? Let's take a look at the three things that cause this number to be so high.

1. Too many people below the free throw line on offense

Normally when a shot goes up on offense, the rule is to have two people (most of time this ends up being the two guards, but it can be anyone) above the free throw line in order to have an easier time to get back on defense. Here is an example of what happens when there aren't two people above the free throw line on offense, and just how quickly NBA teams can get out in transition. 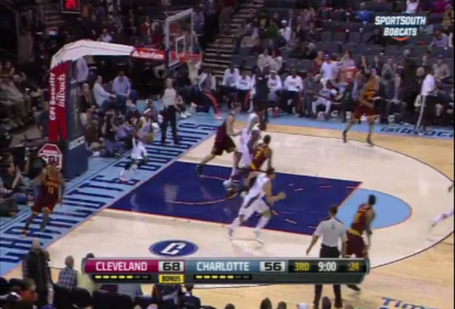 Here against the Bobcats, Tristan Thompson has just laid one in for two. He's below the baseline here. However, we also see Irving in the paint along with Zeller. Finally, Alonzo Gee is at the top of your screen, about a step below the free throw line. We have four guys below the free throw line here about a second after the basket is made. A made basket should never (ever, ever, ever) turn into a fast break for the other team, but here comes the pass from under the basket to continue the play. 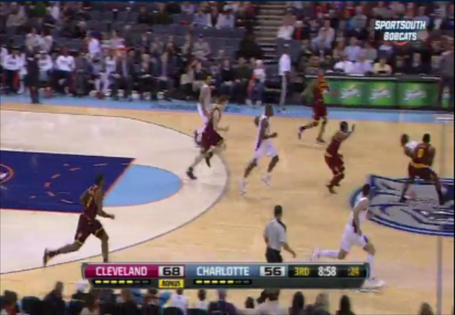 Kemba Walker has caught the deep pass that has gone over most of the defense's heads at half court (he's the guy behind C.J. Miles). We're about 2.5 seconds after the made basket by Thompson, and no one has made it past half court yet. Walker had to turn around to get the ball, meaning the defensive positioning here by Miles really isn't as bad as it looks. However, where the real problem is going to arise is at the bottom-right of your screen shot, where Jeff Taylor is streaking down the court hoping to get a pass. 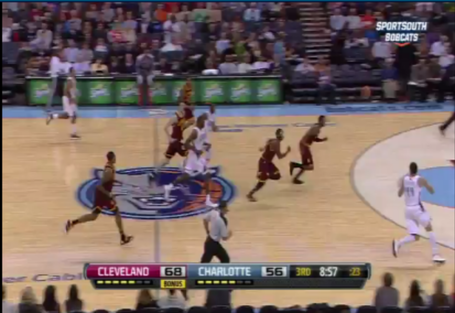 We're now at about 3.5 seconds after the made basket by Thompson and no Cavaliers have made it back to the three-point line yet. Walker has made the pass and Taylor is about to receive it with a wide open lane to the basket. This obviously leads to an easy dunk for the Bobcats after a made Cavaliers' basket. This is an example of how offensive positioning leads into defensive positioning, and the Cavaliers have been exceptionally bad at being in the right spots this season.

One question you may ask is if the Cavaliers' offense itself, which is heavily reliant on offensive rebounding, has anything to do with this. My answer to that would be no. The only two guys on the court with offensive rebounding responsibilities on the Cavs are the power forward and the center (statistically, this is evidenced by Irving, Miles, Waiters, Daniel Gibson and Gee averaging 2.9 offensive rebounds per 36 minutes combined). The three perimeter players should be communicating with each other to make sure that there is always a second man above the free throw line in order to prevent fast break opportunities. This leads directly into the second problem the Cavs have had.

Stopping the ball is the most important part of transition defense. The Cavaliers have been abysmal at stopping the ball in transition this year. For those unfamiliar, I'll explain. When getting back in transition, the basic thought is that you run back to a spot in front of the offense (about the foul line or the top of the key), picking up who has the ball in the meantime. Then, once in front of the offense, someone that is back on defense has to defend that guy (again, communication is key here) from continuing his drive. Here is an example of how the Cavaliers have failed in that regard this season. 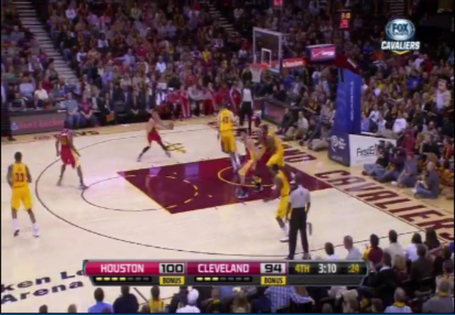 Here in their most recent game against the Rockets, Irving has just missed a shot and Jeremy Lin has gotten a somewhat long rebound. The Cavaliers have two guys back on defense which means this shouldn't be a problem since Lin is still below the free throw line (Gee at the left of your screen, and Irving is behind him). 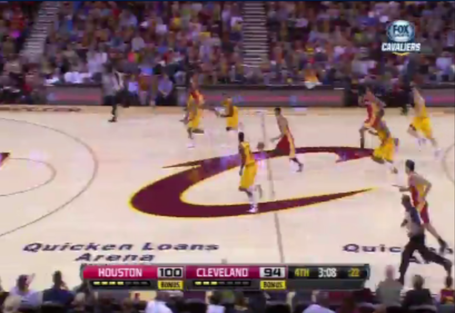 Lin is now at half court. This is pretty much the exact opposite of how a good team stops the ball. Instead of running back to a spot in front of Lin in order to get in front of him, Gee and Irving waited for him to get a full head of steam and are now running parallel to him. Miles, the Cavalier who has also gotten back past half court now, is apparently trying to bust back in order to get in front of Lin since Gee and Irving have shown no indication that they have any plans of doing so. Let's see what happens next. 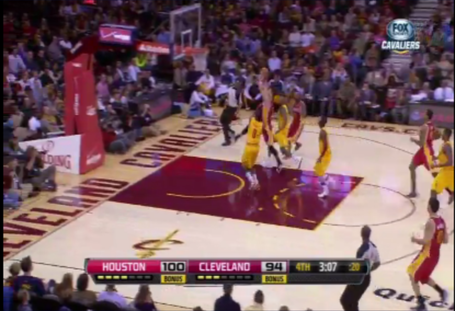 Lin, with that full head of steam, has easily gotten past Irving and Gee. Miles just had too much ground to make up and is unable to get back before Lin goes up for the bucket. Lin makes the basket, and Miles fouls him while trying to make up for Gee and Irving. This is simply an example of lazy defending. There is no reason why the ball shouldn't have been stopped there. The Cavaliers had two guys back, and Lin just burst by them even though they had about a four step head start on him. A failure to stop the ball has plagued the Cavs all season.

The main eventual goal of transition defense is to prevent easy layups or wide open threes. Wide-open threes normally come from trailers, which are supposed to be defended by defensive trailers. When wide-open threes happen in transition, it's normally because trailing defensive players are being lazy. However, easy layups are something that can be defended by those who are already back. This normally happens by filling the paint and making it more congested in order to create tougher layup attempts. Here is an example of a failure to fill the paint. 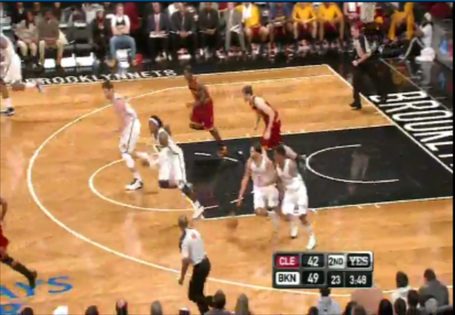 In a game against the Nets, Deron Williams has grabbed a long rebound. There are three Cavaliers back on defense behind all five Nets, meaning this shouldn't turn into a fast break. Oh how mistaken I was thinking this wouldn't become a fast break. 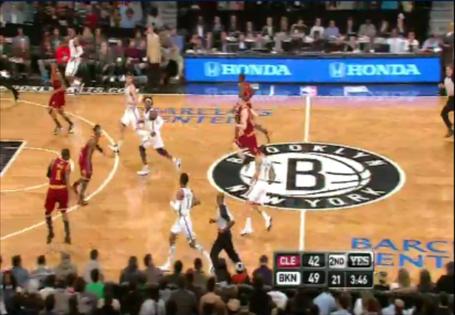 Instead of filling the paint, the Cavaliers have decided to pick their men up at the three point line. Why this is problematic is because both of the Cavaliers' big men, Zeller and Thompson, are trailing the play trying to get back. This is a normal occurrence in the NBA since most big guys are slower than guards. However, because the Cavaliers perimeter players didn't fill the paint here, Brook Lopez and Gerald Wallace (both at the top of the three point line) have a wide-open lane to the basket. Let's see which one of them Williams hits for an easy layup. 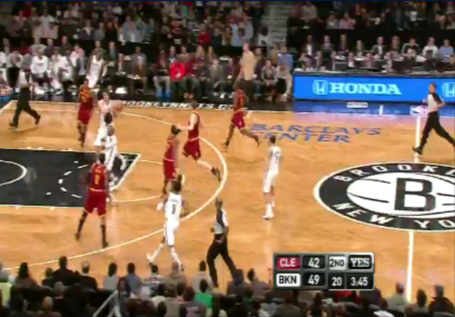 Well, looks like he decided to hit Lopez. Let's count the Cavaliers outside of the paint. One, two, three, four, five. Yes that would be all of them, meaning there is no one to guard the basket. Lopez gets an easy dunk here, and the Cavs go down by nine. Lopez actually killed the Cavaliers in transition that game, scoring nine points off of either scores or transition fouls that led to free throws. With transition defense like that, it's no wonder that an athletic big man like Lopez would be able to have his way with the Cavs on fast breaks.

These things are all correctable. They shouldn't be happening. All three of these are examples of the Cavs giving up transition opportunities when they shouldn't be there. The first one is after a made basket, the second one is a 1-on-3, and in the third one the Cavaliers had three guys behind all of the Nets. These things shouldn't be happening, but because of stupid, and in most cases lazy mistakes, the Cavs have become the worst team defending in transition in the league.