Is Andrew Bynum nearing a return?

Share All sharing options for: Is Andrew Bynum nearing a return?

About 45 minutes prior to Saturday night's preseason game between the Cleveland Cavaliers and Indiana Pacers, three members of the Cavs stayed out on the court working out after the rest of the team headed into the locker room: Kyrie Irving, Alonzo Gee and ... Andrew Bynum. Bynum would start under the baseline, sprint about 3/4 of the length down the court, all while developmental coach Vitaly Potapenko stayed with him pushing on him, before turning back around, sprinting just inside the foul line, posting up Potapenko (who was pushing him hard), catching an entry pass and finishing with a jump hook. He did this for about 15 minutes, and it is unclear how long he was out on the court before I arrived. He was making 15 footers, his free throw stroke looked good, and he finally left the court soaked in sweat. For the game, he was dressed in uniform, but obviously did not play. 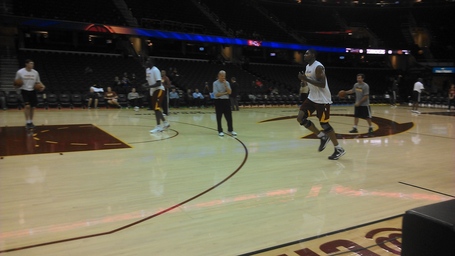 What does this mean? I have no idea. He didn't look limited to me. There wasn't a limp. He wasn't a speed demon but he wasn't when he was healthy, either.

Andrew Bynum running sprints on Q floor, taking jumpers and posting up. Looks healthy to me. I'm not a doctor, though

But this isn't just my reporting. Cleveland Jackson from Stepienrules.com and CavsZine (@WayneEmbrysKids) reported on similar things before the Cavaliers played the Pistons on Thursday night. And Jason Lloyd of the Akron Beacon-Journal had this to say:

Andrew Bynum is down to his "game weight," a league source said, and continues to inch closer to a return to the court with the Cavs. Bynum has hit every milestone the team has set before him without any setbacks, including participating in 3 on 3 half-court scrimmages with teammates during Wednesday’s practice.

Lloyd notes that while there still isn't a timeline on Bynum, he is getting closer to coming completely back, and has a league source saying that Bynum is happier than he has been in a long time. He even says the Cavaliers considered having him play in a few preseason games. He still isn't playing 5-on-5 basketball, and that will be the next step. This seems to be a situation in which the Cavs are being overly cautious; it is much more important to have a healthy Andrew Bynum in March, April and May than it is to have one in October. Rushing him back, particularly when the Cavaliers employ Anderson Varejao, just doesn't make sense. At this point, though, Bynum playing right now would look less like rushing him, and more like where he just naturally is.

Now, there remains cause for tempering the excitement. It was when Bynum picked up basketball activities in January for the 76ers that his knees starting swelling up again, and he ultimately never played a minute last season. Look at that the other way, and it appears that Bynum has been working pretty hard and hasn't had a single setback thus far in Cleveland. Over the summer I took a look at trying to figure out just what Bynum's knee issues are. It was incredibly hard. For example, Bynum had arthroscopic surgery on both knees this spring. Arthroscopic surgery can mean quite a few different things, and we don't really have a way of knowing exactly what was going on. A Philadelphia doctor was sources as saying Bynum has degenerative knees. There are reports he has arthritis in his knees. I don't know.

Maybe his knees are breaking down. He is 15 months removed from finishing a season in which he was All-NBA 2nd team. He missed a full year after a bowling incident and various knee issues bothered him. It is unclear whether he wanted to be in Philadelphia. Most of his knee injuries over the course of his career appear to be different types of problems, not necessarily of a recurring nature. That being said, if he really is out of cartilage in one or both knees, that would make him more vulnerable to issues in the future.

Caveat, after caveat, after caveat. But here is the thing: He looked healthy. He is happy. And when he is healthy, he gives the Cavaliers the potential to have two of the top 15 or so players in the entire NBA on the court at the same time. If you want a refresher on ways in which Bynum is offensively valuable, check out this piece from the summer Conrad wrote. Or this one from Sam. He is an elite presence in the post and is excellent at finding space offensively, especially for easy baskets on cuts. And when he is focused and motivated, his defense is pretty darn good as well.

I can't promise Andrew Bynum is going to play for the Cavaliers this season, but unless my eyes deceive me, I really think he will and that it will be sooner rather than later. Put me down as saying he will be back by November 15th.