Share All sharing options for: Monday Morning Musings: Anthony Bennett, the Cavaliers' ceiling, and chilling out

I'm not going to lie, these last two weeks haven't have been exactly what I was hoping for. While there's been some very positive things happen for the Cleveland Cavaliers (which I'll get to), there's also been some pretty disappointing things happen (which I'll also get too). That said, I feel like there's one over-arching theme that connects everything I've been thinking about these past two weeks; everyone needs to chill out.

Yes, YouTube clips from stupid movies are going to be a staple of this column. Deal with it. So here's what I've been thinking:

I really like contract year C.J. MIles. He's kinda like late-season-last-year C.J. Miles only.... wait for it... mas fresco. (That's his Twitter handle if you guys didn't get it. It's also spanish for "more fresh" or "cooler". It's a bi-lingual pun. Get it?)

The offense is pretty gross, but please, please, PLEASE, stop with the "Mike Brown offense" crap. Remember the Lakers? That team Mike Brown coached after he left Cleveland? They had the 10th best offense in the league in 2011. Remember when Mike Brown was fired the following year and everyone was yelling about how it was because "Mike Brown can't coach an offense"? Yeah, well, the Lakers actually had the seventh best offense in the league at that time. It was their defense that kept costing them games (a fact which became much more obvious throughout the year). The Cavaliers offense isn't slow and stagnant because of Mike Brown. It's slow and stagnant because the Cavs are a young team with a lot of new parts, including Jarrett Jack who has thrown off the backcourt chemistry a bit because he's new. Chill out. This will improve with time. Also, please stop with all the "Mike Brown rotations" crap for all the same reasons.

Jarrett Jack and Fred McLeod are a match made in accidental-comedy heaven. "Jarret Jack off the bench". "Jarrett Jack off-balance jumper". "Jarrett Jack offensive explosion". Don't act like you're not laughing at this. I know you are. We all are. Go ahead and laugh freely at this and it'll help you all chill out.

Anthony Bennett needs time to learn the ropes. Look, I get it. The first reaction we all had when the Cavaliers surprised everyone and picked Anthony Bennett was shock. That shock later turned into skepticism and doubt. It's only natural to look around the league and see other rookies dropping historic stat lines and 360 dunks and think "hey, maybe Chris Grant whiffed on that whole Anthony Bennett thing". I get it, I really do. I thought that way with Dion Waiters. The year before that, I thought the same thing about Tristan Thompson. Two years later, I'm pretty glad the Cavaliers have Tristan. In one measly year, Dion has improved massively. This might sound crazy, but Anthony Bennett will very likely improve. He needs time to adjust playing against bigger, faster, stronger opponents. He's coming off of a nasty shoulder injury and, as many of you have noticed, needs to play himself into shape. He also needs to learn his role on this team. Chance are, if you and I and Conrad and David and everyone else who writes for this site doesn't really know what he's supposed to be doing for this team, neither does he. Give the dude time. And I'm not saying give him a few months like some of you have been suggesting. Guys sometimes take years to really figure things out and hit their peak. Just be patient and give the kid some time to get back to 100% with his shoulder. 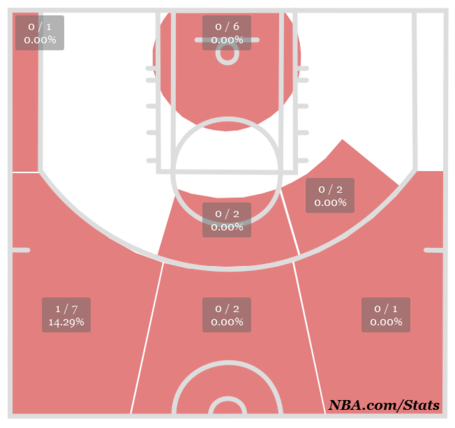 That said, this is totally gross and I totally understand why everyone is losing their minds. Also, "Antawn Jamison" auto-filled in search bar at NBA.com when I was pulling this, which totally makes me feel all kinds of sad and mad and angry. Stop taking three-pointers, Anthony. Chill out. Let off some steam.

One last quick thought on Anthony Bennett, before I move on...

Barf City (to the tune of the Tyga classic "Rack City")

11 deep chucks, only one hit

Got all the skill in the world, but can't hit a shot blecch

C-Grant says he's too dope, I ain't seein' it

Kid's rawer than an unbaked croissant

Grant, you know what it is

You should probably cool your expectations for the playoffs a little bit. Look guys, I don't want to sound like a pessimist or anything, but some of you really need to tone down your expectations for this season. Yes, I think the Cavaliers should make the playoffs, but I'm really not expecting much more than a seven or eight seed. Yes, maybe a fifth seed is possible, but that requires A LOT of things to go the Cavs way. Dion and Tristan both need to take the next step. Bennett needs to put things together. Anderson Varejao needs to get back into shape and stay healthy. Andrew Bynum needs to get back into All-Star mode and stay healthy and stop talking about retirement. Alonzo Gee needs to not play like Alonzo Gee. Chances are, not all of that is going to happen. It's very likely that the Cavaliers realistic ceiling for this season is that they'll wind up close to .500 and exit in the first round of the playoffs. This isn't a contender. The Cavs are still going to lose a lot of games this year. That doesn't mean the sky is falling. Anthony Bennett has room to fail and time to learn. Just relax. This isn't the Cavs year. I know how badly you all want it to be, but it just isn't time yet. This year is all about progress, not success. Aim your sites just a little bit lower and enjoy the ride. It'll be bumpy and sometimes really frustrating, but in the end the Cavaliers will likely improve a whole hell of a lot and Cleveland will see a few post-season games in April. Just don't ever forget where this team was just two years ago: 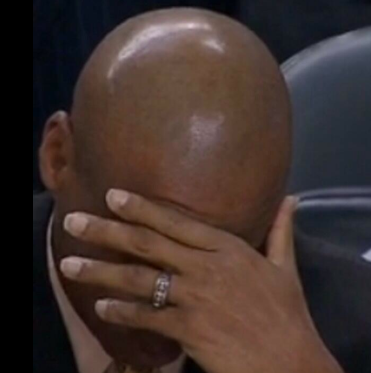 Chill out you guys.