The Cavaliers' Offense, and the 2-3 Set From Hell

The Cavaliers offense has been a problem this season, but there is one specific set that has been driving me crazy: the 2-3 low pick-and-roll.

Share All sharing options for: The Cavaliers' Offense, and the 2-3 Set From Hell

The Cavaliers' offense has not been particularly good been a flaming train wreck this season. Their offensive efficiency is at 93.5 points-per-100 possessions, which is good for a solid 29th in the NBA. They have an eFG% of 45.1%, 28th in the NBA. On the plus side, their TS% is higher at 49.2%, but that's still good for 28th overall.

So, despite having one of the best offensive weapons in the NBA, the Cavs' offense has been a complete dumpster fire. Why is this the case though? Are the players not playing well? The front office not constructing the team well? The coaching not putting the players in a position to succeed? What could possibly lead to this disastrous performance?

While it's most likely a combination of these three factors, in this space I'm going to make the argument for the coaching being substandard to this point. The Cavs have specifically been running one offensive set that has led to disastrous results so far: the 2-3 low high-pick-and-roll.

It's not exactly a 2-3 set, because I don't think there are any actual offensive principles at play here. It actually acts as more of a 1-4 low, but most of the time the big man setting the screen never bothers to actually get to the block. Normally, I'd call it the "Vomit-inducing, Offensively Inept" set, but for the sake of needing to call it something real in this space, we'll call it a 2-3 low pick-and-roll. The 1-4 low is not a bad set in and of itself -- as I'll explain later, there are wrinkles to make this play work -- but the way the Cavaliers are running it thus far is the problem. Here's the play: 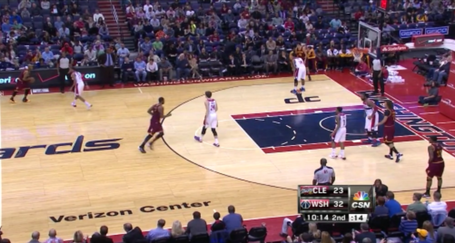 Here, Jarrett Jack, the 1, has the ball, with the 4 man, Earl Clark, on the wing; the 2 and 3, Sergey Karasev and Alonzo Gee, in the corners; and the 5, Anderson Varejao, on the block. Decent spacing there. 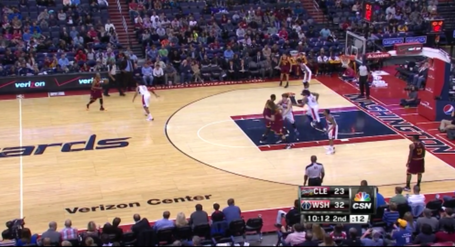 Clark, the 4, comes own to set a screen for Varejao, the 5, so that Varejao can get up to set a pick for Jack. Notice how Gee and Karasev are still in the corners. 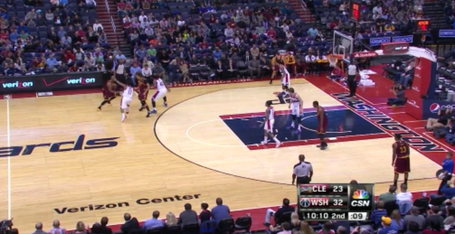 Varejao gets up to set the screen for Jack, but look at the issues that have already started. Because Gee and Karasev are STILL(!) standing in the corner, the man guarding Gee can move up into the area where Varejao would normally release to for an 18 footer on a pick and pop. Varejao's other option is obviously to roll to the basket, but there are three guys there waiting to help over because the Cavs' wings are stuck in the corners. This leaves Jack with two options: he can either get around the screen and make a suicide cross court pass to Gee in the corner that would allow the defense to either rotate or pick the pass off, or he has to make his way into the midrange to make a play. Let's see where it goes. 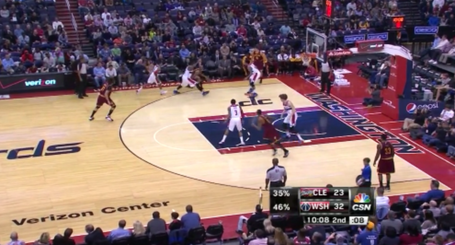 Nene, the Wizards' 5, forces Jack baseline, which destroys the Cavs' spacing. Varejao, an adept midrange shooter but non-three-point shooter, has to either dive to the basket, or move into the 18 foot range to become a weapon. Neither of these options are viable for Jack. Karasev and Gee are still just not moving. Jack still has the cross court pass, but it's a worse angle because it has to go directly through the the seven-foot Jan Vesely. He's essentially walked into a triple team because the corner guys haven't moved. What happens? 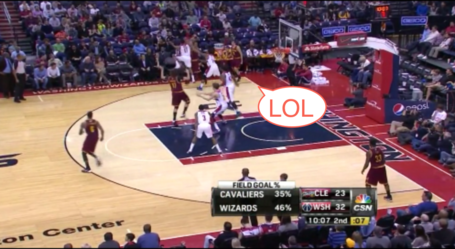 Uhh...yeahh. Jarrett...normally when you've dribbled a space where there are four men within six feet of you, you're going to have a bad time. But again, this isn't really his fault. Because the guys in the corners aren't moving (and because of the way the screen was initially set), he's automatically going to be doubled there, and it's going to be extremely difficult for him to make a pass to beat this defense. The spacing here is abysmal, there's no real option he can actually make that will lead to an easy bucket, so he does the only thing he can... 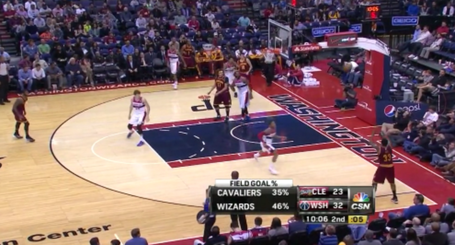 He makes the suicide cross-court pass to the guy in the corner. Gee still doesn't have the ball, and the defense has already rotated into position because, hey, it's really easy to rotate to a guy who hasn't moved the entire possession. By the way, there's only five seconds left on the shot clock now, because I know the guy I want to have the ball with five seconds left on the shot clock is Alonzo Gee. 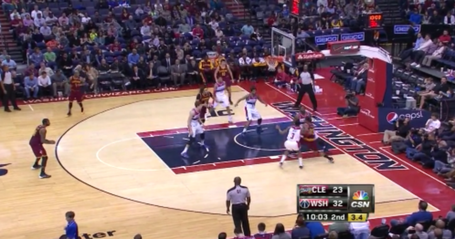 Gee miraculously pump fakes his way past Beal and into an impending triple team at the rim with three seconds left on the shot clock. Obviously, this doesn't end well. He turns the ball over, and the Wizards get a fast break.

Just in case you believe this to be a cherry-picked event from the second quarter, here are some other examples just from the weekend. These are just the ones I noted from the Wizards game, then some random ones I found in a two minute search of the Bobcats game:

I understand that the Cavaliers haven't been together for long, and that they have a new coach, and that there is obviously an adjustment period with new personnel. Having said that, I just have no idea what the offensive principles and ideals are at play here. It doesn't make sense to me. Two guys standing in the corner without any sort of movement for an entire set with one guy on the block while a pick-and-roll is set at the top is...well...not all that effective.

It clumps the defense around the rim, which essentially takes away both the roll to the rim and the drive to the bucket because of how easy it becomes to help onto the ball handler. It takes away the pop option from the screen setter unless he can shoot threes --  no Cavs' big can shoot threes -- because the weak side corner defender can cheat up into the midrange and still recover back if the point guard makes the cross-court pass. You're pretty much resigning yourself to a midrange jumper, which is the least efficient shot in basketball. But it's so prevalent within the Cavaliers' play -- especially when Jack is on the floor -- that it's hard for me to assume that this a player problem. It's actually making me sit here and re-think whether or not I think Jack has been put into the best situation to succeed when he's been the point guard on the floor.

The Cavs' offensive playbook hasn't been all that bad. They have started running quite a few more HORNS sets this year, which makes sense given that they have Jack and a PG that can shoot. When Miles is on the floor, seemingly they've been running him off of screens quite a bit when he's hot to get him some open looks at threes.

And of course, this set can be adjusted. If you look up at Picture #4, there is a pocket pass that Jack can make to Varejao. If he hits Varejao, Clark can then back screen Beal and Varejao can hit Gee in the corner and force Vesely to rotate out and contest the three. Vesely probably gets there, but at least it's ball movement where the Wizards are forced to rotate. I'd actually start that play by bringing Varejao up for his high screen with a Clark down screen, then sending Clark down to the baseline where he screens for a corner reversal by the two wings where they switch corners. Essentially, the coaching staff needs to add wrinkles to this play to make it so that the area around the rim becomes less clumped, which leads to either more options for Jack as the ball-handler or more movement for the team as a whole. I say that they need to start doing these things because these wrinkles have been nonexistent so far.

Standing around at the baseline needs to end because it makes for awful spacing and difficult shots at the most efficient place in the game: the rim. I'm not opposed to getting corner three pointers (they're extraordinarily efficient shots). However, the goal should be to get guys to the corners, not to start them there and camp them out for twenty seconds in the hope that Jack can miraculously draw the defense towards him for a kick out.