In the first piece about Dion Waiters today, we explore why he is so bad at finishing near the rim.

Share All sharing options for: 2013-14 Cavs' Season: Why is Dion Waiters so bad around the rim?

Dion Waiters is undoubtedly one of the most polarizing figures in the NBA. Some people -- okay, mostly Cavs' fans -- believe he has star potential as a past fourth overall pick in the 2012 NBA Draft. Others believe that he is a failed draft pick emblematic of Chris Grant's shortcomings as a general manager. While the reality is probably somewhere in between those two opinions, what is known is that Waiters just isn't quite there yet efficiency-wise on offense.

(Let's just ignore his defense for the sake of this post. He's not doing well there, but he has shown some improvement from last season as far as his instincts on rotations and generally away from the ball.)

His true-shooting percentage of 46.9% is about 5% below the league average, and his PER has dropped from 13.7 last season to 12.5 this season, still somewhat below-average. The team offense hasn't even been successful with him on the floor offensively, so he isn't making his teammates better either. The offense has not only looked better when Matthew Dellavedova is on the court with the starters, but also it's performed better statistically. The two-man lineup of Kyrie Irving and Matthew Dellavedova has an offensive rating of 120.2 in 57 minutes this season, while Waiters and Irving only have one of 99.2 in nearly 300 minutes. Only one of Waiters' seven most-common lineups so far this season has an above-average true-shooting percentage. I could keep going on, but otherwise this will get depressing and I don't want this to turn out to be a hit piece on Waiters' game.

The place where Waiters' game has suffered most this season is around the rim, where he is 22-60 for this season. He's shooting 36.7% in the restricted area this season. Here's his shot chart for evidence: 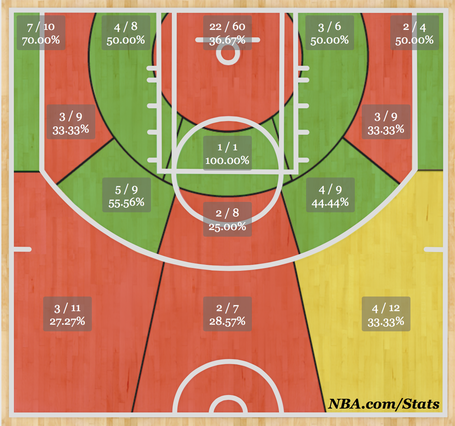 Including last season's mark, Waiters is now at 47% in the restricted area for his career over 398 attempts. Last season, league average from within nine feet according to HoopData.com was about 57%. I think we've reached the point where it is fair to say that Waiters is simply substandard around the rim and needs to re-evaluate some of the things that he's doing there. Given that he has a strong upper body and that he is tied for 24th in the NBA in drives to the hoop-per game at 6.4, learning to finish at the rim is going to be a critical development that Waiters needs to make. So what specifically is Waiters doing that makes him unable to finish? I believe that it can be narrowed down to three things.

First and foremost, Waiters seems to both drive aimlessly to the hole without an initial plan, but also then limit his options through making decisions too early upon receiving the ball. Be it from starting a spin move too far from the bucket, or just simply putting his head down and not looking for others sometimes, Waiters doesn't let the defense make the decision for him on his attacks. Lets take a look at an example of this in picture form: 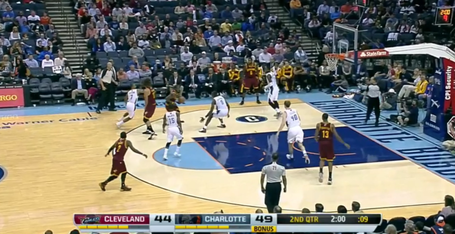 Here, we see Waiters come around a screen by Anderson Varejao where he's at this point isolated with Bismack Biyombo until Kemba Walker can get over to help from the top of the key or the small forward in the corner can double.

Waiters goes into a spin move. Biyombo attempts to body him up. Because Waiters went into this spin move, he's pretty much limited himself to either a kick out to the corner or an attempted shot at the rim. This makes him much easier to defend. Also, he's begun his spin quite early in his drive. It's going to be difficult for him to go up strong here being so far from the rim and with a larger defender on him. Let's see how this ends.

Biyombo shuffles his feet perfectly here and stays in front of Waiters' spin. Because he has limited his options with the spin, Waiters essentially has to read the help defender to decide if he's going to go up for the bucket, or kick it to the corner. The help defender holds for that split second, which means Waiters has to go up for the bucket despite being a lot farther away from it than he originally anticipated being. It's a tough short that's borderline not-makable. Here's the full video

The second thing that Waiters does on drives to the bucket is his tendency to bring the ball to his waist before going up for a layup, which gives the defense an extra split second to react to his going up. Not only does this make for difficult shots with hands in his face, but it also leads to his shot being blocked consistently. Waiters is being blocked on 12% of his attempts this season, and his 1.5 attempts blocked per game are tied for sixth in the NBA. Getting blocked less is obviously a good thing, and if Waiters can adjust his style that could lead to an increase in field goal percentage. For instance, if you watch how James Harden goes to the rim, after his gather step he always tries to keep the ball either chest or chin high -- even when going for a finger roll. Here is a spliced video of examples of Waiters bringing the ball low and then getting blocked while going up for a shot.

Finally, Waiters has a tendency to attempt the acrobatic lay-up in order to avoid contact as opposed to simply absorbing contact at the rim. One of Waiters' greatest assets coming into the league was his NBA-ready body and what should have been an ability to absorb contact better than most other guards. But instead of absorbing that contact, Waiters tries to utilize his ability to control himself in the air to make the perfect, highlight-reel lay-up instead getting his points at the free throw line. Here are examples:

A combination of these factors has led to the Waiters being a dumpster fire problematic at the rim this season. In order to be better, he needs to let the defense make his decision for him. Once that decision is made, he needs to go up decisively and strongly to the hole while keeping the ball chest-high.

Against the Heat, he did all of these things. When the defense collapsed on him, he made the right pass to the corners. When it was a one-on-one situation, he went up quickly without doing any sort of dancing in the air. A Dion Waiters that makes the correct decisions, and spots up more -- we'll talk about this in the next piece today -- as opposed to driving aimlessly to the hole, is an actual serviceable basketball player that does a lot of excellent things on the court. If Waiters can get that percentage up to about 50-52% by the end of the season, that would be a very good thing for the Cavaliers.