In the second piece of the day, we discuss how Dion Waiters has become a very real spot-up shooting threat when he actually decides to spot up.

Given that we've now discussed Dion Waiters' biggest problem, let's talk about the biggest thing that Waiters has improved since entering the league: his spot-up three-point shooting.

Overall, Waiters is shooting 41% from three-point range this season. He was a solid spot-up shooter in college, shooting 36% from three with 77% of his three pointers coming off of assists. While in the NBA, his overall three-point mark has gone down while his spot-up/catch-and-shoot mark has flourished. Last season, Waiters shot 41.5% on 89 attempts from beyond the arc in spot-up situations according to Synergy. This season, he's increased that mark to 52% while nearly doubling his attempts per game. While 52% is probably unsustainable, Waiters has worked on his jump shot this summer and it looks much smoother coming out of his hand in catch-and-shoot situations. Let's take a look at the mechanics of his jumper and see if the growth looks to be sustainable at above a 45% clip.

Here is last season on a three from straight on (I apologize for the ugliness of this picture): 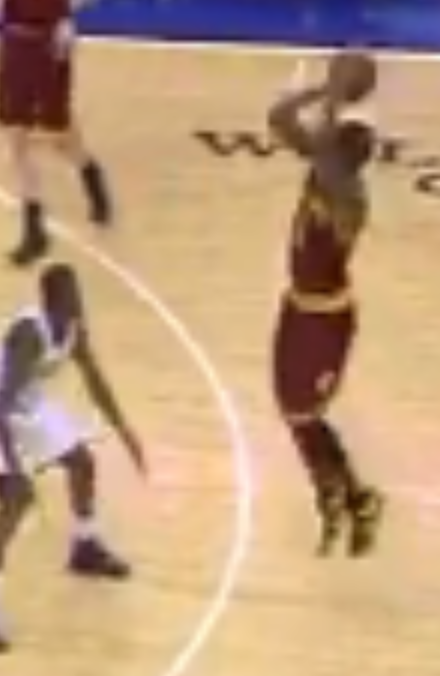 This is a three pointer that Waiters missed, and it's pretty clear to see why. First off, look at his legs. Instead of going up with a balanced jump, Waiters here flexes his legs backward as opposed to extending them, which entirely knocks off the balance of his shot. Instead of going straight up and down, Waiters doesn't even come close to landing in the same spot he jumped from. He lowers the ball to his forehead in the same direction that his legs flex. Instead of keeping the ball high in order to get a quick release, he starts it high, lowers it, then brings it back up. This means that his release and follow through is going to be inconsistent. The overall mechanics here are kind of a mess, despite making a high percentage of these shots. Had he kept these same mechanics, I would have assumed that the 42% was unsustainable. Now, let's take a look at this season. 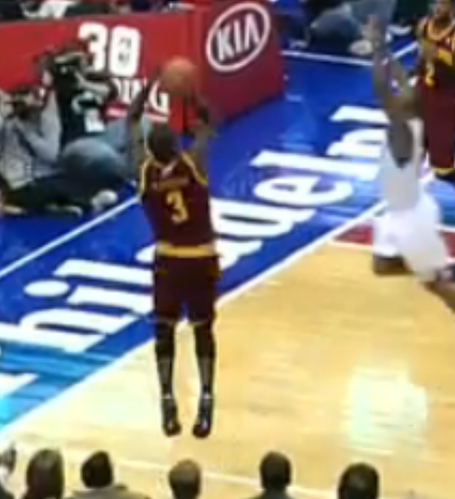 Here, we see Waiters going up for a corner three. His jump looks balanced without any sort of fadeaway that became all-too-common last season. Here, he lands right where he initially jumped from. This balance is key for Waiters. To top that off, his elbow looks to be in better position, the ball doesn't flex all the way back to above his forehead and his release looks much smoother without any sort of hitch. It's a quicker release that allows for more consistency throughout his release and follow through.

Clearly, Waiters has improved his jump shot mechanically despite the field goal percentage statistic not looking any better at 40% right now (as mentioned earlier today, his percentage at the rim has plummeted). The shot charts from this season bear that out:

So far, Waiters is shooting slightly better in the midrange along with much better from three-point range. However, the place he's seen the most improvement is in the corners. Waiters was a substandard shooter from the corners last season, but in a small sample of 14 threes so far this season he's at 64%. While this sample really can't be trusted, the revised mechanics on his jumper can be. It's probably a pretty fair statement at this point to believe that Dion Waiters, when open and willing, can be a threat from three point range.

However, the problems lie within that last sentence. First and foremost, Waiters really isn't strong at all when catching and shooting in the midrange. The Cavs don't give him many opportunities to do so -- he had under 35 midrange catch-and-shoots by my count last season, mostly off of screens -- but Waiters is not at all efficient in these situations shooting under 40% throughout his career. Given that the midrange jumper is the most inefficient shot in basketball if you can't convert it at a high percentage, I wouldn't really have an issue with Waiters completely excising that portion of his game and simply becoming a Harden-lite that only takes threes and lay-ups.

The second problem though is that Waiters' initial instinct upon receiving the ball does not seem to be to catch and shoot. He normally wants to put the ball on the deck and dribble, which leads to inefficient midrange jumpers, a lesser three point clip, and attempts around the rim. This is why Waiters averages over six drives to the hoop per game and over three pull-up jumpers per game. Of course, if the offense was getting better ball-movement as a whole it would probably lead to more catch-and-shoot chances that he would not be able to pass up, but it does go hand-in-hand with he, Jarrett Jack and Kyrie Irving's tendency to dribble.

This is all an extremely long-winded way of saying this: Dion Waiters has legitimate basketball skills that the Cavs need to find ways to take advantage of. One of these is spot-up shooting. If the Cavs can find a way to get Waiters more spot-up opportunities, his efficiency would rise. However, he must work together with the coaching staff. His first instinct upon receiving the ball needs to not be to dribble if he's in position to take a shot. The ball-movement on offense needs to be better. If the team can get better movement both with the ball and with off-ball movement, such as screening and back-cuts, it would create better spacing in order to allow Waiters to take better advantage of this skill. But that's for another post.