Tristan Thompson has had an up and down season. Right now? Trending up.

Ever since Kyrie Irving ran away with the Rookie of the Year award two short seasons ago, the hunt has been on for a second star to pair with him. There hasn't really been any time when Tristan Thompson was considered a real prospect to fill the role. He gave every indication in his second season of having a future as a serviceable power forward who could rebound and maybe defend at an elite level, while also presenting roster construction issues for the Cavaliers in a league where bigs that can shoot are more valuable than ever.

And then Tristan Thompson switched hands this summer.

And then, in the first two games of the 2013-14 season, Thompson scored 39 points on 58% shooting, recorded 20 rebounds and was 11-14 from the free throw line. It was just two games, but the 22 year old made you think that maybe, just maybe the NBA and the people who follow it should re-calibrate their views on just what Thompson can be.

Sam Vecenie and Tyler Lashbrook discussed some of the hot prospects for the 2014 NBA Draft. Oh and they also discussed Marshall Henderson. Check it out.

But Tristan Thompson switched hands this summer. The Cavaliers as a whole have been awful offensively. After going through training camp and the preseason playing next to Anderson Varejao, Andrew Bynum was dropped into the starting lineup next to Thompson. Over his next 14 games, Thompson's great start looked like a cruel mirage. In 32 minutes of play a night, Thompson was scoring 9.3 points with 9.1 rebounds per game on 37.8% shooting. His free throw shooting held up, and there were a couple nice games, but it was pretty ugly. The Cavaliers sank to 4-12.

Thompson's poor play caught the eye of Grantland's Zach Lowe. Lowe ostensibly set out to write about Thompson, but in some ways left Thompson blameless for his struggles. He blamed Mike Brown for a predictable offense, he blamed Bynum for clogging the paint, and he pointed to the Cavaliers' lack of outside shooting. As with so much of the Cavaliers offense we are left to wonder how much of it is Mike Brown being much more concerned with the team's defense and young, new pieces trying to mesh, and how much of it stems from players who just aren't very good.

Either way, Thompson hasn't been particularly good shooting the ball. 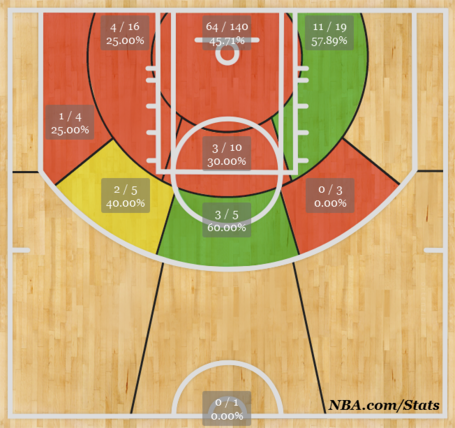 When he gets it on the right side, Thompson is pretty good at creating his right-handed hook shot and converts it. Unfortunately, Thompson has struggled badly around the rim, with his field goal percentage of 45.7 amounting to a full 10.8% below the league average. A good amount of these misses come from awkward tip ins or blocked shots that are a result of his own offensive rebounds, but that only excuses so much; if Thompson deserves credit for creating possessions for his team, the times they lead to his own misses detract from his signature skill.

There is good news. The Cavaliers have have won four of their last five games, and Thompson has helped key the run. He has been very good. 14.4 points on 10.4 shots, 13.6 rebounds, nearly five of which have come on the offensive glass where he has helped clean up misses from Bynum and others. His true shooting percentage, an awful 46.7% for the season, a much more tenable 55.6%.

Is it a lucky stretch? Another mirage from a small sample size? Is he learning to play off of Bynum and vice versa? Is the whole team slowly but surely putting together an offensive system? Giving some credence to the idea that perhaps Thompson and others are getting more comfortable with each other and the offense are Thompson's slowly rising assist numbers. Thompson was surprisingly capable passing from the high post last season, a part of his game that all but vanished in the first few weeks of the 2013-14 campaign. His nine assists in the last five games aren't great, but it represents improvement.

Dion Waiters has become the most polarizing Cleveland Cavalier. His style of play infuriates some and delights others. He shows just enough promise to make you want to discount his poor overall shooting. He works hard and wears his heart on his sleeve. The fourth former overall draft choice was reportedly in a locker room confrontation to top it all off.

It's enough that many of us have avoided looking at Tristan Thompson in similar terms. And yet, the similarities are kind of remarkable. Thompson is also the former fourth overall choice whose overall offensive statistics leave a lot to be desired. He plays ugly, but his demeanor both on and off the court makes him a fan favorite in a few corners. And yes, he was also reportedly in a locker room confrontation pretty recently.

So why is there less attention played on the inconsistent play of Thompson, and constant consternation over Waiters? I can think of a few reasons, of varying degrees of persuasiveness. Cavs fans might be punched out on Tristan Thompson; the divide over him in his first two seasons was exhausting. Thompson doesn't soak up offensive possessions. Thompson defends much more consistently. Thompson has a much more obviously friendly relationship with Kyrie Irving.

Really, though, it obscures an important point. Tristan Thompson has to find a way to sustain above average play. There are some nights where he imposes his will on the game, defending at a high level and adding possessions through his elite work on the offensive boards. Other nights, not so much. The Cavaliers are 8-7 when Thompson plays at least 30 minutes (he played 29:47 against the Knicks the other night; I am counting it). That isn't good, but it is with largely lackluster play from Kyrie Irving. They haven't won a game when Thompson doesn't reach 30 minutes.

We are at the time when Thompson can't be the great guy who plays well every once in awhile if the Cavaliers want to be successful. He has to be active and good. Thompson, at the age of 22, is a big reason why the Cavaliers win when they win. Where it goes, no one knows.

Stats courtesy of nba.com/stats and basketball-reference.com