As trade talk heats up around the NBA, let's take a look at what the Cavaliers might have to offer

The Cleveland Cavaliers are not a perfect team. Their 8-13 record is indicative of a young, flawed roster with a new coach. Things might be getting a little better, as the team has put together a nice little stretch of play. Continuity might be the most important thing the team needs right now as new players get used to their new coach.

Unfortunately, while there is a set free agency period, and a set draft night, the trade season never really ends. Teams that want to improve their roster or acquire future assets must always be willing to move on a deal, even if the timing isn't quite right. For whatever reason, the trade market seems to be heating up pretty early this year. General Manager Chris Grant proved last season that he didn't feel like he needed to wait until the trade deadline to make a move.

So before we jump into looking at what the Cavaliers can offer other teams, and how they might be perceived around the league, let me say that Anderson Varejao and future first round picks are the only substantial pieces I have a lot of interest in moving right now. If you can get a future asset back for Varejao, I think you do it, whether it is a young player with a good contract, or a future first round pick or both.

And one last note: I am trying to gauge how other GM's around the league might view our assets and players. I could very well be wrong. 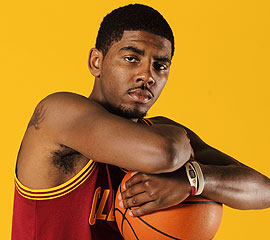 As Sam wrote in his mailbag, you aren't moving him. Unless LeBron James, Kevin Durant, or Anthony Davis is on the table, you keep and build around Kyrie Irving.

The Cavaliers 2014 first round pick, unprotected

At the top, this looks like it could be a historic draft, and quite a few teams have given up on the 2013-14 season in hopes of acquiring one of the top players who will be available. If the season ended today, the Cavaliers would have the 9th best chance of winning the lottery. Given the weakness of the eastern conference, the Cavs could very well be a playoff team. But maybe Irving doesn't rebound from his poor start, or the injury bug bites like it did last season. Cleveland fans have been laughing at the Clippers for failing to put a protection on the pick that became Kyrie Irving for years. It wouldn't be fun to have the same situation happen in reverse.

The Cavaliers should really only be open to moving their pick if a star level player became available. Putting a top 10 protection on the pick or something similar would still make it a valuable asset, and is something Grant can consider as well.

22 year old power forward who has shown the ability to be an elite rebounder for his position and a good defender. Has not proven he can be a capable offensive player. On a reasonable contract and will be under a team's control for at least next season, with the option to extend. Ultimately, his value to the Cavaliers is probably greater than it would be elsewhere around the league. The chance that he builds on his hand switch and can harness his athleticism to be a really good NBA player is high enough, for me, that I would be hesitant to move him.

Let me also just add: I have no idea how the rest of the league really perceives Thompson. Every GM is different. Just because I have him in this category doesn't necessarily mean I think he is close to untouchable or really that amazing of a prospect. It is a reflection, on some level, of the fact that the Cavs don't have any real blue-chip trade pieces if they were trying to get a bona fide star.

Is this the year? Finally could be

Despite a slow start the first couple games of the season, Anderson Varejao has been really good, and a major reason the Cavaliers have bounced back a bit as of late. His mid range jumper has been fantastic, he appears to be regaining some chemistry with Kyrie on the pick and roll, and he remains active defensively, even if I think his value on that end has diminished a little bit.

So why trade him? Well, he is healthy for one. I don't subscribe the idea that he is a ticking time bomb that could have a knee explode at any time, but the injury history is real and a factor to consider. He is playing now and his value is pretty high. The most likely landing spot for Varejao would be a team like Oklahoma City that thinks they are a piece away from a championship and/or want to get out of a bad contract like Kendrick Perkins. You could try and swing a first round pick away from OKC, as well as a young player like Jeremy Lamb or Perry Jones III.

Young, talented, and I don't know

Waiters is talented, 17 months from being a top five draft pick, capable shooting, has terrific upside, and doesn't seem to be valued by much of the league. We don't really have to rehash everything that has gone on with Waiters or not gone on with Waiters. It was reported by ESPN that the Cavaliers were accepting offers for Waiters, and that he would be alright with a trade.

I hope we don't move Waiters. His value isn't as high as his talent suggests it should be at the moment. If he really isn't getting along with Irving and Thompson, maybe you revisit it.

So there is that.

Ugh. Bennett has been historically bad in an incredibly small amount of minutes in which he is coming off major surgery, probably isn't in shape, has had his role moved around and changed and reduced. He isn't to blame for all of his struggles. He won't be this bad of a shooter forever. But as of right now, he looks like he could be a bust. Please note that I used the words "looked" and "could". In the meantime, if you offered him in trades now, it might look to other GM's like you are trying to get him off of your hands.

His contract isn't an albatross, given his likelihood to improve, but he isn't a lock to ever earn that money by any stretch. It would be fascinating if it wasn't horrible and sad.

Just turned 20. Might not be athletic or strong enough to ever defend or create off the dribble. Great shooter, smart player, good passer. A lot of team's liked him before the draft it seemed. Has some value around the league I would guess.

The Cavs have every one of their own 1st round picks in the coming years, and the rights to future Memphis, Sacramento, and Miami picks. You can check out the various protections on each of these picks here. First round draft picks are really valuable in today's NBA. NBA GM's tend to think they are smart and will be able to find value with their selections. Crazy, huh? These picks would be fine if the Cavaliers just kept them, but they can also be valuable sweeteners if the Cavaliers want to swing a big trade at some point.

It won't happen but there is probably some value there

Let's say Kyrie Irving breaks his leg playing the Orlanda Magic tonight, and a deal involving Varejao has been done for weeks but is just waiting for December 15 when new signees can be traded. The Cavs want to go into tank mode. In this case, Andrew Bynum might be valuable for a team trying to make a playoff push. I don't know, it could happen.

Or, a little bit more plausibly, let's say Andrew Bynum goes down tonight, or starts to feel pain in his knees, or starts to grumble about his role. His partially-guaranteed contract could be valuable to a cost-conscious team like the Chicago Bulls who could send back a bunch of salary to Cleveland (hey, Luol Deng), and then void the rest of Bynum's contract. Crazier things have happened, right?

As Conrad has said, Jack it's very unlikely Jack gets moved. You don't guarantee a guy three years and then move him immediately unless something has gone wrong. It's a bad look. The rest of the guys are fillers in trades for salary or depth purposes. Any of them could be moved and it wouldn't surprise me.

Given the unlikelihood that Bynum and Varejao are both back next season, and Zeller's age and pedigree, I do hope the Cavaliers keep him.