Anthony Bennett hasn't had a good start to his career. But he's reportedly getting in shape and trying to be the player he once was.

The Cleveland Cavaliers' first overall pick has been disappointing thus far. But that doesn't mean that Anthony Bennett can never prove to be a worthwhile selection. We're just about two months into his professional career and he's yet to show us much of anything that made the Cavs decide to take him at the top of last year's NBA Draft. But he's got time. He's got time to improve, time to grow, and time to make an impact.

According to Jason Lloyd of the Akron Beacon Journal, the man who continues to dominate the Cavs' beat this year, Anthony Bennett is focused on trying to be like he was back at UNLV.

"I just have to get back to the player I was in college," Bennett said. "I was playing with a smile on my face. It was fun, carefree, running up and down a lot. There's a whole bunch of stuff I can try to get back to."

The mentality is one thing -- Bennett rarely looks like he's having any fun on the court with the Cavs this year. And that comes with confidence. But the production and confidence likely won't be there until he can physically resemble the guy that was going coast to coast and dunking on people in college. Bennett knows this and has reportedly shed 12-15 pounds since he got into training camp with the team.

"Bennett has changed his diet and lost between 12 and 15 pounds since training camp. He has also taken to watching old films from his college days at UNLV, searching to find the spark that has vanished since he turned pro."

Of course, this is a guy who had major shoulder surgery and has the body type that probably doesn't cooperate when he isn't able to rigorously exercise. Bennett definitely does look a more mobile recently. He's always going to be a big guy, but that's part of what makes him unique. In college, he was able to be a big dude while remaining explosive and quick. It seems like he's getting back to that.

"Bennett is down around his college playing weight of 240 pounds after showing up to training camp grossly out of shape and overweight."

The other issues that Lloyd brought up in his article is that Bennett has been mainly a perimeter player this year. He hasn't seemed willing to get down and dirty in the paint and do damage. When you're as big and strong as Bennett, you ought to be pushing guys around in the paint and scoring easy buckets. But so far in his NBA career, Bennett has been content to stand behind the arc and jack up jumpers. That needs to change in order for him to be successful.

Here's the chart of Bennett's shot distribution so far. 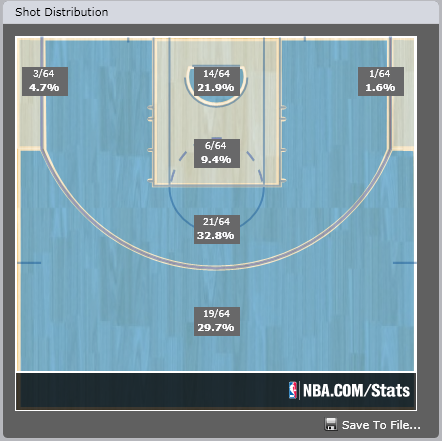 As you can see, over 60% of his shots are coming as above the break threes or in the midrange. That can't continue. There's a chance that recovering from this injury has played a role in his willingness to go inside. I had the same surgery as Bennett a year and a half ago and know that I was definitely not comfortable taking contact to my shoulder for a long time afterwards, even once I was cleared to return to physical activities. If he doesn't have confidence in his shoulder, he's not going to want to battle with 6-10, 275 pound guys under the basket. But over time, he should get back to that college mentality. This was a guy that played like a man amongst boys when he was just 19 years old. Yes, the Mountain West isn't the NBA -- but that shouldn't have disappeared forever.

Bennett hasn't given us many reasons to be hopeful this season, but getting his body right is a good place to start. Hopefully we'll see more explosive dunks and consistent play in the future.