Anderson Varejao and C.J. Miles are the Cavaliers' unsung heroes

The Cavaliers have been up and down this season. But who are the unsung heroes of this Cavaliers' season? Check it out.

Share All sharing options for: Anderson Varejao and C.J. Miles are the Cavaliers' unsung heroes

The Cleveland Cavaliers have had an interesting start to the 2013-14 NBA season. At the beginning of the year, they were atrocious offensively, but pretty solid defensively. In recent weeks, the offense has really improved and the defense has been up and down. Most of the attention from the media this year has gone to Kyrie Irving and his unexpected struggles, Dion Waiters and his alleged off the court issues, and Andrew Bynum's return to basketball. But as I was breaking down the stats for the Cavs' this year, I found two players that deserve a lot more attention than they've been getting: C.J. Miles and Anderson Varejao.

C.J. Miles claimed the starting shooting guard spot when Dion Waiters was relegated to his bench role. Anderson Varejao lost his spot in the starting lineup when Andrew Bynum became healthy enough to play every night. Both have seen their playing time decreased this year. But the numbers seem to indicate that the Cavaliers are much better off when at least one of them is on the court. Here's a closer look at how these two veterans are positively impacting the Cavs.

Miles is the official rapper and podcast introducer of Fear The Sword. He's also a pretty good basketball player. His season got off to an amazing start. He was shooting the lights out from behind the arc and was able to create effectively off the dribble and get to the basket. He was sidelined briefly with a calf injury and has just started to reclaim the deadly shooting stroke that he possessed at the beginning of the year. Before his injury, Miles was shooting 37.3% from three. Since his return on November 30th, he's shooting just over 31% from distance.

His individual numbers don't look all that impressive. He's playing just 18.7 minutes per game and averaging 8.5 points per game on 41.1% shooting. His PER is a pedestrian 14.1 and he isn't really contributing with assists or rebounds. So how can I make the claim that C.J. Miles has been one of the most important players on the Cavs this year? Because the Cavs are simply better when he's on the court.

Perhaps the area where Miles has made the most defensive impact is defending the corner three (the best jump shot in basketball). Overall, the Cavs have been quite bad at defending threes from the short corners this year. Opponents are shooting 43.8% from the corners against the Cavs and corner threes account for 7.8% of the total shots taken against the Cavs. When C.J. Miles is on the court, that changes. Opponents' shooting percentage from the corners drops to just 38.9% and corner threes account for just 5.1% of their shot attempts. When Miles comes off the floor, the opponents are shooting 45.1% from the corners and those awesome shots account for 9.0% of their total attempts. Those numbers clearly indicate that Miles is helping the Cavs' contest corner threes better and doing it so well that it's actually discouraging the opponent from taking those shots at all.

If you want to look at the data with your own eyes, here's the chart of opponent shot locations with Miles on and off the court.

Varejao has been a longtime fan favorite in Cleveland and he's been a player that has constantly improved. Last season he was putting up the best numbers of his career before he went down with a devastating injury and missed the rest of the season. He entered the 2013-14 season with a clean bill of health, determined to make it through a full NBA season.

His minutes are down considerably (36.0 per game last year to just 28.8 per game this year), but that has more to do with the addition of Andrew Bynum than it does with Varejao's on-court performance. The decrease in minutes means that his overall numbers are down. Furthermore, Varejao's usage rate is also down from a career-high 18.7% last year to just 13.3%. That means that his production per-36 minutes is also down. That said, his numbers per-36 minutes are still quite impressive: 10.1 points on 49.2% shooting with 10.8 rebounds. If they are trying to keep him healthy, it makes sense that the Cavs aren't featuring Varejao as much as they have in the past. But the numbers suggest that even at his current level of production, he makes a significant difference to the Cavs when he's on the court.

Over the course of his career, Varejao has gained a reputation as a defensive-minded player. He was named to the 2nd NBA All-Defensive Team in 2009-10. With that reputation has come the idea that Varejao is limited offensively. And while that may have been true earlier in his career, it is simply no longer the case. Varejao is highly useful in the pick and roll/pick and pop game and is a menace on the offensive boards. He has improved his midrange jump shot to make it a legitimate threat, which helps with the team's spacing on offense. Despite all of that, it might surprise you to find out that most of Varejao's value to the Cavs this year comes on the offense rather than defense. Again, these numbers are certainly affected by who Varejao is playing with and the fact that the Cavs have struggled to figure out how to play with Andrew Bynum so far. But even when you consider those things, Varejao's on/off court numbers are striking.

The next place to look is at the team's shot selection. It shouldn't come as a surprise that the Cavs shoot much better on midrange shots when Varejao is on the court (43.3%) than when he isn't on the court (36.7%). But his presence doesn't really change how many of those shots they take. Instead, Andy being on the court has a big impact on how often the team shoots in the painted area, but outside of the restricted area. That means little hook shots (that Bynum often attempts) or floaters or runners that aren't right under the hoop. As a team, the Cavs shoot just 40.3% on such shots (roughly average when compared to other NBA teams). The problem is that those just aren't very efficient shots, so you should probably avoid them and take more efficient shots instead (like three-pointers!). And when Varejeo is on the court, that's exactly what Cleveland does. When Andy is on the bench, the Cavs shoot 21.0% of their shots from paint (non-restricted area). When Andy is on the floor, that percentage drops to 14.1%. As a result, the Cavs end up shooting way more threes when Andy is out there. Three-pointers (a highly efficient shot) account for 25.1% of the team's shots with Varejao on the court while they account for just 19.6% of the team's shots when he's not in there.

Here's the chart if you want to check it out.

Not convinced? Varejao and Miles also show up in most of the Cavaliers' best lineups. I went to NBA.com and checked out the Cavs' best 3-man lineup combinations. I filtered the search to find the 3-man combinations that have played at least 100 minutes together this season. Then, I sorted them by net rating. You have to get all the way down to the 15th (!!!) best 3-man combination to find one that doesn't involve either Varejao or Miles. And then you have to go down 6 more before you find another one. Check this out. 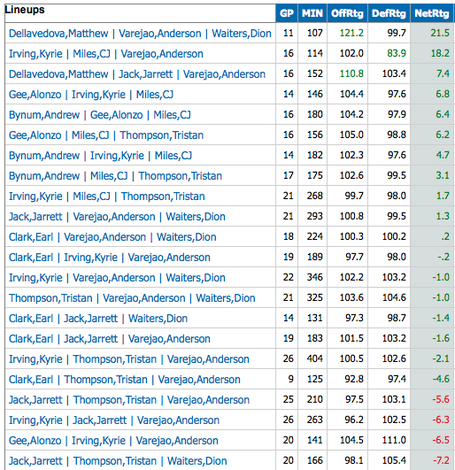 What does all of this mean?

Here's the important part. What does it mean? Honestly, I'm not sure. All I know for sure is that good things happen when either Anderson Varejao or C.J. Miles are playing. When they play together, it's pretty good too (net rating of +3.5 with elite defense in 114 minutes). So the easiest conclusion to make is that both of these guys need to be playing more often.

The next conclusion that people might want to make is that the replacements of these players are really playing poorly, thus skewing the statistics. Andrew Bynum, Dion Waiters, and Alonzo Gee haven't been great, but I'm not sure this is simply about them. If you look at the above chart, you'll see that the lineup involving Gee, Bynum, and Miles is actually pretty freaking good. And the Cavs are playing their best when Waiters joins Matthew Dellavedova and Anderson Varejao on the court. This leads me to believe that it's the combination of players that makes the biggest difference. We love to look at individual players' stats, but the unit that they're playing with has a really big impact on how they perform. It's important to find the right combinations to get the most out of each player. For example, it's an unmitigated disaster when Waiters and Bynum play together (net rating of -37.1 in 102 minutes). But things are just fine when Miles and Bynum play together (+6.1 net rating in 237 minutes).

I also don't think that it is a coincidence that these two guys are veterans that have been around for a while. They know how to defend, they don't make as many mistakes, and they know their roles within the team. The Cavs need a lot more of that and it's going to take some time for the younger players to learn how to do those things.

Based on this research, it seems that there are some really productive lineups that the Cavs can use. It's easy to say that the pieces on the roster don't fit together -- but that's not necessarily the case. It's up to Mike Brown and the rest of the coaching staff to look at the data and figure out which lineups are productive and which players really need to figure out how to play with each other. In the meantime, let's get C.J. Miles and Anderson Varejao some more playing time. And maybe never let Waiters and Bynum step on the court in a game at the same time ever again. Like ever.

(All stats come from NBA.com/stats)