The Cavs are not a good basketball team.

The Cleveland Cavaliers are not good at basketball right now. Sometimes they are good. This week, they are not. They let the Detroit Pistons walk all over them and got blown out, 115-92.

To be honest, I didn't think the first half was that bad for the Cavaliers' offense. They moved the ball and got good shots. The problem was that they couldn't make any of them. Here's the Cavs' shot chart from the first half: 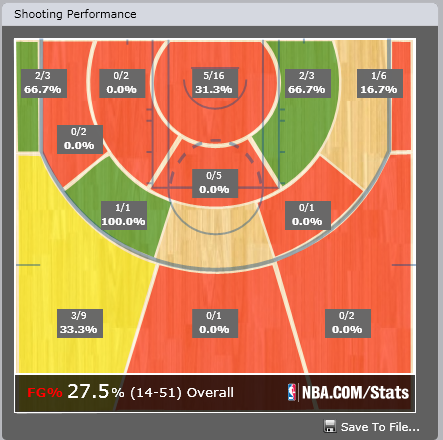 Really bad, right? They took a lot of threes and most of them were good looks -- but they missed a lot of threes. Andrew Bynum missed all 11 shots that he took in this game. I don't think he was really forcing shots or that the Pistons were really doing a lot to pressure him defensively. He just missed. A lot. Like, over and over.

Two veterans are making a big difference for the Cavs when they're on the court. Find out how Anderson Varejao and CJ Miles help the team.

The Cavs' defense was an all-around mess. They let the Pistons do whatever they want for almost the entire game. There was a few minutes at the beginning of the second half when the Cavs seemed to lock down defensively and tried to claw their way back into the game. They cut the lead to 10, but promptly collapsed again. It was like when I have a really good week of eating healthy and exercising, but then come home for the holidays and all of that goes out the window and I eat an entire bag of Chex Mix while I watch the Cavs lose to the Pistons by 23 points.

I'm not going to say that the Cavs are the softest team in the league, but they're probably in the top five. You know that I usually think all of those intangibles things are crap, but is there a single tough guy on this team? Dion Waiters is the only guy that comes to mind. Matthew Dellavedova and Anderson Varejao are gritty and play with lots of energy, but nobody on the roster really screams "screw you, we're going to destroy this opponent." When things start to go badly, they seem to just accept the fact that things are going badly. Nobody takes charge and rallies the troops. I might be making something out of nothing, but it's a little discouraging. The Cavs have no identity and they desperately need one.

It was garbage time, but I kind of liked watching the young guys get some extended minutes at the end of this game. Anthony Bennett has really gotten himself into better shape and looked pretty explosive on several plays. Dellavedova did a good job getting the ball to Bennett in good spots. Once he had the ball, Bennett was aggressive and made actual basketball moves. Of course, it was against Detroit's backups. But still.

Tyler Zeller also looked decent in that final stretch in the fourth quarter. He's definitely put on weight since last season and if Bynum is going to play this poorly, you might as well give Zeller some minutes. It can't hurt, right?

So the Cavs are now 10-17. They are atrocious on the road with a record of 2-12. They're much better at home with a record of 8-5, but they just got smoked by the Pistons. I have to think that Chris Grant is looking to make a trade because Dan Gilbert cannot be happy. Whoever they acquire better be a veteran and he better be somebody that can defend. Dion Waiters has missed the last three games with wrist tendinitis. It's apparent that the bench misses him, but one player doesn't prevent a team from getting blown out two games in a row. Hopefully he'll be back for the next game on Thursday against the Atlanta Hawks.