Did you get something Cavs related for Christmas? Share it with us!

Christmas is a wonderful time of year. The main reason that it's such a great time of year is because it's a perfectly excuse for your loved ones to support your unhealthy love for Cleveland sports. So if you got anything Cleveland Cavaliers related as a gift, take a picture and upload it into the comments here. If you add the picture in the comments and want me to throw it into the actual post, I'll update them as they come.

Personally, I already own a crapload of Cavaliers stuff, so there wasn't a whole lot more for me to get. But I needed a new hat and some flags to hang obnoxiously outside our house. 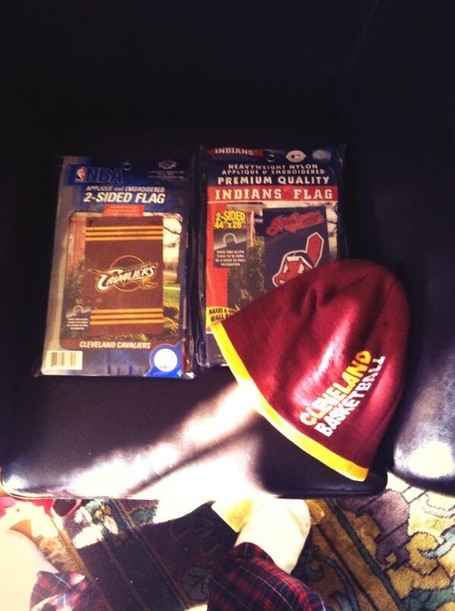 Here's some of the stuff that y'all got:

No, Angelo. That does not count.

One of my favorite things on Christmas is when young athletes retweet all of the people that got their jersey as a gift. I'm sure it's really cool to work all your life to achieve something and then see other people with your name on their back. It's also a nice gesture to show that they appreciate us fans. So did any of you guys get new Cavs' jerseys? Any tickets for future Cavs games?

SHOW US WHAT YOU GOT.