With the news that Andrew Bynum has been suspended for conduct detrimental to the team, let's take a look at some of the possibilities for a trade.

Share All sharing options for: Cavaliers Trade Speculation: Moving on from Andrew Bynum

Andrew Bynum has been suspended, and according to Jason Lloyd he's most likely played his last game as a Cavalier. However, even in the darkest recesses of the tunnel of despair that is the Cavaliers' season, a light shines dimly at the end of the road.

Brian Windhorst and Sam Amico are reporting that the Cavaliers have put Bynum on the trade block and are attempting move him before January 7, when the other half of his $12.5 million contract becomes guaranteed. A team can release Bynum before then and save $6 million from both their cap sheet and their actual dollar spend.

While I do believe that the most likely scenario is simply the Cavaliers parting ways with Bynum via releasing him, let's take a look at some potential options for a Bynum trade. 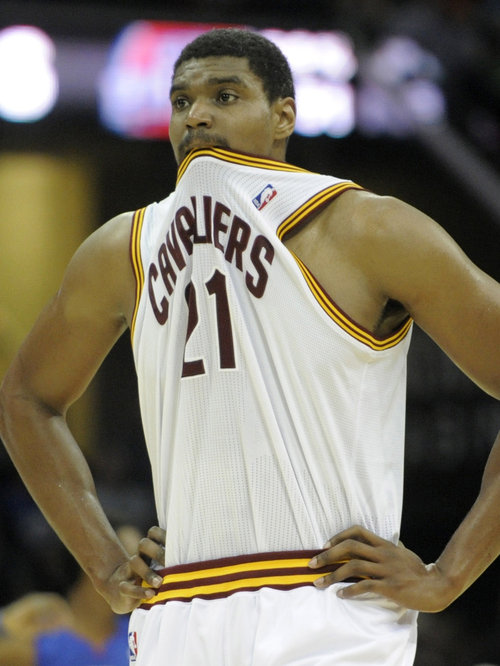 The Cleveland Cavaliers announced on Saturday morning that they have suspended Andrew Bynum indefinitely for conduct detrimental to the team.

So this seems to be the most likely scenario, right? Owner Jerry Reinsdorf is notoriously frugal as far as paying the luxury tax, and without Derrick Rose it seems that their season is off the rails. By trading Bynum's contract for Luol Deng and Erik Murphy, the Bulls could shed the requisite $8.2 million needed to get below the luxury tax line. Obviously, the Cavaliers would need to provide draft picks to make it work. The Cavaliers own all of their own draft picks through eternity, along with an oddly protected Memphis first round pick -- if Memphis finishes with the 6-14 pick in 2015/16, the Cavs get it, then it's just top 5 protected after that -- and a top 12 protected Kings pick that becomes top 10 protected after this season. They also own a Miami Heat first rounder in the future.

Of those picks, the Memphis one seems to be most valuable outside of the Cavaliers' own pick. I don't think that a Bynum plus either the Memphis pick or a top 10 protected 2014 Cavs first round pick for Deng and Murphy is enough to get it done, but weirder things have happened.

I guess I'll give Bill Simmons' Twitter thoughts credence for a second. He says that Bynum would consider going to the Celtics. Given Brad Stevens' comments from earlier, I'll assume that there's no chance this actually happens. But sure, I'll entertain this.

The Cavaliers have been connected with Jeff Green already this season, but there is no way that Bynum alone gets a trade done. My proposal on the Cavaliers' behalf would be something like Green and Courtney Lee for Bynum and one of the first round picks. Green is obviously valuable. Lee is overpaid at $5.3 million for the next three seasons, but he's still a useful bench guard that can shoot and play defense. The Cavs can turn around and move him if need be to get max cap room next season. The Celtics can get that contract off of their cap sheet, release Bynum, and save about $36 million over the next three seasons (Green has 3 years left at about $9 million per). They'd also pick up a valuable draft pick for the future. This would totally depend on how committed they are to making the playoffs this season. I don't hate that trade for either team, I just don't love it for the Celtics.

The Nets could save massive amounts of money by acquiring Bynum then releasing him. How much money? Let's take a look.

If the Nets were to trade Paul Pierce for Andrew Bynum their cap number goes from $102.2 million to ~$99.4 million. That brings them from $30.5 million over the luxury tax to $27.7 million over, which means they go from paying $87 million in tax money to $75.22 million. Those numbers are before they even release Bynum. If they release Bynum, that salary number drops all the way to $93.4 million. Now that they are only $21.7 million over the tax line, they would only be responsible for paying $51.4 million in luxury tax. So let's see their full salary sheet in all of these scenarios:

The Nets could save about $45 million by trading Pierce for Bynum, then releasing Bynum. That's an awful lot of money to save for a team that is 10-19 right now with injuries and head coach turmoil.

I threw the Clippers in here because I just wanted to mention that despite Sam Amick's report that they would be interested if the Cavs released Bynum, there really isn't a trade to be made by them for Bynum because of their salary cap situation. The Clippers will only be a player if Bynum is released. However, the Lakers do have a mercurial big man that is making around $19 million on their payroll this season who has seen some inconsistent results.

A Pau Gasol for Bynum and Earl Clark trade would push the Lakers below the luxury tax line while not affecting their salary cap situation next season. The Lakers don't particularly care about actually paying the luxury tax, but it would make sense for them to get below the tax line this season while losing due to the much more punitive repeater luxury tax. They would not be subject to the repeater tax next season if they got below the tax line this season.

I worry that Gasol would be miserable in Cleveland, but it would at least send a message to the team that they want to win now. Given that Chris Grant's job is on the line, I think it's clear that's where their head is right now. Taking into account what we've seen from Gasol this season, it probably doesn't make a great amount of sense for the Cavaliers. But hey, Grant's done dumb things in the past.

As I mentioned to start this post, I think the most likely situation is just the Cavaliers releasing Bynum and him never playing again. The Cavaliers are going to try to do their best to move him, but ultimately it would be a tough sell for most teams. Also, straight salary dump trades have become less common in the NBA due to the CBA, so the Cavs also have to contend with that trend.

It's a bad situation, and the sooner it ends the better it will be for the team. We'll get an answer for sure in about ten days. Until then, stay tuned at Fear The Sword, where we're glad that Booshs .gif gets to be used again:

UPDATE (3:55 P.M.): Sam Amico is reporting that there is no interest and the team likely will release Bynum: